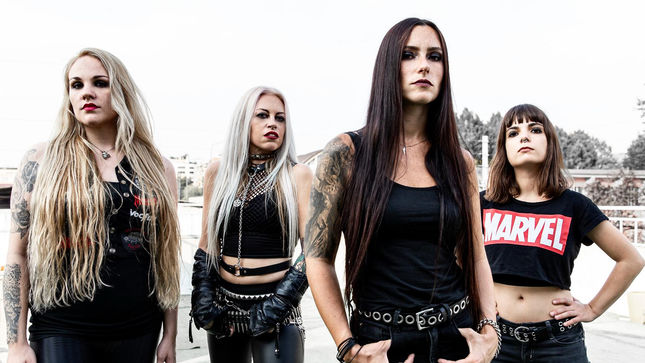 A boisterous, uncontrollable thrash/death metal assault led by the four women of Nervosa strikes another raging round with the release of their second single, “Perpetual Chaos”, cut from their upcoming full-length of the same name, out on January 22 via Napalm Records.

Along with a stunning lyric video, the powerhouse quartet delivers an undeniable round-house kick of uncompromising thrash and death metal elements, illuminating listeners worldwide with their bold and thought-provoking lyricism denouncing social evils. Their brand-new offering showcases the extremely multifaceted and indefatigably brutal vocal power off their new singer Diva Satanica, guided by the massive axe attack off founding member Prika Amaral and thundering support of Mia Wallace on bass and Eleni Nota on drums.

Their upcoming full-length album, Perpetual Chaos, marks the beginning of a new era whilst also underlining their critical, direct lyricism and style: From political grievances and amplifying the voices of minorities to protesting against factory farming, capitalism and succumbing to the ill-informed musings of social elites - these commanding women do not mince words.

Enter a thrashing world of destruction and be a part of the next generation of Nervosa!

Guitarist Prika Amaral comments: “It was a wonderful experience with these girls, they are all very talented and did an excellent job, I have never been so happy with the final result of a record. I chose Artesonao studio in Malaga, because it is isolated and in an extremely beautiful place, we worked hard but we had the best vibe between us.”

Watch the official lyric video for “Perpetual Chaos” below:

The band has launched a documentary series, which will be released in four parts. Part 1 can be seen below: