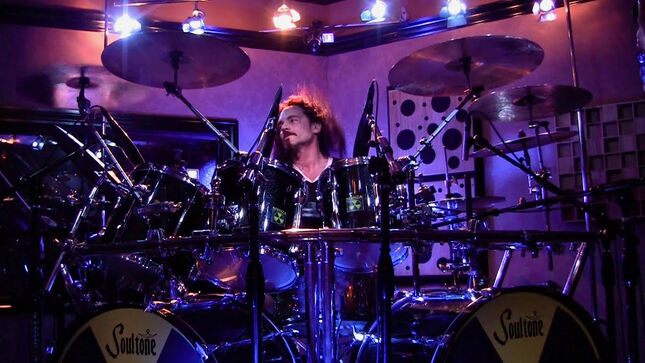 Available for streaming below is a short clip of late Megadeth drummer Nick Menza in the studio warming up and getting ready to re-track "Take No Prisoners".

Previously unreleased drum-cam footage of Menza playing along to the classic Megadeth song, "Hangar 18", can be seen below.

The HD video, shot in a two-camera-angle mix, was filmed in March 2014 at Uberbeatz Studios in Seattle, Washington and is believed to be some of the final studio drum recordings of Menza before he passed away more than two years later.

The footage was supposed to be used for the late drummer's first-ever instructional DVD, Intense Mega Drumming, that was to feature 10 re-recorded classic Megadeth drum tracks with tons of tips and tricks from Menza's arsenal to help teach anybody out there become a better player. The DVD which was produced and directed by Kari Pearson and Menza's manager, Robert Bolger has since been shelved.

The unreleased video footage and audio from the session will be a featured highlight in the recently announced official Menza documentary film, This Was My Life - The Story of Nick Menza.

The film will be the first-ever film to memorialize Menza's legacy and celebrate his life exactly how it was. It is described in a press release as "an unflinching exploration into the life of one of the most successful thrash-metal drummers of all time, authorized by the Menza family. From his childhood all the way through to the end of his life including a true blow-by-blow account of the repeated failed attempts of the classic 'Rust In Peace' lineup."

This Was My Life will feature rare and never-before-seen photos and video footage from Nick's archived VHS tape collection, personally filmed by Menza himself from 1988 through 1991. Included will be exclusive content showcasing Nick working at the studio, personal home movies, casual time and party time with his fellow band-members, as well as other well-known artists of the era that Nick toured with.

Menza's longtime personal manger Robert Bolger said: "I am very excited to be working with Screaming Butterfly Entertainment on Nick's official documentary. There's a lot of published misinformation out there about Nick that isn't true and I am very happy to bring the truth forth. Nick loved his fans and always said without the fans none this would be possible. I really think Nick's fans will enjoy this journey through his life."