NICKO McBRAIN - "IRON MAIDEN Never Had Hype, We Never Had Mainstream Press, We Did What We Wanted To Do And We’ve Been Fortunate" 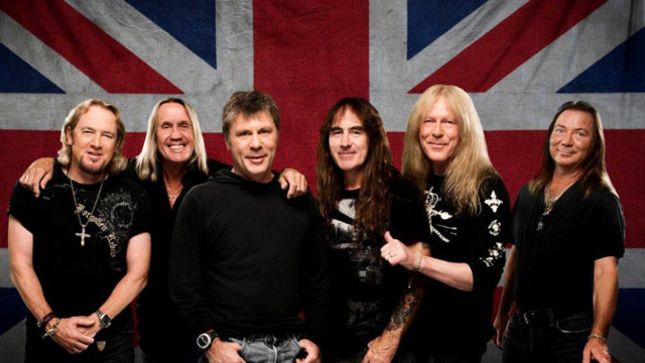 Speaking with Overdrive, Iron Maiden drummer Nicko McBrain discusses the future of the metal scene, and whether or not he feels confident in the younger bands carrying the flame once he finally decided to retire?

Says Nicko: “My feeling on that, is if they have a smidgen of the percentage of drive, passion and ferocity that we have as a band, along with being dedicated to what they are doing individually, as a musician and collectively with your brothers that you play with in the band, there will be hope there. You have to do it for the right reasons – a love of music and the brothers that you play with, is the foundation to having a working model that will survive the test of time.

“Its very hard to find to find 2, 3 or 4 guys, who are like minded and doing it for the right reasons. If and when you do it for the best possible reason – well, the best possible reason behind something that you’re doing, is that you’re doing the the best job that you can. If these young bands can have 5% of that energy and devotion, (they really need 100%), but 5% is a start, then you just carry on and don’t get lost along the way. That’s what so many bands do, they believe their own hype.

“Iron Maiden never had hype, we never had mainstream press, we did what we wanted to do and we’ve been fortunate. I’m not trying paint the picture that’s it’s easy. Especially today, agents don’t get behind you like they used to and record labels don’t finance you. The way to make the money in the industry is to keep your guys going and keeping it interesting, different and hardworking. It’s different than 40 years ago, but the same goal is there and some good old fashioned hard work will pay off in the long run. Where there’s a will there’s a way!

“The bad times is when you really get tested, God tests us with everything and it’s the same with music, so keep the drive and the passion. I do believe in these younger bands and they look up to us like “we want be like Iron Maiden”, but if they look behind the book if you like, (pardon the analogy), if they look behind the story and see how it works, what its all about, the essence of the band is always the same and it never changes. We choose this for life and that’s what we are sticking to.”

Read the complete interview at Overdrive.

The Book Of Souls World Tour will open in the US in late February with Ed Force One flying in for three shows before, in early March, heading into Central America visiting Mexico, followed by a much anticipated first ever concert in El Salvador and a return to Costa Rica. Ed Force One then proceeds into South America for concerts in Argentina, Chile and a number of shows in Brazil before flying back to the USA at the end of March for ten more cities covering the USA and, of course, Canada in the first two weeks of April.

Dates announced so far can be found here (with ticket links).