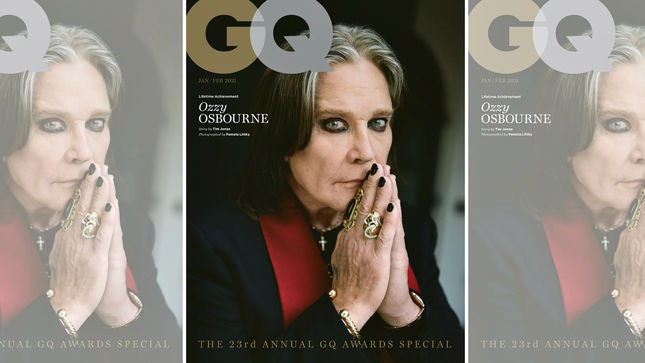 In an extensive interview, GQ Men Of The Year 2020 Lifetime Achievement Award winner, Ozzy Osbourne, regales with tales of days gone by, being petrified of cult classic The Exorcist, his passion for environmental issues, and recording the first Black Sabbath album back in 1970.

Read an excerpt below:

GQ: How did it affect you when your guitarist Randy Rhoads died? [In 1982, Osbourne’s tour driver, Andrew Aycock, took the 25-year-old guitarist up in a private plane along with make-up artist Rachel Youngblood; the plane clipped the tour bus and crashed.] I read somewhere that you’ve been on anti-depressants ever since.

Ozzy: "No, that’s not true. But it was a very depressing time in my life. Every time I talk about that the tape starts to run in my head of that day when he died. It was awful. It was like a bad fucking horror movie. The house was on fire. The bus had been hit by the plane. There was glass and gasoline everywhere. The fucking house was engulfed. And he was such a nice guy. A very gentle man, a very tiny man... but so powerful with his instrument."

GQ: Are you a religious man?

Ozzy: "I’ve tried reading the Bible but it’s in a fucking language that I don’t understand. Someone should do a version in my language: “And so Jesus said, ‘Fuck off!’ And lo, they all fucked off.”

GQ: Didn’t you once get a vicar stoned?

Ozzy: "Fucking hell... I’d bought some hash and I’d made a cake with it. I put it in a tin and went to the pub and I said to my ex-wife [Thelma Riley, whom he married in 1971], “Don’t let anybody eat this fucking cake. It will be bad.” Anyway, I came back from the pub a few days later..."

Ozzy: "...and I did a double-take, because the vicar was in our house, having a cup of tea in the kitchen with a piece of this cake. I hadn’t got a driving licence, but he was slumped in my kitchen, so I had to drag him out by his hair, push him in the back of his car, drive him to his door and then walk home. I didn’t see him for two weeks after that and I thought I’d killed him! Then I saw him in a pub on a Sunday morning and he said, “I must have caught such a dreadful flu at yours. I hallucinated for three days and had to miss church.” I was just relieved to see him. Fucking hell, he’s alive! Because that was a big chunk of hash."

Read the complete interview at GQMagazine.co.uk, and watch the video below: