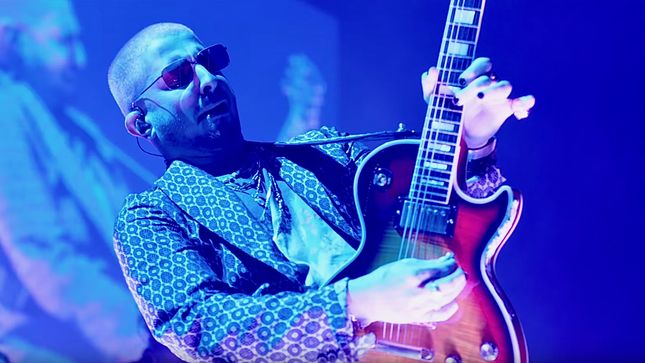 In a new interview with Billboard, Andrew Watt, who produced and plays guitar on Ozzy Osbourne's upcoming Ordinary Man album, talks about the experience of working with the Prince Of Darkness. An excerpt follows:

Billboard: How did you get Ozzy on a Post Malone song?

Andrew Watt: "One night Post was at the Rainbow Bar & Grill and saw this picture of Ozzy, and he bought it and took it home. When I heard that, I had this image of him walking down Sunset with that picture, and I was like, 'I gotta make a song for Post and Ozzy.' I've said insane s--t out loud before, and this was one of those times.

"I'd never met Ozzy before, but I had met his daughter [Kelly Osbourne]. I told her my idea and asked if she thought her dad would be into it. She's a Post fan, so she's like, 'Yes, absolutely.' Then Ozzy got really sick and was in the hospital, so it was like, 'He's gonna do it,' but then his health was taking longer, and it was like, 'Is he gonna do it?' I just kept staying on Kelly and [Osbourne’s wife] Sharon, and eventually they told me to come over. So we did it. That experience was incredible."

Billboard: How do you wind up making a full album with him?

"We wrote and recorded Ozzy's entire album, musically, in four days. There was no premeditation. The three of us just got in my basement, put on headphones, looked at each other, and wrote 12 songs, 10 of which constitute the album. It was magic. I don't even remember it.

"Then Ozzy came over to my basement to listen to the music. I played him all 10 tracks at full volume, and at the end he just goes, 'It's cool.' And my heart just f--kin' went into my gut. He was like, 'I'll call you tomorrow.' Stands up, gets his cane, goes upstairs. I go, 'Oh my God, he hated it! What do I do?'

"He calls me the next day like, 'Okay, so when do we start writing?' I sound like I'm making this up, but he comes over the next day, and we made Ozzy's entire album from top to bottom - all music, guitar solos, all vocals written - in four weeks. It's the proudest of anything I've ever been, because it brought the 12-year-old kid out of me again. Don't get me wrong, I love the pop music that I make, but this is what I feel like I was born to do: play rock guitar. I got to be f--kin' Randy Rhoads in 2019."

Ozzy recently released the official live video below, featuring his performance with Post Malone on his song "Take What You Want", live at The Forum in Inglewood, CA on November 21. The footage was filmed by Adam DeGross.

Ozzy's new single, "Straight To Hell", is out now and can be streamed below. It is available via all digital platforms here.

On the full-on rocker, Ozzy takes listeners to the heart of darkness - "Something is missing and you don't know why" - with Guns N' Roses guitarist Slash along for this devilish ride, delivering scorched-earth riffs. Stay tuned for the official video, coming soon.

Ozzy previously released "Under The Graveyard”, his first new solo music in almost 10 years. A massive ballad that builds into a searing rocker, it's the first single from Ozzy’s forthcoming album, Ordinary Man, due out on Epic Records in early 2020. Get the song here, and listen below.

"This album was a gift from my higher power - it is proof to me that you should never give up," Ozzy says. “And this is quite possibly the most important album I have done in a very long time, probably since No More Tears."

"It all started when [his daughter] Kelly comes in and says 'do you want to work on a Post Malone song?'" Ozzy explains. "My first thing was 'who the fuck is Post Malone?!' I went to Andrew's [Watt] house and he said we will work really quick. After we finished that song, he said 'would you be interested in starting an album.' I said 'that would be fucking great, but now I am thinking I don't want to be working in a basement studio for six months! And in just a short time, we had the album done. Duff [McKagan] and Chad [Smith] came in and we would go in and jam during the day and I would go work out the songs in the evenings. I previously had said to Sharon I should be doing an album, but in the back of my mind I was going 'I haven't got the fucking strength...' but Andrew pulled it out of me. I really hope people listen to it and enjoy it, because I put my heart and soul into this album."