Petition Launched To Have The Queen Honour BLACK SABBATH For Services To Music And Birmingham; Video 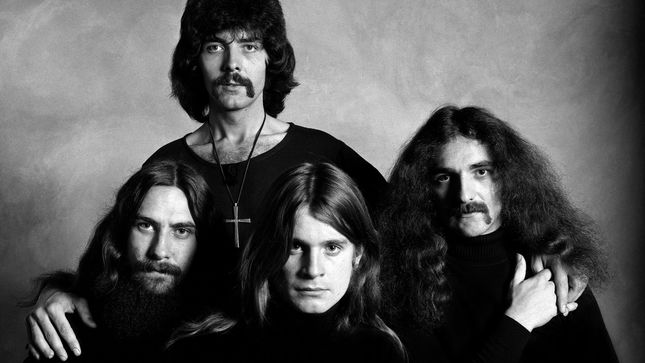 Politicians from across Birmingham have used the ‘heavy metal’ bench on Westside to launch a campaign for a royal honour to be given to rock legends, Black Sabbath. The new demands follow the band’s “barnstorming” surprise performance at the Commonwealth Games.

Perry Barr MP Khalid Mahmood is leading a cross-bench selection of MPs and council leaders who have written to the Queen to ensure the rock group, formed in 1968, are finally given the “recognition they deserve”.

Mr Mahmood has also started a petition after being inundated with requests from constituents requesting that Black Sabbath be honoured for services to music and to the city of Birmingham.

The campaign comes after frontman Ozzy Osbourne and guitarist Tony Iommi performed their classic hit "Paranoid" to a roaring 30,000 strong crowd amid fireworks at the Alexander Stadium, Perry Barr, during the closing ceremony last Monday (8 August).

“The reason why I’m writing to the Queen with my colleagues is to say look, there’s been a glitch here, let’s put that right,” said Mr Mahmood. “These guys have been missed out by the system for over forty years of great music and accolades across the world.

“They came to the Commonwealth Games closing ceremony and were absolutely fantastic. They didn’t charge a penny and – even with Ozzy’s health not being good – they came and showed that they’re still Brummies and have a great love for Birmingham. We should then recognise the commitment they’ve given to the city.” 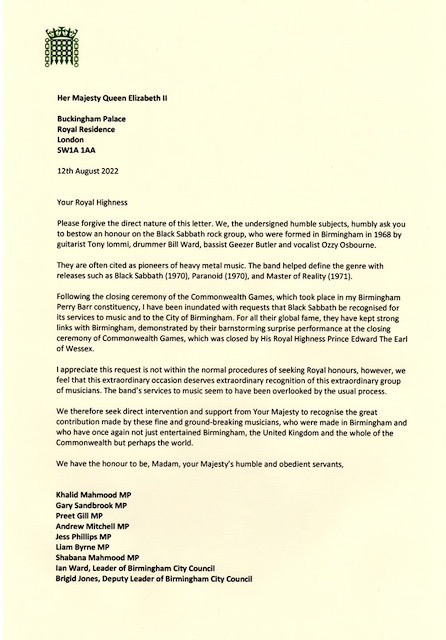 In their letter to the Queen, the group of politicians write: "They are often cited as pioneers of heavy metal music. The band helped define the genre with releases such as Black Sabbath (1970), Paranoid (1970), and Master of Reality (1971).

"For all their global fame, they have kept strong links with Birmingham, demonstrated by their barnstorming surprise performance at the closing ceremony of the Commonwealth Games.

"We therefore seek direct intervention and support from Your Majesty to recognise the great contribution made by these fine and ground-breaking musicians, who were made in Birmingham and have once again not just entertained Birmingham, the United Kingdom and the whole of the Commonwealth but perhaps the world."

Since their first album, Black Sabbath have sold over 70 million albums worldwide. Rolling Stone magazine once said they had ‘changed music forever’ and called them ‘the Beatles of heavy metal’ while Time magazine called Paranoid ‘the birthplace of metal’.

Mr Olley said: “It’s a pretty special day because it’s not often that all of Birmingham’s MPs come together to demand the same thing.

“Black Sabbath have put Birmingham on the map. For years unfortunately, we ignored Black Sabbath but, since the Black Sabbath bench has been on the bridge, we get at least a million visitors every year. People have pilgrimages to come and have their photograph taken on this bench. Their legacy is astonishing.”