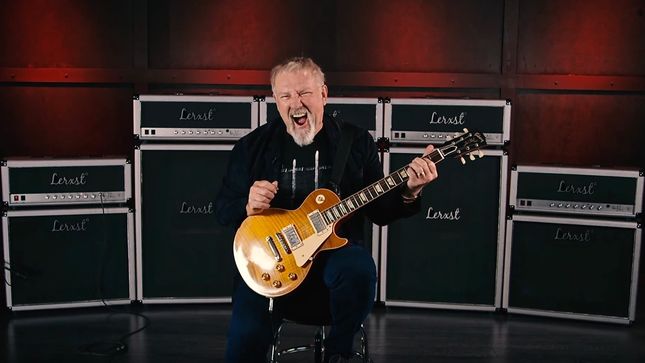 In this new video from Sweetwater, Mitch Gallagher is joined by world-renowned guitarist Alex Lifeson for a special interview.

Lifeson commissioned the amp gurus at Mojotone to build him a tour-worthy re-creation of a legendary, 50-watt amp head from across the pond.

The Lerxst Omega boasts all the same features as its silver-trimmed predecessor, including a 3-band EQ, two footswitchable channels, a Rhythm Clip mode, and a serial effects loop. The Lerxst Omega is top-shelf all the way, with high-end components like Mojotone Dijon caps, Heyboer transformers, CTS pots, and JJ tubes. Handwired in Burgaw, North Carolina, the Lerxst Omega delivers the full gamut of classic British tones.

This Lerxst Omega has been hand-signed by Alex himself and includes a custom serial number plate and certificate of authenticity - and you can only get these autographed versions at Sweetwater. There's only 100 of these available, and they won't last long, so order yours today.

On October 11, Rush will release Clockwork Angels Tour in a 5LP vinyl set.

This live 5LP set is pressed on 180-gram vinyl, and includes an etching on the flipside. The set comes packaged in a two-piece telescopic box with a full-color booklet, and a code to download a high-definition digital version of the album.

The band recorded concerts in 2012 in Phoenix, Dallas and San Antonio for a live album, and this set includes all 31 tracks from those recordings. This vinyl set also features the bonus tracks from the original CD release, including a version of the classic “Limelight” that the band recorded during soundcheck.

You can pre-order the Clockwork Angels Tour 5LP Vinyl now at Rush Backstage.

Rush: Wandering The Face Of The Earth - The Official Touring History, the new book from Skip Daley and Eric Hansen, will be released on October 29. Pre-order from Rush Backstage and receive a free gift.

Fondly known as the Holy Triumvirate, Rush is one of the top bands to shine through rock-and-roll history. Wandering The Face Of The Earth covers Rush's storied touring career, from their humble beginnings as a Toronto-area bar band playing middle school gymnasiums to their rise as one of the world's most sought-after live acts, selling out massive arenas around the globe. This book includes every setlist, every opening act, and every noteworthy moment meticulously researched and vetted by the band themselves. This is THE must-have tour compendium for Rush fans.

On top of the meticulous research done for this book, the Rush members themselves worked directly with Insight Editions to ensure the veracity of every detail. There are also a number of exclusive, never before seen photos provided by the band members that further the narrative even more, showing a life on the road that may never be equaled.

Includes a foreword from Primus’ Les Claypool, and an afterword by The Police’s Stewart Copeland.