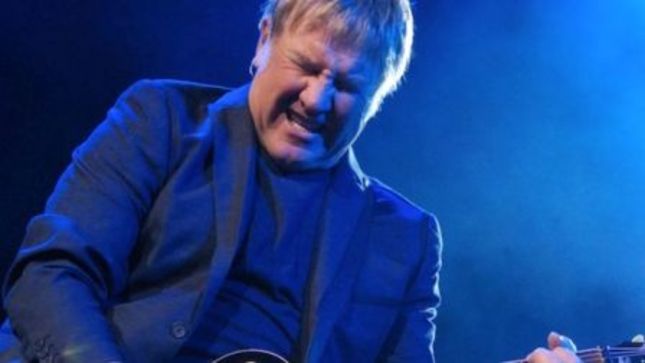 Guitar Connoisseur Magazine recently caught up with Rush guitar legend Alex Lifeson. Following is an excerpt from the interview:

GC: When I think back to your first solo album Victor, the tracks At The End and Victor come to mind, they’re so different using ambient textures and spoken word, you surprised a lot of people, even your manager wanted you to make a blues album. Do you think you’ll ever make another solo album?

Alex Lifeson: "What I enjoyed most about making that album was the variety of the material. It was a wonderful opportunity for me to explore and expand on certain genres of music that were not necessarily open to me within the context of Rush. The workload was relentless, and I seemed to be working on that album every day for a year, but it was enormously satisfying for me as a songwriter, producer, and musician. I don’t have the same drive to jump into a project like Victor at the moment, but I do have hours of material that does inspire me to at least consider such a thing."

GC: With your vast experience as a touring musician in the early days with bands like KISS and Aerosmith, you must have an endless array of material for an autobiography, any interest in one day documenting these stories, or is it best left unsolved?

Alex Lifeson: "Well, that was a very long time ago, and although I do remember some things, I don’t think I remember enough to make compelling reading. It almost seems like another life ago, or some story I’d read somewhere as a kid. I do recall there were many hours of intense boredom waiting for the gig…the universal curse of all performers!"

2112 has been newly-remastered on 200-gram, heavyweight vinyl at legendary Abbey Road Studios using the Direct to Metal Mastering (DMM) audiophile copper plating process, all from original analogue masters. RUSH's fourth album, 2112, first released in 1976, proved a breakthrough, highlighted by its seven-part title suite - written by Lee and Lifeson, with lyrics by Peart - recounting a dystopian story set in the year 2112. It came in at #2 on Rolling Stone's list of 'Your Favorite Prog Rock Albums of All Time.' Most Rush fans consider it the band's definitive recording and it has sold over 3 million albums in the U.S., going triple-platinum.

This unique reissue showcases a custom, limited-edition, hand-etched hologram of the 'Red Star of the Federation' pressed in the album's dead wax runout of side two. To reveal the spinning hologram, fans can use any focused source of light, such as the LED flashlight on a smartphone, directly above the turntable while playing.

Rush frontman Geddy Lee recently sat down with Music Radar and went through a track-by-track overview of the band's critically acclaimed fourth album, 2112, released in 1976. An excerpt is available below:

Lee: “It begins with the 'Overture', which – despite being the first thing you hear – was the last piece to be written, much like with any classical overture. We wanted to take the most important musical threads from each of the subsequent parts to create a ‘new’ piece of music that would represent the album as a whole. So that’s where it all starts.”

“And then 'The Temples Of Syrinx' sets the scene, because 2112 is about a totalitarian society that controls everything about your life, including the music that you hear. It manufactures it all, so that’s what we wanted to say with this track. It sets up the hierarchy in this futuristic world that we’ve arrived in.”

“'Discovery' is where the hero of the story finds a device in a cave. It’s a guitar, but he doesn’t know it because they don’t exist in his time period. So he picks it up and realises that it’s a device that can make music and create sounds. Previous to that point, everything he’d ever heard had been provided to him by the people that run his world.”