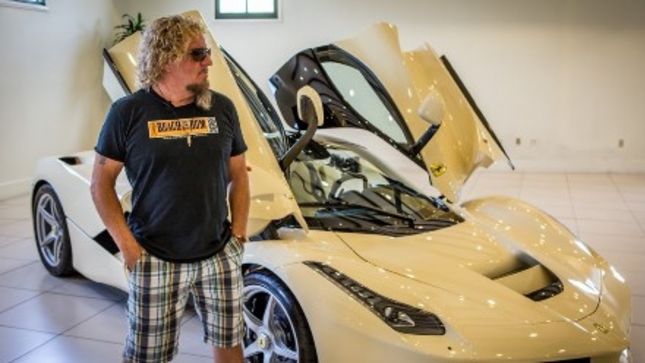 Josh Max at Forbes recently caught up with red rocker Sammy Hagar to discuss the singer's $1.3 million dollar LaFerrari and the hoops he had to jump through to finally get it home. Following is an excerpt from the interview.

Forbes: "A lot of guys, they become the top of the rock star world and they just buy the car. The heart is not there. It’s like a guitar. I can tell it means something to you.

Hagar: "It does. It has nothing to do with status. It has nothing to do with ego. I have got mine. I’m not like 'Hey everybody, look what I got!'  And when I am driving it, I am actually a little embarrassed because everybody is coming up to you and looking at you and then the stupid cars come up next to you and want to take a picture. The guy’s trying to drive and take my picture. I go 'Get away from me!' I drive it pretty hard because it pretty much will do anything you can think of. It’s an amazing handling car, so far beyond my abilities that I feel like I can drive it really, much harder than I can drive my Daytona or even my 512 Boxer because their abilities aren’t the same, you know? I could lose one of those cars. But this car, I wouldn’t ever drive it to its full potential because of the possibility of wrecking it. I would be crying. It’s not the kind of car you would take down to the local body shop and say hey, fix this thing, you know? I am sure it would have to go back to Italy and I probably wouldn’t see it for another year."

Hagar recently delivered a $100,000 cheque to the hospital, and he spoke to The Pulse Of Radio about the charity effeort:

"This lady is building immune systems through diet and through vitamin therapy and stuff that are extending their lives. Because these children have strong immune systems if she could just get it back going again. And she's squeezing 10, 12, 14 years out of some children and so I'm supporting her. And how I'm supporting her is I get her $100,000 a year for two assistants so that she could spend more time in the lab and less time doing interviews and filling out paperwork. Just to put money into cancer research there's so much money going into cancer research and it's a tough one. This lady I think has got a handle on something and I want to give her a good shot at it."

Acoustic-4-A-Cure was created by Hagar and Hetfield, whose vision was to raise needed funds and awareness for the Pediatric Cancer Program at UCSF by bringing together some of their legendary friends and throwing a must-see concert for fans. In past years, artists including: Billie Joe Armstrong, Jerry Cantrell, Pat Monahan, Linda Perry, Chad Smith, Adam Sandler, Joe Satriani, Nancy Wilson, and more have joined Hagar and Hetfield to rock the sold-out benefit concerts.