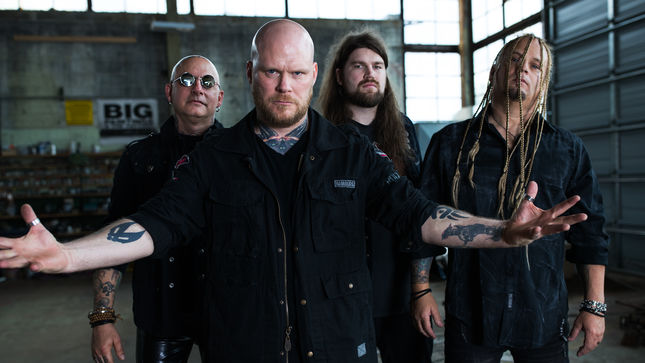 Sault originally formed in 2014 as a solo project of acclaimed bassist Sean Tibbetts, who sought to write hookier metallic rock music while not in the studio or touring with his full-time band Kamelot. After deciding to branch the project out to a full band, Tibbetts joined forces with solo guitarist/tattooist Curtis Jay, and – after an introduction via One Eyed Doll and Sault guest vocalist Kimberly Freeman – linked up with singer Benjamin Riggs of groove metal group Arcanium. Seeds of Power features the talents of two rotating drummers – Matt Thompson (King Diamond) and Casey Grillo (Kamelot).

Sault are kicking things off with the release of their brand new, high-energy music video for the catchy heavy rock track “Adonai” – and song that is sure to get stuck in your head! The video for “Adonai” was filmed by Bad Trip Films and produced by Roy Warner in Detroit, MI. Watch the video and get your first taste below:

Sean Tibbetts says: “‘Adonai’ is one of my favorite songs to play. It is just flat out raw fun. The song is about a hero running from and eventually doing battle with an ancient creature. While fighting he screams out to his god for strength, ‘Adonai’. I say creature because I didn't want to use the 'D' word... dragon. There it is I said it. I didn't want it to be a Dungeons & Dragons song, so we'll go with creature.”

Tibbetts offers insider’s information about the video: “When we set out to do the video, we all agreed to go with a performance video but with the lighting similar to the video game Goldfinger. I think Roy and his crew did a great job accomplishing the texture and lighting we were going for in the scenes. Viewers should note - Casey Grillo played drums on the track but couldn't make the video shoot so we asked our friend Chris Burrows to fill in on the drums. He did a great job. No surprise, since he is an amazing drummer!”

Seeds of Power was recorded using the power of the internet, with different members recording their parts in Florida, Kentucky, Colorado and Texas. The album was then produced, mixed and mastered by Oliver Palotai (Kamelot, Uli Jon Roth, Doro) in Stuttgart, Germany. Vocal tracking is credited to Adam Stewart of Arcanium and additional vocal edits were made by Jason Sewell of One Eyed Doll. Contributing writers on the album include Kole Kruger, Vic DeLeon, Jeff Garner.