SCORPIONS Guitarist RUDOLF SCHENKER - "We Are Not Doing An Album At The Moment; It's A Question Of Inspiration" 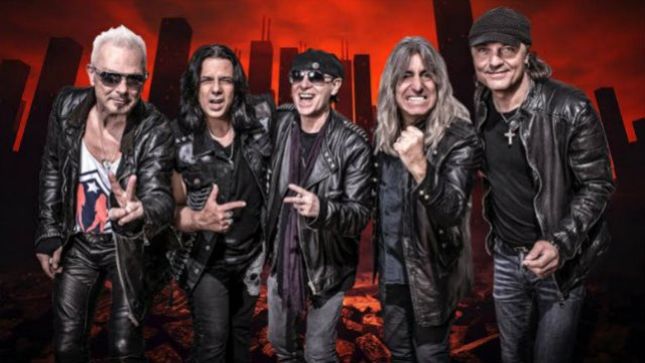 In August 2018, Scorpions guitarist Rudolf Schenker stated during an interview with Digital Journal that the band was open to the idea of recording a follow-up to their 2015 album, Return To Forever.

Schenker: "We are still waiting for a moment for inspiration to do another album, like Judas Priest and Metallica did. You have to wait until the time is right."

Judging by what frontman Klaus Meine said during a recent interview with Scorpions Brazil, that time could be now.

Meine: "When we left the last show earlier this year in Cyprus (in February), we said, at some point, before we go back on the road, it would be nice to go back into the studio and maybe start writing a couple of new songs. When Rudolf came back from Thailand and we all came back together, just a couple of weeks ago, actually, we went straight into the studio, and it was fantastic. We had such a good time, and there were plenty of ideas. It was a really good vibe to work without big pressure or anything; just come back together, write a couple of songs, enjoy some time in the studio.

If somebody would ask me the question, 'Is there a chance for a new album?', the chance is much bigger now than it was just a couple of weeks ago. But, we will be back on the road soon, and I guess we don't have a chance to go back working on new songs really before the end of the year or early next year. But there's a good feeling in the Scorpions camp there might be a new album out in 2020."

Schenker recently spoke with Scorpions News (interview below) confirming that he has been in the studio working on new material, but the band hasn't commited to the idea of making a new album.

Schenker: "It's a question of inspiration. We are not doing an album at the moment. We are looking where we have inspiration and whether we are ready for an album. It has to be inspired, the album… we wait for the right moment. Now we have Mikkey Dee on drums, which is a new kind of element, a new chemistry, which gives us a lot of possibilities of creating something special, but you have to feel… It's like cooking a soup. You cannot eat a soup now directly... no. You have to wait until the taste is good, until the spice is good and until the temperature is good. And when the soup is too hot, it's even sometimes very good, because then you have to eat it slowly. This is the way how to create music; not going and playing something. You have to get goosebumps to your own music."