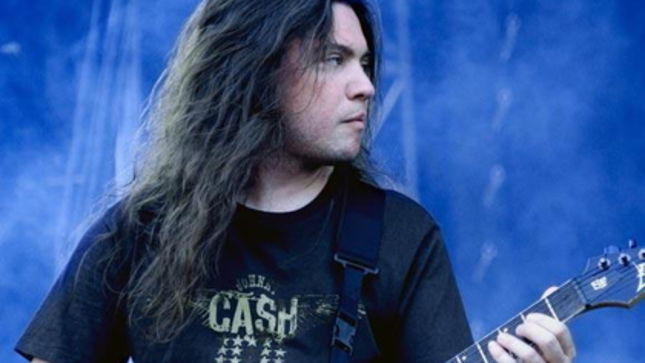 Former Megadeth drummer, Shawn Drover, has checked in with the following update on his new band with Megadeth bandmate, guitarist Chris Broderick, and ex-Scar The Martyr vocalist Henry Derek Bonner:

"I am leaving on Saturday for Hartford, CT, to begin drum tracks on the new record I am doing with Chris Broderick, Henry Derek and our new bass player, Matt Bachand (Shadows Fall). I have known Matt for 15 years now and he is a great musician, songwriter, singer and all around GREAT person. To say I’m jacked up about having Matt with us is an understatement!

All the songs have shaped up nicely and there is a lot of metal dynamics on these songs, overall. Some of them are flat out thrash-speed metal, others are up tempo, but I can assure you it is all 100% HEAVY METAL. Those who know me know I have always been an advocate for the more aggressive metal stuff, so if you’re expecting anything to the contrary on this record, you would be dead wrong.

Anyways, Matt Bachand will be in the studio with me, as he lives not too far from the studio, as does the Producer/Engineer who will be recording drum tracks with me. As I write this I cannot reveal WHO he is yet, nor the record company we are signing with, etc. That’s for the press release, which you will all see very soon. Believe me, this dude is a full on METAL PRODUCER/ENGINEER (I would never have anybody but that to do this kind of music).

That’s about all for the moment, ALOT more information is coming your way real soon."