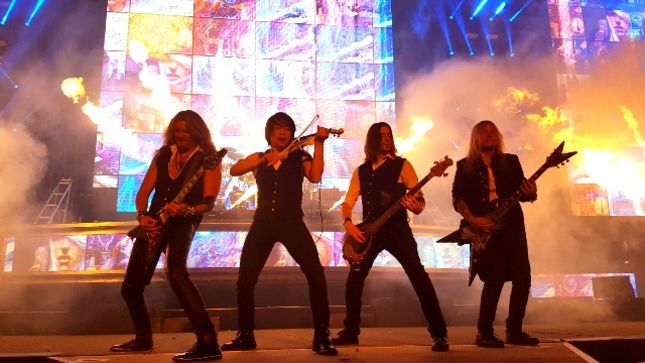 Dan Roth recently spoke with bassist for Tran-Siberian Orchestra and Soto, Tony Dickinson. In addition to chatting about his musical background and his work at the forefront of the video game music scene with The Tiberian Sons, Tony talks a great deal about his time so far with TSO.  He also discusses his relationship with, and taking over for the late David Z on the TSO tour.

DR:  Besides being a great bass player, Dave Z was such an outgoing and lovable personality on stage and was a real fan favorite.

TD:  "Dave and I were only ever in the same room together at the rehearsals, but he and I emailed back and forth a lot as we nerded out about bass stuff (laughs). Even though I had physically only been around him for a total of six weeks over the years, Dave always made you feel like you knew him really well.  He was so friendly and welcoming, so I felt like I knew him probably better than I realistically did. Dave was a music nerd, too. He and I would have music theory and ear training contests. Personality-wise, Dave and I are pretty different. I am not nearly as outgoing as Dave was, but then again very few people are (laughs).  Musically, Dave and I were really pretty similar. We were both into Dream Theater, Dirty Loops, Michael Jackson, and the like. Our playing styles ended up being pretty similar. It was a natural fit for both TSO and Soto because he played a lot of fills the same way that I would've approached them. So, with both bands, I play Dave's fills and that is my way of keeping him going."

DR:  Any apprehension stepping into that role after what happened?

TD: "That is the really the hardest thing when I stepped into the role in 2017. I knew the legacy that he had left and the affect that he had on people. Nobody wants to follow someone like that, but the show has to go on. It really is about finding the balance of what came before you and trying to still remain your own person. I was really worried about how the band and the fans would feel. The band was really welcoming and were happy to have me, and the fans were amazing. I am so happy that the fans accepted me so warmly."

The complete interview is available here.

On July 14th, 2017, Adrenaline Mob bassist David "Z" Zablidowsky and tour manager Janet "Jane Train" Rains were fatally injured when the band's RV was involved in a collision with a tractor trailer on Interstate 75 near Micanopy, FL. Zablidowsky was killed at the scene, Rains was taken off life support a month later. Guitarist Mike Orlando and vocalist Russell Allen - both of whom were seriously injured in the crash - posted tributes to the pair.

Allen, who is also a member of Symphony X and the Trans-Siberian Orchestra, spoke with LiveJournal.com in January 2018 about TSO, Paul O'Neill, the Adrenaline Mob ordeal, and returning to the stage. An excerpt from the interview is available below.

Q: Were you looking forward to this tour more than in the past or was there more trepidation for you?

Russell Allen: "Way more trepidation. I almost didn't come. I was very apprehensive. It was just a lot, it was very hard for me. Losing Dave was really hard on all of us, especially...I was there, you know. And having to go through all that this summer was really rough. Rough on me and my family and having to come here and see...and go through all that again, you know, but even more so. Seeing people who he was with for 17 years, you know. I had known Dave for a long time 'cause he actually, him and his brother Paulie, opened up for Symphony X years and years and years ago. I had known David...there's a picture of me and him, my God, he was just a kid, like right when he got into TSO so he had the short hair. I was young too, God, I was so young back then...but anyway, I was really nervous about coming here and you know, I didn't think, I didn't know if I was gonna come back. But my therapist and my doctors were saying, 'This is a good thing for you. You need to go and do this and confront this and go out on this tour and stuff.' 'Cause you know, just getting on the bus was a bit of a deal, an ordeal for me, man. I was just scared man, I was just....the first night, couple of nights on this thing, I just couldn't sleep. And the pyro was a big trigger for me and having to go through a lot of that stuff, you know, it was all baby steps and I got through it. Everybody here is just so awesome and so lovely and nice and I realized that I was surrounded by a lot of love and stuff, but it was hard. I'm so glad that I did it. I'm glad that I'm here. I'm happy that I'm here to, to be here for everyone else too. To carry on Paul's legacy and Dave's as well, so I did the right thing. I'm happy that I came here, but it was tough leaving my kids and my wife and stuff after almost losing everything, you know, just my life, so it's been, it's been a journey the past 6 months to say the least."

Q: Yeah, I can't imagine. So many people who knew Dave and were concerned after the accident, were so encouraged seeing and hearing you at the Rubix Kube show in tribute to Dave, doing "Don't Stop Believin'." How important was that night for you?

Russell Allen: "It was monumental, you know, to be there for Paulie and the family was important and I was so, we were all so heartbroken and I just wanted to be there to show my love and support for Dave and for all the Rubix Kube guys. Getting up there and singing that song, I just poured it all out, you know. And it was the beginning of the healing process for me that night, so that show meant a lot to me to get out there and be a part of that."

Q: The year's show is obviously a tribute to both Dave and Paul. How does that manifest itself for you? Are there some special moments that are particularly poignant?

Russell Allen: "Well, when Kayla sings the tribute to Paul, that's the, THE moment in the show, you know. In "This Christmas Day," Dave's bass, his Spector bass is leaning against the Christmas tree in one of the screens and in Omaha that really got me and stuff. Everybody came out while I was singing and I didn't know it was up there. And I was like, 'What are you guys all looking at?' I'm like, 'I know you're not all out here to watch me.' (laughs). They told me what was going on and that was very emotional. So I have moments, you know what I mean; they come and go and I just, I realize the gravity of the situation and I'm aware of it, but I don't let it overcome me because I gotta get through the performance so I lean heavily on my entertaining skills to get me through all that stuff and everything. But God, I mean we all miss him so much and it's just a reminder of just how short life is and I just take that energy and instead of being sad about it I just rejoice in the fact that I'm still here, we're still here, and we were given this great gift from Paul and Dave's energy that he put into the show every night. And I just wanna make sure I'm honoring those two as best as I can every night by giving everything I have. And that's what I think about. So if I'm out there scatting a little more or singing a little more, that's just because it's coming from a deep place and I just want to make those guys look down on me and the rest of us and be proud and say, you know what, they wouldn't want us sad, they would want us out there kicking ass and killing it every night so, so that's what, that's what my mission is out here. My mission is to honor those, our fallen brothers, and give as much as I can every single night to you guys, to the fans. And so, that's really what it's all about, you know. Life is too short and it should be celebrated. And I think celebrating their lives on this tour has been a great experience for all of us and a reminder of just how fragile it is. And I'm in a different place, I mean I think we all are. So I don't take anything for granted. I really, I really am grateful for the opportunity to even be here at all so you know, that's how I approach it."