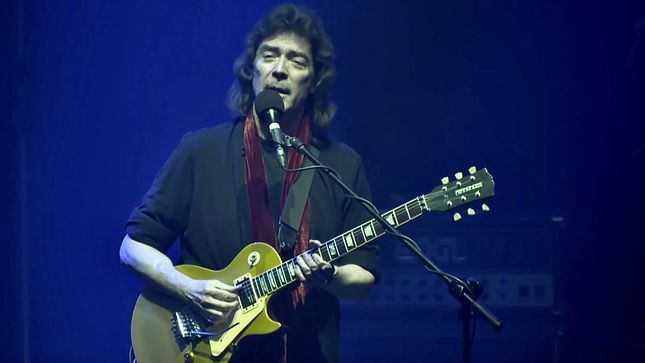 Prog rock guitar legend Steve Hackett (ex-Genesis) recently spoke with Classic Rock for a rundown of his long career. Following is an excerpt from his Soundtrack Of My Life feature.

The best record I've made

Hackett: "I would have to pick my most recent rock album, At The Edge Of Light (2019). Others have told me it’s my best work, and when I play it I don’t have any moments of embarrassment. It doesn’t make me wince, and that’s a nice feeling."

The worst record I've made

Hackett: "In 1981 I made an album called Cured. It had a Linn drum machine on it. It was also the first time I’d sung. I wouldn’t say that it was terrible or embarrassing or even badly executed, and it does have redeeming features that include The Air-Conditioned Nightmare, but in some ways I gave in to commercial pressures with that one. It’s very much of its time. The 1980s were a trying period for album artists that the record companies wanted singles from."

Hackett: "I’ve chosen Jim Hendrix. Jimi wasn’t just a guitarist, it was also the way that he played the instrument and moved with it. I like the fact that he seemed like he and the guitar were one. Jimi was an improviser and he took chances. He didn’t worry about hitting a wrong ’un or fluffing a note. I’m not knocking him for that, he was doing in public what others chose to do in private. That was very laudable."

The greatest album of all time

Hackett: "There’s so much competition, but it has to be Sgt Pepper’s Lonely Hearts Club Band. At the time (1967) it seemed to touch every known musical form – everything from Middle Eastern sounds to marching bands and classical."

Steve Hackett has released Selling England By The Pound & Spectral Mornings: Live At Hammersmith, via InsideOut Music. This live recording is from his critically acclaimed 2019 UK tour. Watch "The Cinema Show" from the release below:

The concert was recorded at the Hammersmith Eventim Apollo, the final night of the tour. Steve Hackett was joined by his touring band of Roger King (keyboards), Jonas Reingold (bass), Rob Townsend (saxes/flutes), Craig Blundell (drums and percussion) with Nad Sylvan on vocals. Special guests for this performance were Steve’s brother John Hackett (flute) and Amanda Lehmann (guitar and vocals).

This was a very special tour for Steve Hackett as it brought together his favourite album from his time as guitarist with Genesis - Selling England By The Pound - which Steve and his band performed live in its entirety for the first time. The show also featured selected tracks from Steve’s personal favourite album from his extensive solo career Spectral Mornings, together with tracks from his acclaimed 2019 release At The Edge Of Light.

Steve comments: “Amalgamating three personal favourite albums, including the whole of Selling England by the Pound, most of Spectral Mornings and At The Edge Of Light highlights was a very special live experience. Both audio and visual on this product give a mind blowing experience of an unforgettable evening at Hammersmith.”

The first set of the concert includes tracks from Spectral Mornings, celebrating its 40th anniversary, and At The Edge Of Light. Steve and the band were joined by Amanda Lehmann on vocals and guitar and by John Hackett, on flute for "The Virgin And The Gypsy" and "The Red Flower Of Tai Chi Blooms Everywhere".

The second part is the live recording of Selling England By The Pound album in its entirety, plus "Déja Vu", a track initiated for the album by Peter Gabriel, but later completed by Steve.The recording concludes with the concert encores of "Dance On A Volcano" and "Los Endos".

"Under The Eye Of The Sun" video: