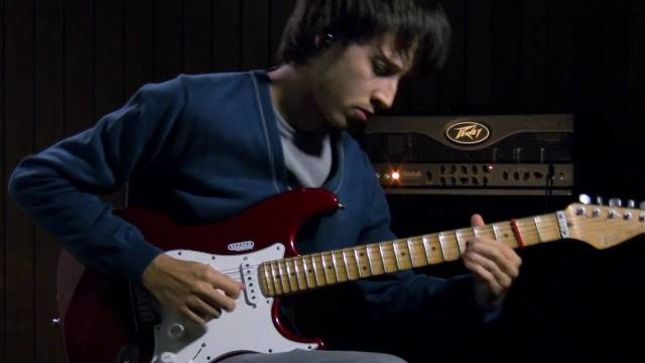 Guitar legend Steve Vai has checked in with an update for his fans:

"I’m asked quite often what young new guitar player on the scene has got my interest and I usually respond, Daniele Gottardo. He really is quite gifted and also a real good guy. He’s one of the few players I see these days that is not only technically dazzling, but his note choices and harmonic atmospheres are rich and deep. This is a fun little video he made but check out some of his other stuff if you get a chance."

Check out Gottardo's work via iTunes here or visit his official Facebook page.

Guitar legend Steve Vai is featured in an interview with The Aquarian discussing his current Passion And Warfare 25th Anniversary Tour and his latest album, Modern Primitive. An excerpt is available below:

Q: Can you describe the experience of touring with the new album, Modern Primitive, along with Passion and Warfare—mixing nostalgia with the new?

Vai: "Well, I’m having a nostalgic time (laughs). It’s really a nice project because my first solo record was Flex-Able. It was bizarre, somewhat of a quirky record where I was basically learning how to record and engineer and write music and get it out. I never really expected to release it, but when I did it I was surprised at how much I enjoyed it—having a record out. I just thought, ‘Hey, I’m just going to do this for the rest of my life!’ I started working on new music with this band I had called The Classified, and then I joined this band Alcatraz… I was offered a solo record deal with Capitol Records, and that’s kind of when I put everything else I was working on the shelf and started writing new music which became Passion and Warfare.

So, when the 25th anniversary for Passion and Warfare came around, I thought this was a good opportunity to go back and finish that music I started in between Flex-Able and Passion and Warfare and that became Modern Primitive. It’s sort of a missing link between the guy that made Flex-Able and the guy that made Passion and Warfare. It was very interesting to go back and listen to that music and complete it because whenever you create something it’s like a little snapshot of who you were at that time. It was kind of charming to peer into the psyche of a 24- or 25-year-old Steve Vai, you know?"

Q: Did you have moments of surprise when you went back to revisit the music where, for example, you didn’t even remember writing parts?

Vai: "Yeah, sure. I had that music in the back of my head all these years because there was something in it that kept beckoning me. That is a really wonderful age for finding your identity, finding your uniquely creative voice, there’s this angst in it, there’s the discovery of freedom and independence at that age. When I was writing and making that music I had no expectations for success, and that is very liberating. It just opens the possibility to just do whatever the heck you want without any fear. That’s kind of what I got when I went back to listen to it was how fearless it was, bold."