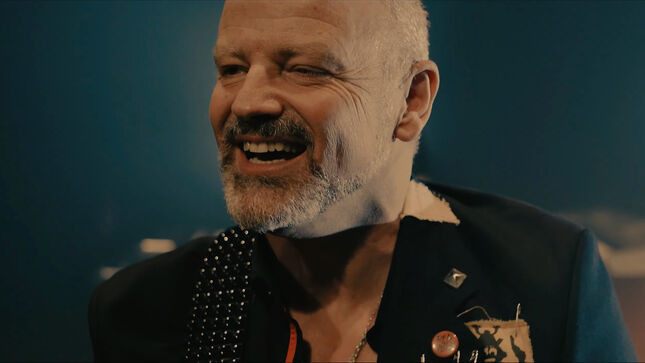 British singer and songwriter, Gary Hughes, recently announced that his new solo album, Waterside, will be released on March 12 via Frontiers Music Srl. Today, he has released the single and video for the title track, which you can below.

Additionally, Ten/Gary Hughes have also announced the release of a double album best of collection, Decades, that encompasses three decades of his solo work in a newly remastered format. This double album offers some of the best Hughes' songs taken from his releases Precious Ones, Veritas, Once and Future King Parts I and II and his self-titled release, Gary Hughes. It also includes some rare tracks which were originally only released in Japan on the “In Your Eyes” EP. Decades is an album full of his influences and experiences and opens the door to the past while looking to his future at the same time.

"It is great to step back into solo mode again for a short while. The songs on my new Waterside album are filled with light and shade. Very much lighter than my heavier and deeper Ten material. We live in such testing times and I have tried to create a piece of Melodic AOR that might lift the spirits and allow for a little much needed escapism. There is definitely a positive feel good factor to this collection of songs and I truly hope the fans enjoy listening to it," enthuses Hughes The aforementioned feel good factor is never so prevalent as in the song and video for the title track 'Waterside'. Hughes explains, "The Waterside video is a very straight forward jacket, jeans and Fender Telecaster affair. A slice of Anglo-Americana. A nod back to the mid '80s and the golden age of laid back melodic rock. We enjoyed making this one immensely!"

Over the course of three decades in music, Gary Hughes has established himself as one of England's premiere Melodic Rock/Hard Rock singers and songwriters. With fourteen Ten studio albums, one rock opera (in two parts), and much more, the body of work that he has amassed during his career is truly impressive. Gary's work with his band Ten offers a hard rock sound which is rooted in the tradition of bands such as UFO, Whitesnake, and Rainbow. Historically, his solo material has offered a more melodic sound which has strong roots in the late 80’s AOR and Melodic Rock scene. The new solo album, Waterside, marks his long awaited return to Melodic Rock. This is also his first new solo album since his“Veritas" release well over a decade ago.

Musically, this is what you would expect from Gary as a follow up to his self-titled solo record and Precious Ones, but also it includes hints of early Ten (the more melodic moments of X and The Name of the Rose, as a reference point).

Assisting Gary in the creation of this new solo album are his Ten bandmates Dann Rosingana (guitars) and Darrel Treece-Birch (drums), with David Rosingana appearing on bass and Karen Fell and Scott Hughes helping on background vocals. If you like British Melodic Rock, then look no further, Waterside is an awesome example of how truly stunning the style can be!