THE WIZARDS OF WINTER Musical Director SCOTT KELLY Talks New Song "Secrets Of The Snow Globe" - "I Had NIGHTWISH In Mind..." 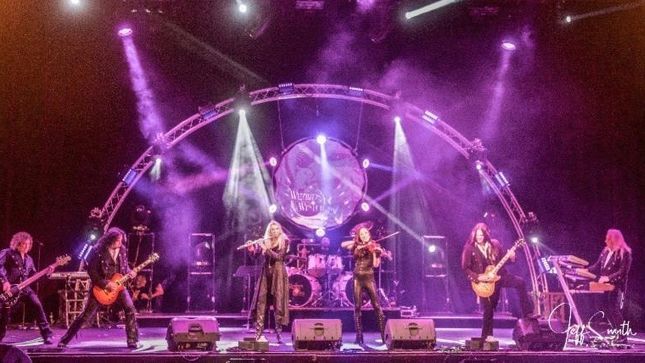 Scott Kelly (keyboards / musical director) and Sharon Kelly (flute / vocals) from holiday rock ensemble The Wizards Of Winter recently spoke in-depth with Dan Roth about the making of their new album, The Christmas Dream, and their 2019 tour. Following is an excerpt from the interview.

Dan: "Secrets Of The Snow Globe", the album opener, though five minutes in length, feels like a mini-epic with a few different movements that make up the song. Can you talk about how that song was constructed and came about? It feels like something that could have become a 12-minute song a la Dream Theater or Yes.

Scott: (Laughs) "It easily could've been. And it almost did."

Sharon: "The vocal intro to 'Secrets Of The Snow Globe' was actually something we were going to use in 'Spirit of Christmas' at one point. We eventually took it out, but always had that in the back of our heads."

Scott: "'Secrets Of The Snow Globe' went through many different iterations over time, and for a while was known as a song called 'Avalanche'. At the time that I was writing it, I wanted to showcase Sharon's phenomenal range. I also had the band Nightwish, whom we love, in mind as we composed the song. Because this is the opener to the show and it is taking you inside the snow globe, we needed that eeriness of the intro. Once inside the globe, she tells the story of what the snow globe is about and that it keeps these secrets inside about Christmas. Then the prog metal piece is the journey as you are flying from place to place inside the snow globe. That was what I was thinking of as I wrote it. It could have gone into many additional directions, which it did for a while (laughs)."

The Christmas Dream contains ten new original songs and is a rocking holiday sleigh ride that crosses musical boundaries from prog metal to contemporary, appealing to a broad and diverse audience. The Christmas Dream is The Wizards Of Winter's strongest release thus far.

The Wizards Of Winter - now in their tenth year - will kick off their annual holiday tour on November 13th. The band's classical and progressive-influenced rock music is woven throughout a theatrical holiday-themed show, performed in an intimate setting.