TOTO Guitarist STEVE LUKATHER - "The Biggest Lie Out There Is That Knowing Anything About Music Theory Takes Your Soul Away; Bullshit!" 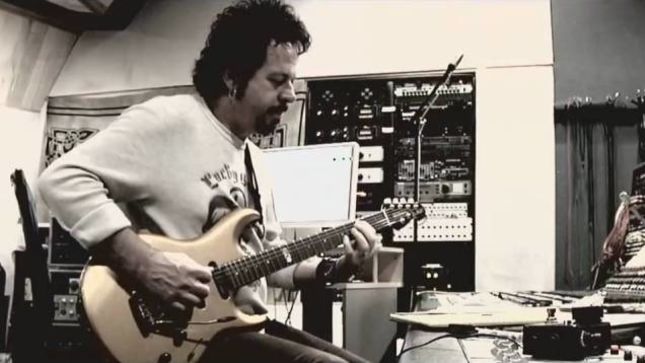 During a conversation with Ultimate Guitar's Justin Beckner, Toto guitarist Steve Lukather talked about tabs, music theory, and more. Following is an excerpt.

Lukather: "The biggest lie out there is that knowing how to read music or knowing anything about music theory takes your soul away; bullshit! On the other hand, would I give, God bless his soul, my brother, Edward Van Halen, guitar lessons? Would I give Jeff Beck guitar lessons? No. My own son plays guitar weird because he didn't want to take lessons. But he started to come upon something that I would have never thought of, so I just stopped myself. And I was like, 'Carry on. Keep doing what you're doing. Just don't become a shredder. There's already too many of them. Write good songs, be a great rhythm guitar player, play melodically, and you'll always have work.'

"So, he listened to me, fortunately, and now it's working. But saying that music theory takes the soul out of a song is just a lazy man's way of saying they don't have the time to put in. It's people who want to go from A to Z and the rest of it doesn't matter - things like playing in time and learning how to tune your instrument properly.

"Learning music theory only helps you communicate with other musicians and it opens up so many more options in your brain, more than just playing in a box. I thought it was the best thing I had ever done. I even learned stuff in my harmony and theory classes in high school that I used to take so I could study music rather than learning regular school shit. It helped me a lot.

Knowledge is power. Learning stuff isn't a bad thing. Your students probably didn't want to do homework - they wanted to learn 'Enter Sandman' and jump off their faux Marshalls."

Metal Master Kingdom spoke Lukather aaabout his new solo album, I Found The Sun Again, and the recent passing of Eddie Van Halen. CHeck out the interview below.