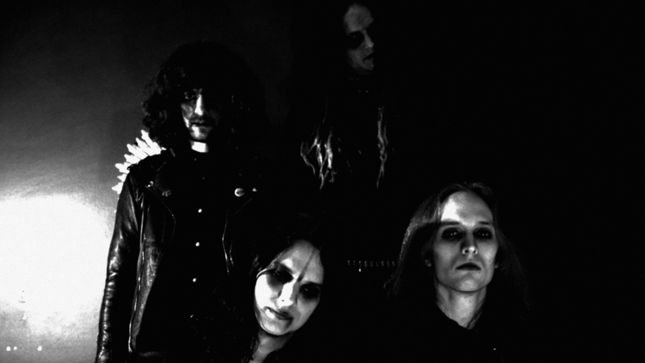 In light of the forthcoming massive North American tour supporting Cannibal Corpse, Behemoth and Aeon as well as to precede the release of their next studio album, Swedish metal band, Tribulation, have announced the release of the “The Death & Rebirth Of…” 7" single.

“The Death & Rebirth Of…” will feature a demo version of the new song “Holy Libations” on side A (to be included in its final form on Tribulation's upcoming studio album) and another new track, “Laudanum Dreams”, on side B. The 7" will be released on black and limited gold vinyl, and marks not only the first release of Tribulation for Century Media Records, but above all is a foretaste of the band’s upcoming third album entitled The Children Of The Night, which will follow-up 2013’s The Formulas Of Death. The album’s release is expected for April.

“The Death & Rebirth Of…” will be released in North America as of the beginning of Tribulation's North American tour starting January 28th, and sold on the road by the band. European fans will be able to purchase the 7" as of February 2nd from CM Distro and other mailorder stores. There won’t be an online pre-sale for this item.

Two of the most prominent bands in the history of death metal are teaming up to take North America in 2015. Cannibal Corpse and Behemoth will join forces beginning on January 28th in New Orleans, LA at the House of Blues.

To open the show, two of Sweden's finest metal acts have been enlisted: Aeon and Tribulation. Premium packages for the tour will be available at this location. The premium packages include: a meet and greet with Cannibal Corpse and Behemoth, an exclusive t-shirt, early entry into the show, an exclusive screen printed poster, and a VIP Laminate.