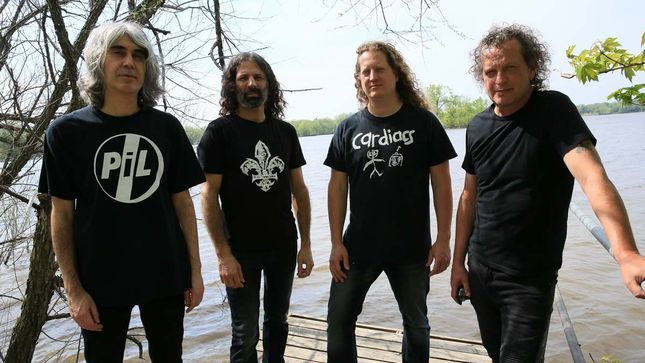 In the latest episode of Metal Pilgrim, Michel "Away" Langevin of the legendary Canadian metal band Voivod speaks about the band's latest release, Lost Machine, and remembers the shows in Quebec and Montreal. Away also opens up about Voivod's new studio album, where the storyline might take us, their 2001 demo album, touring, art and much much more.

Voivod's 1987 album, Killing Technology, began the band's evolution in earnest, with the character from Voivod's album covers - drawn by Away and named as Korgull on 1986's Rrröööaaarrr album - significantly being depicted in a spaceship.

Away: "We've been asked if we would resurrect the Voivod character, and we're thinking about that. It came up a couple of days ago and we're looking into that. And also, I asked (vocalist) Snake what type of lyrical content he was looking at, and he said he doesn't wanna focus on the COVID situation; he says he doesn't really wanna think about the pandemic situation. He's moving onward.

I think that the next step is for everybody to get together at the new studio that Snake is building, and then it's really gonna morph into a real thing. But I think the content of the lyrics side is coming up quick, and we have to figure it out eventually, because sometimes it really ties everything together. What I mean is it's easier to write the album if you know what you're gonna talk about, and which subject comes before which and after which. So that's probably the mission this winter, to try to do a plan."

Voivod have returned with a much overdue live release. Entitled Lost Machine - Live, the album was recorded in Québec City during the worldwide touring cycle for the band’s latest studio album The Wake, and is available today worldwide via Century Media Records.

A new video for the live track “Overreaction” can be seen below. Drummer Michel “Away” Langevin comments: “And last but not least, ‘Overreaction’, the new single/video from our brand new release Lost Machine - Live. This old classic from Killing Technology has been on the setlist since 1987. It really gets the crowd going, and us too! Once again, splendid video direction by Felipe Belalcazar and thanks to Jaan Silmberg for animating my artwork. Enjoy our new live album!!“

Lost Machine - Live consist of 13 tracks across 74 packed minutes of playing time by one of the best live-acts in this day and age. The title can be orderd in its various editions here.