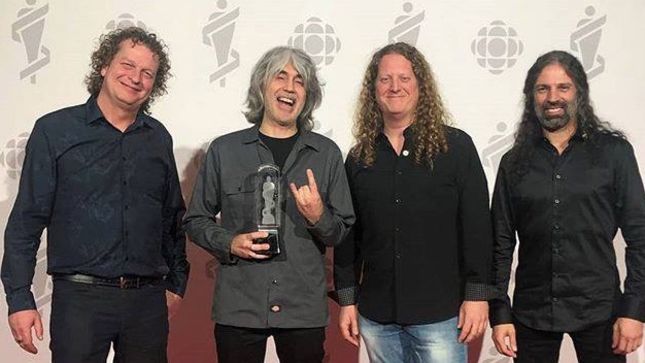 Voivod drummer Michel "Away" Langevin recently spoke with Karen Bliss of Billboard about their long history, winning the 2019 Juno Award for "Metal / Hard Music Album Of The Year", their small-town beginnings and how to stay relevant… or not. An excerpt follows:

What does it mean to you, being recognized by Canada's biggest music awards, voted on by the industry?

"It's a huge tap on the back. Any kind of recognition is great because there is a lot of work put into the album and then the touring. And the feedback from winning the Juno is already amazing. I'm sure we're going to benefit a lot from it. The people from ADISQ in Quebec — sort of the equivalent [association and awards show] — they're now thinking about adding a metal category because they were there [in London, Ontario at The Juno Awards] and super impressed that we won."

Voivod really is in a league all your own, especially in Canada. You could be put in a prog category with Rush and Dream Theater (whose singer is Canadian) but you're all unique. What would you say to young artists that have a vision for a sound that isn't trendy?

"It's a tough one. The first thing you need to do is to find an original sound because trends are going so fast, especially these days, that if you want to follow a trend, by the time you write the songs and record them, then it comes out, you're already a step behind and it's too late. The key is to be original and find your own thing, but then you have to be prepared to evolve in a parallel dimension for a while, like Voivod did."

"We do have our own thing and, now it's paying off big time. We have respect from everybody, but many times, in our career, it played against us - let's say when the grunge years were happening. If you stick to your sound and try to be original, in the end, people will really appreciate you for that, like, let's say, Killing Joke. So that's my advice."