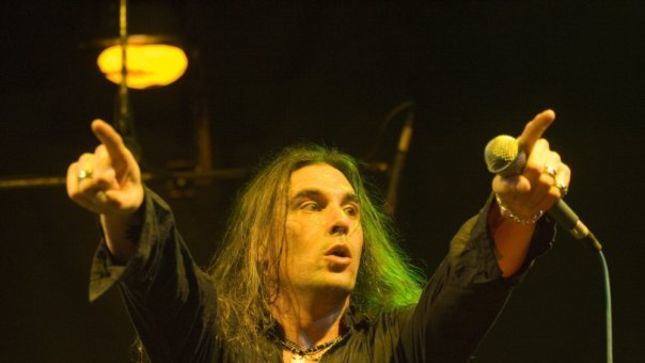 Zisis Petkanas from Rock Overdose caught up with Circle II Circle vocalist Zak Stevens to talk about their new album Reign Of Darkness and the future of Savatage.

Rock Overdose: How’s everything on Camp Savatage? Not too long ago, you were rocking the shit out of Wacken after a way too long break up. What news from the band can you share with us?

Zak Stevens: “Well, we are just kind of talking about what the next phase can be. We are meeting very soon. TSO starts a tour here. The rehearsals start on November 1, so that’s when we’re gonna have our meetings about what we are gonna do next. There’s lots of different things out there. Will it be something like a tour or do we wanna start making an album? We have to talk about all that. Everybody is excited to do a lot of different things. The best thing is that the Wacken show really lit a fire and it got us getting together and discussing what is the order of business. We can do something smart that will get everybody fired up and keep things rolling. Keep the iron hot and get out there and rock. I got my own idea of what exactly I would like to do but I have to share it with the group. But at least we don’t have TSO touring next spring, so that leaves it open for some very good stuff. We’ll let everybody know what we come up with in fall, leading in to next year. There’s a lot of good music, I’ll tell you that much… There’s a lot of good music being written right now.”

Zak Stevens: “Yeah. Jon is writing a lot of material that we don’t know where it’s gonna land exactly, but at least I can tell you that he’s very excited and very inspired right now. He’s very excited about what he is writing. He’s been writing stuff and calling me:“Oh my God, I think I just wrote the best song since “Streets” or “Gutter Ballet””. And I’m like: “Oh, my God”. It’s pretty exciting, what’s going on behind the scenes right now.”

Rock Overdose That’s great! I think this is gonna get the fans really fired up.

Zak Stevens: “Good, cause it’s been too long already. We need to work hard to make sure we light a big fire, because we let the flame go out. Now, it’s gotta be an even bigger one.”

At the 2015 installment of the Wacken Open Air (W:O:A) festival in northern Germany, Trans-Siberian Orchestra (TSO) and Savatage wowed 80,000-plus attendees with a never-before-attempted music festival performance. Following a 40-minute Savatage set and a 40-minute TSO set, TSO and Savatage band members, across two of the festival’s main stages, performed a perfectly coordinated set of fan-favorites. This ambitious feat, both musically and logistically, was helmed by Paul O'Neill. Al Pitrelli led TSO on the “True Metal Stage” and Jon Oliva headed Savatage on the “Black Stage.” Beyond the unprecedented act of two bands hitting the stage at the same time, this show was also memorable as it marked progressive metal originators Savatage’s first show in over a decade, TSO’s first European festival show, as well as the only live appearances of both bands in Europe in 2015.

As the Savatage set came to a close, guitarist Pitrelli raced to the other stage to join TSO for a fierce performance including songs from their upcoming release Letters From The Labyrinth – “Prometheus,” “Toccata/Carpimus Noctem” from the platinum-certified Night Castle and more. For TSO’s first set, the band consisted of John O.Reilly and Jeff Plate (drums), David Z and Middleton (bass), Angus Clark and Caffery (guitars), Mee Eun Kim and Derek Wieland (keyboards), Asha Melvana and Roddy Chong (strings). Vocal duties were handled by Jeff Scott Soto, Kayla Reeves and Andrew Ross, with the group bolstered at times with dancers, background vocalists and more.

At 11 PM came the portion of the performance that left the crowd astonished: all band members took to their respective stages and began an hour-long simultaneous performance playing the same songs concurrently. They stormed through the set containing such songs as Savatage’s “Turns To Me,” a rousing version of “Believe” with a duet featuring Oliva and Robin Borneman along with TSO favorites including “A Last Illusion,” “Requiem,” "Beethoven," and “King Rurick” from TSO’s forthcoming release. A united Trans-Siberian Orchestra featured four guitarists, four keyboard players, two drummers, two bassists, a string section, and multiple vocalists (including the addition of TSO's Russell Allen and Savatage’s Stevens to the above). It was a sight to behold, with several generations on stage: from teenagers taking their first steps on an international rock stage to seasoned veterans who have toured the world.

Throughout the two-plus hours, along with an unprecedented sonic storm, fans were treated to an incredible pyrotechnic display estimated to have cost in the hundreds of thousands of dollars. As anyone on site could attest, it was an unparalleled auditory and visual experience.

Check out some fan-filmed footage below: