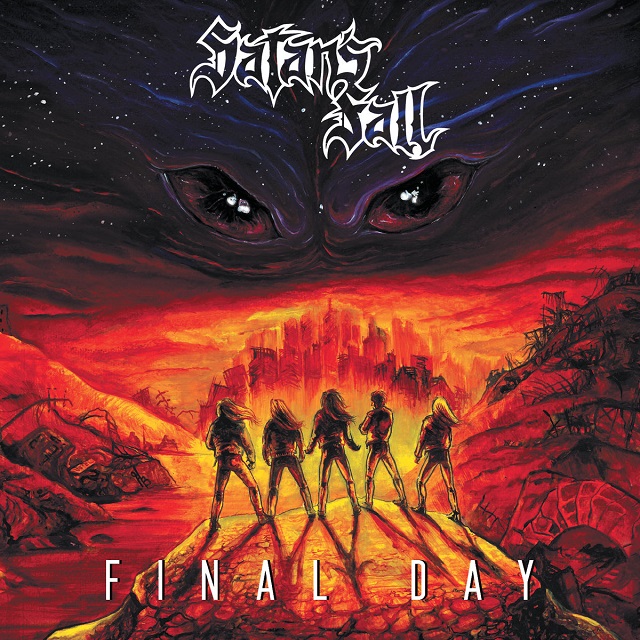 First off, there is nothing deadly or satanic about the proper debut from these young Finns. Over the course of eight hoarse-voiced tracks, lasting 36 minutes, they are best categorized as a mix of traditional and speed metal. Seems the twin axes are constantly blazing away, regardless of musical structure therein. That ain't a bad thing!

Judas Priest ("Hellion"/"Electric Eye") inspired opening, for "Forever Blind", which instantly gets head bobbing furiously. Forceful screaming, more so than singing, is the vocal style of choice. Can't imagine this guy would be able to talk after a live show (unless his pipes were lubricated with a couple of Finnish lonkero drinks), let alone a tour. Bon Scott, struggling with laryngitis! "They Come Alive" sees the band hitting its stride, a singable anthem, with vocal cord shredding lyrics. Staccato riffing "Retribution" sees Satan's Fall downshift to a thumping, mid-tempo grinder, but just as quickly (pun intended) "Juggernaut" reactivates the speed quotient. "There Will Be Blood" possesses an extremely infectious quality, despite the grating vox.

Love the spirited twin guitars in "The Flamekeeper". The restrained, nearly a cappella, start to the titular finale is almost excruciating (think: finger nails on chalk board unsettling), clearly demonstrating Miika Kokko's limitations. Not sure who thought THIS was a good idea. However, once beyond that road bump, the song rocks! Interesting enough to send me back to the otherwise overlooked pre-release compilation of demo material, also issued by High Roller, early in 2020.