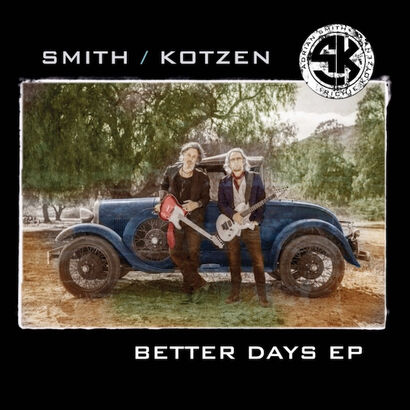 Guitarists Adrian Smith (Iron Maiden) and Richie Kotzen (The Winery Dogs) released their brilliant self-titled debut album in March 2021. Now, the pair has issued a four song EP, especially for Record Store Day. Better Days consists of two new songs – the title track, and “Got A Hold On Me”, both of which were recorded in April 2021 in Los Angeles – as well as two leftovers from the original S/K sessions in Turks & Caicos in 2020, namely “Hate And Love” and “Rise Again”.

First single/video, “Better Days” locks into a solid groove as Adrian and Richie beautifully trade lead vocals back and forth. The mid-song breakdown / solo section is incredibly cool and certainly makes the soulful rock track stand out. “Got A Hold On Me” is overflowing with adrenaline, gearing up and down much like a race car would as it rounds the track to victory.

“Hate And Love” is simultaneously wistful and enveloping; a song you simply need to hear over and over. “Rise Again” thrives upon a bass lick reminiscent of something Billy Sheehan would play, and this energetic number features drummer Mike Portnoy (The Winery Dogs) behind the kit. The verses are more spoken than sung, thereby offering up a welcome contrast with the traditionally delivered chorus.  The shortest of the four songs, “Rise Again” leaves the listener hoping that Smith/Kotzen will indeed do just that. Better Days can be yours on limited edition 12” black vinyl or digitally, unfortunately CDs are not available.