ACCEPT – Screaming For A Wolf Bite 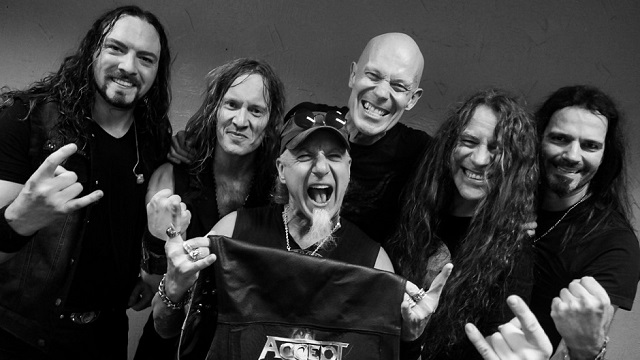 In 2010, German metal legends Accept ended a 14 year hiatus with Blood Of The Nations, an album that went over a storm in spite of the band doing the unthinkable (again) by replacing original vocalist Udo Dirkschneider. News that former T.T. Quick singer Mark Tornillo was fronting the band created a nasty buzz amongst Accept diehards, many of whom regarded the Eat The Heat record from 1989 a monumental bomb due to the addition of David Reece in place of Accept's iconic original singer. Blood Of The Nations was anything but a failure, however, silencing the naysayers with band's strongest record since 1993's Objection Overruled and serving as a launchpad for a decade of metal mayhem. Too Mean To Die is Accept's latest offering five albums in from their comeback, and it's fair to say anyone who has stuck around since then or was weaned on the Restless And Wild, Balls To The Wall and Metal Heart albums will find it delivers the expected goods.

Asked if it registers that a decade has indeed passed since the Blood Of The Nations comeback, guitarist Wolf Hoffmann says "it sounds like a long time, but really, it goes by so quickly. But, sometimes I'm amazed at how much we've done in the last 10 years. Five albums, I made a solo album, we made a live album, we've toured all over the world. Yeah, we've done a lot (laughs)."

One of Accept's last road trips before getting to work on Too Mean To Die was 2019's Symphonic Terror Tour through Europe with the Orchestra Of Death. It was an important tour for several reasons and in truth was meant to be a Wolf Hoffmann solo tour. It simply grew to become an entirely different animal during the planning stages.

"That tour was really a lot of fun" says Hoffmann. "I have to say it's one of the best tours I've ever done in my life from a musical and personal standpoint. It was very satisfying. And the funny thing is, yeah, it was supposed to be a Wolf Hoffmann tour; Accept snuck in as an afterthought. Originally I was going to go on tour with my solo project and an orchestra, but then it happened step-by-step that everyone said 'Well, if you're going to be on stage you're going to play 'Balls To The Wall', right? You're going to play 'Metal Heart', right?' And you can't really do that without a singer, which is how the Accept guys ended up getting involved. It was hard to communicate with the outside saying that it was an Accept show with an orchestra, because I was playing all these instrumentals during the show, but what are you gonna do? I just wanted to play stuff from my solo album (Headbanger's Symphony) and we wanted to play some Accept stuff, so we did a 50-50 thing."

"I thought it would be a good change of pace," he adds, "which is why we had seating at the venues. We thought it would be more of a concert than a metal show where the fans run to the front of the stage and bang their heads. Some people still did that in certain countries at certain venues, but for the most part people just sat down and listened, which was the idea." 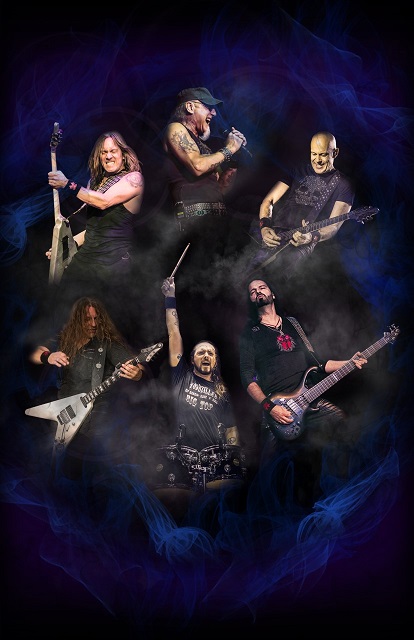 The Symphonic Terror Tour enabled Accept to break in their new bassist, Martin Motnik, the permanent replacement for original four-stringer Peter Baltes. He officially left the band in November 2018, marking the end to his 42 year run with Accept.

"Yeah, and that was also the tour where Uwe (Lulis / guitars) couldn't be a part of it so we used a stand-in, Phil Shouse. And after the tour we figured he's so good, he gives so much and he's a brilliant player, let's just keep him in the band. Who says we can't have three guitar players?"

Baltes' departure came as a shock to Accept fans everywhere, perhaps less so for Hoffmann - the sole remaining original member of Accept - although he admits to being surprised by his long time bandmate simply up and leaving without any real explanation.

"We knew something was up, that something wasn't quite right. I've seen Peter go through many phases in his life in the 40 years that I've known him. Sometimes he was very inspired and a great team player, other times he was withdrawn and quiet; he was certainly that towards the end. He wasn't as involved anymore so it didn't completely surprise us, but it surprised me that he announced it to the world on Facebook and there seemed to be no way back. He'd made up his mind. I wasn't angry, we didn't have a shouting match or anything like that. I was just sad. It was a sad day."

Hoffmann hasn't heard from Baltes since his departure. In fact, the only real sign of life in the aftermath was Baltes teaming up with Dirkschneider and former Accept guitarist Stefan Kaufmann for the "Where The Angels Fly" single, released in September 2020 under the Dirkschneider & The Old Gang moniker.

"It's been quiet," he says. "It's weird, and that's usually the case, which is something I've never understood. Anybody who has left the band, I never have any contact with them afterwards. It's totally strange, isn't it? If somebody leaves the ship it keeps going and they stay behind, and you lose track of people. That's a sad thing." 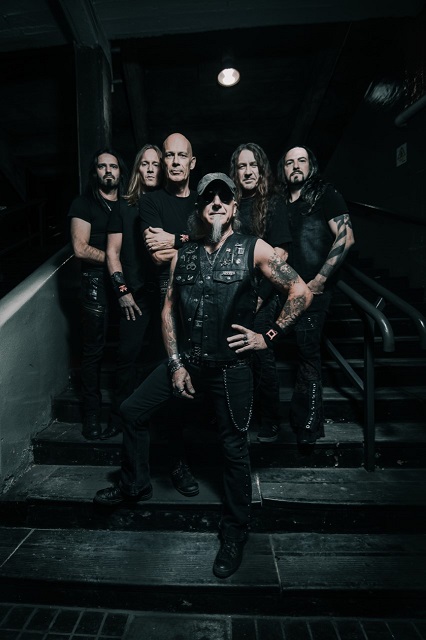 Baltes was Hoffmann's partner-in-crime since 1976, having contributed to writing some of Accept's biggest and beloved hits. Hoffmann admits that the split did affect him going in to write Too Mean To Die, but wallowing in anguish or sorrow wasn't an option.

"It had an effect on me, but at the same time you have to understand that we wrote alone. People think we wrote together, that we would sit there together from the first note of a new song onward. It was never like that. Peter wrote a bunch of stuff at home and brought it to the table, I recorded a bunch of stuff on my own, and then we worked it out together. I couldn't do that with him for the new album, but I still wrote a bunch of stuff, then I just played it to Andy (Sneap / producer) and the other guys. Luckily, our new bass player Martin wrote a bunch of stuff, which was a total surprise. I can't say that he stepped into Peter's shoes but he certainly tried, and he's definitely one of the guys that came forward with a bunch of song ideas. I always encourage everybody to write - especially now that Peter is gone - because I don't want to write everything. As long as it sounds like Accept, I don't care who writes it."

Too Mean To Die marks Accept's first album with three guitarists in the fold, a factor that will be much more noticeable when the band finally hits the road again than it is on the record itself. Having Shouse on board did allow Hoffmann to be more creative when it came to song arrangements, however.

"First and foremost, it does make things bigger and fatter when you play rhythm with three guys, but you can also do stuff from the record live that you normally can't do. Sometimes we have overdubs in the chorus or the pre-chorus that you have to leave out in a live situation when you play with just two guitars, and you can also do twin leads and also have a rhythm guitar. It definitely opens up the whole spectrum a little bit. And when we recorded the new album we thought ahead. Now that we have Phil, I wanted to give him some space so he could play a few leads and trade leads back and forth with me, do some harmonies. I think that opened up the record and made it a little more interesting and multi-faceted."

"If anything, having a third guitarist made my life easier because I didn't have to compose or work out every single solo. Sometimes that's a lot of work when you have to come up with 11 or 12 meaningful songs that you like. That's usually the last step in the recording process. We always worry about the composition and the chorus, vocals and everything, and then it's the guitars solo and the middle section. Sometimes you just sit there and think 'Oh God...' until you come up with something that's good. You can always go the easy route and just solo over the chorus - wham, bam, thank you ma'am - but I always try to come up with something extra when I think it fits. In this case I could let Phil play some of that stuff. It was nice."

That said, the first single off Too Mean To Die is a trademark Accept tune that, realistically, doesn't offer up anything out of the ordinary. In fact, when "The Undertaker" was released in late 2020 many fans said it was an odd choice for a lead-off track in that it rumbles along without making a significant impact.

"I'm surprised," Hoffmann admits. "A lot of people have said they thought it's an unusual track for a first single, but all of us in the band thought it was a typical Accept song. Somehow that song is different enough to the point that people took notice. A lot of people have said it surprised them a bit. One of the reasons we released it as the first single is because it was finished first, it was mixed and mastered, so we gave it to the label while we were finishing the record during lockdown."

"What's so strange about it? I still don't get it. I don't know what's so different about it because for me it's about the driving bass in the verses, the singalong part in the pre-chorus. We've done that a lot. I thought it was quite typical for Accept. There's this unspoken expectation that the first single represents the album, but that's almost impossible to do because no matter what song you pick some people will say 'I thought the whole album was gonna be like that.'"

That said, Too Mean To Die as a whole is Accept firing on all cylinders, offering up something for everyone who has followed the band for the past 40 years. Hoffmann is amazed by the positive response.

"I've gotta say I've never done an album where everybody was praising it as much as they do now. It's crazy. I do dozens and dozens of interviews, I talk to a lot of people, and not one person has given me any grief about anything on the new record. People really love it a lot. When we're writing songs we sometimes have the criteria of 'Would we have liked this album back then?' We go for cover artwork and song ideas that we could have done in the early days but never got around to doing them. Basically, Too Mean To Die is a record we could have released 35 years ago."