AMARANTHE - Addicted To That Rush, Baby! 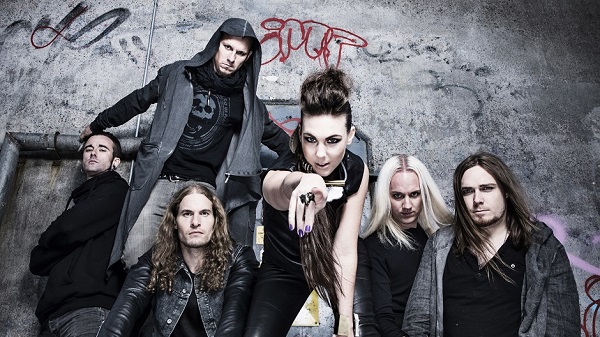 Swedish pop metallers Amaranthe unleashed their third album, Massive Addictive, in October 2014 to critical acclaim, but nobody counted on them still being on the road a year later in support of the record. Not even the band themselves. Multiple headline tours through Europe and North America, as well as the obligatory shows in Japan, have kept Amaranthe's budding career moving forward and they show no sign of slowing down. Almost a year to the day of Massive Addictive's release, band and label teamed up to issue Breaking Point - B-sides 2011-2015, an interim compilation of hard-to-find acoustic versions of some of Amaranthe's best-loved tunes and two full-on metal unreleased tracks; a package meant to tide the fans over until the band coughs up a new studio album. This interview took place in Toronto on what is presumably the final jaunt in support of Massive Addictive, and while Breaking Point was the basis for the chat with Olof Mörck (guitars) and Elize Ryd (vocals), the real focus turned out to be on how Amaranthe has come so far since their 2011 debut.

BraveWords: Is Breaking Point in fact meant to appease the fans while Amaranthe is on tour? It's not like they're bound to forget you considering how much you've been in people's faces.

Olof: "We have all these acoustic versions, and we feel really strongly about them, so we had a talk with the label about putting out something different to represent the band. I think it shows a very different side to our musicality. A lot of people are into that sort of thing, but not many people knew these songs existed. Maybe some of them had heard 'Amaranthine' acoustic or 'Hunger' acoustic, so it was really nice to be able to put all of these songs together with the added bonus of two songs recorded for the first album."

BraveWords: In spite of your trademark electro-pop-metal sound, you're used to performing these songs acoustically on the road at radio interview stops or in-store sessions. Breaking Point gives you a foundation to justify a full acoustic tour if you want to go in that direction.

Elize: "We've talked about doing that. Actually, me and Olof are always talking about moving to New York or L.A. because we're the ones in the band that don't have kids. We could do acoustic shows when we're not on an actual tour (laughs)." 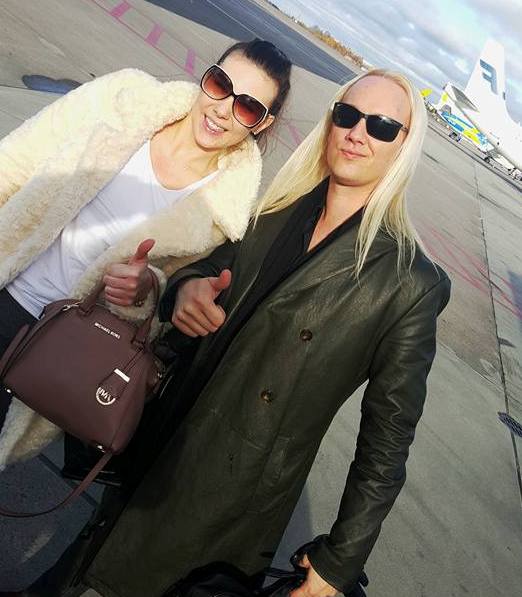 BraveWords: Amaranthe is one of the few bands - if not the only band - that hasn't slowed down in spite of several "baby breaks" for various members. Henrik (Englund / Scarpoint) replaced original growler Andy Solveström, Olle Ekman (Deals Death) stepped in for Henrik last year, and now Chris Adam from Smash Into Pieces is filling in for Jake. We're talking about touring with two of your vocalists sidelined; how have you managed to keep things together and not lose momentum?

Elize: "We've been so lucky because we've known Adam for a long time, and we know Olle well because his band was touring with us in Europe. If they had said no we would have had to pick a random guy, which is a little tricky. It takes away our focus a little bit because, for me, I have to concentrate on my job, and at the same time I feel responsible for what Adam is doing, or what Olle did. That way I can offer some suggestionsor advice after the show for the next one."

Olof: "Amaranthe continues to function because we allow for this sort of thing to happen. I think there are quite a few bands that, if they're faced with that kind of family situation, would say 'No, that can't happen now because we need to tour and you're the singer, you're important to the group.' If you're on the road for 15 years and you never allow anybody to have any breaks, there's no humane side to what you're doing. That's when the real breaks start and band's stop functioning. We're trying to have good lines of communication in this band and let everyone be themselves. So instead of being a problem I think it's extremely healthy."

Elize: "I've actually looked at female vocalists in case I want to have kids someday. I think the best option would be if me and Olof had kids at the same time so it doesn't interfere with touring. We can try and coordinate: 'So, do you think you can have a kid within the next six months..?' (laughs)."

BraveWords: Are you surprised by how long you've been able to stay on the road with Massive Addictive? It could have easily gone the other way, with tour offers drying up six months after release and leaving you with an empty calendar. The album has obviously struck a chord many bands would sell their souls for.

Olof: "What you're describing is what I expected because that's how it is most of the time nowadays. It's interesting that we seem to be moving against the stream somehow in terms of the music business in general. It's obvious that its been having problems for the last 10 years, and I was reading recently that the drummer for In Flames has quit the band, friends of mine Sister Sin have also quit because it's a tough time right now for a lot of people in the business. We started right in the middle of the hardest possible time, I think, and I think it's still possible to make it as long as you believe in your music."

"We've been touring more than anybody else on the entire Swedish metal scene, and I think people can see that we're a real band. We want to make it, we're not hoping for instant success. The first two years weren't only hard, they were hell. It's always fun when you're on stage; it's the business crap that's difficult."

BraveWords: How do you feel about Amaranthe being called "pop metal"? Some people consider that derogatory...

BraveWords: It's safe to say Amaranthe is a guilty pleasure for some of the hardest metal fans out there. There's nothing quite like seeing a long-haired sasquatch-type wearing a Decapitated shirt banging his head and singing along to "Drop Dead Cynical" at the top of his oversized lungs (which happened in Toronto on the night of this interview).

Olof: "(Laughs) People have a lot of opinions about the band. You mention the guilty pleasure aspect of it, but I think that's ironic because while people are complaining that we're doing something different, we're doing really well. Maybe that's not a coincedence, maybe there's something behind that. The reason we're doing well, relatively speaking, is because we're not doing the same old thing. The metal scene today is so absurdly conservative and it wasn't like that when I was growing up 15 or 18 years ago, when I was listening to In Flames in particular. There was a lot of innovation, all the time. Now there is very little innovation because metal is supposed to sound exactly like 'this' ot 'that'. And if you sound different you're a poser and an idiot and you should die."

BraveWords: Any concrete plans for the next album?

Elize: "We're thinking about it all the time. The plan is to start to write after this tour, so we're in the process right now of visualizing how we want the next album to sound. It's definitely time. Some time next year - we don't know when yet - we're going to release the album."

Olof: "At the same time we don't want to confirm anything 100% because things can always be pushed back for some reason."

Olof: "And we'd have something more to talk about (laughs). In fact, Elize did that to me just before we left for the tour. She sent me a mail saying there was something important we absolutely needed to talk about. I was like 'Okay, sure...' and she wrote back 'I'm pregnant.' I was like, 'Whaaaaaaaaaaat?! Really?! Okay. How do we handle this situation?' It took about five minutes before I got a follow-up mail from Elize saying 'Just kidding.' (laughs). Meanwhile my mind was racing, trying to figure out how to plan around that."

Elize: "And I was so excited sitting there thinking I should make him suffer just a little bit longer (laughs)."

BraveWords: And when you're not giving Olof a heart attack you always seem to be on the road. You recently did a string of shows with Kamelot on their European tour, showing up without warning almost immediately after being out with Amaranthe. Where do you get the energy to keep up that sort of pace?

Elize: "That's a question I asked myself, actually. The funny thing is that after this tour, other than trying to create some new songs for Amaranthe, I'm doing 20 Christmas shows in Finland. I'm home for one day, then I fly to Finland and I'm there until December 20th. I just want to be that person. I hate being tired but I hate to say no because we only live once. I also get a lot of energy from doing all the things I'm involved with, so if I were to just sit at home I think I would be depressed. I'd much rather be out there working."