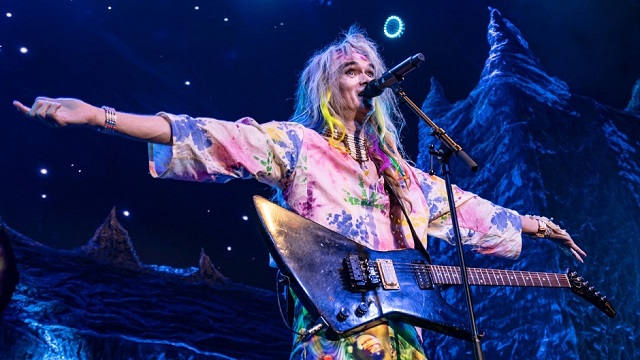 Twenty-two years ago, a struggling Dutch musician by the name of Arjen Anthony Lucassen released what would be his breakthrough album. Buoyed by the attention he received for his first two records - The Final Experiment (1995) and Actual Fantasy (1996) - Lucassen adopted a "go big or go home" strategy and concocted a progressive metal opera featuring the talents of musicians he admired dubbed Into The Electric Castle. It was the beginning of what has become an internationally successful and lucrative career, allowing Lucassen to pursue his musical fantasies and ideas as they formulate in his hyperactive brain. With each album that followed Into The Electric Castle - six more at press time, not including his numerous side projects - the calls for Ayreon to perform live grew louder, and in 2016 fans were treated to a stage performance of The Human Equation album from 2004, The Theater Equation. Lucassen's participation in the production was minimal compared to Ayreon Universe in 2017, the first ever official live Ayreon shows featuring Floor Jansen (Nightwish), Jonas Renske (Katatonia), Anneke van Giersbergen, Hansi Kürsch (Blind Guardian), Damian Wilson (ex-Threshold) and Tommy Karevik (Kamelot) to name a few. Two years later, Lucassen decided to gather his cast of original characters and returned to where it all began with four shows celebrating the 20th Anniversary of Into The Electric Castle. The end result is another jewel in Lucassen's crown, Electric Castle Live And Other Tales.

BraveWords: Over the years you've maintained that Ayreon is not something you could see being performed live because of the scope of the production required and all the moving parts. Between Ayreon Universe and Electric Castle Live - and Star One for that matter - I call bullshit (laughs).

Arjen: "I know (laughs). And the reactions to Electric Castle Live have been unanimously positive. It sounds arrogant, but this time I was pretty sure of it. When we were editing the video and I saw all the material, and I was mixing it, I thought 'Oh my God, we did it.' We had plenty of camera angles to choose from, every shot was cool, the sound was good.... I think this was the first Ayreon release ever where I believed in it 100%. You've known me for years, and I'm always insecure when it comes to releasing a new album: 'Are they going to like it? I wish I had done this...' This time there we no 'if only’s'. For the previous live stuff there were so many of those, but this time everything aligned perfectly. If there has been any negative response it has been towards the encores, which might be a bit too much for some people. And some people don't like the narration, but that's just a personal thing so I don't give a shit about that because John de Lancie was great."

Arjen: "Oh yeah, for sure; it's me and Joost (van den Broek / keyboards). Like what you just said; I always said Ayreon couldn't be done live, and the only reason that I think it can be done live now is because of one person, and that's Joost. Without him I would one-hundred percent not be doing this. I never knew a person existed who could put this all together. I have all the ideas, I make all the decisions because this is my plan, but to make Ayreon a reality on the live stage is so incredibly complicated and he does it." 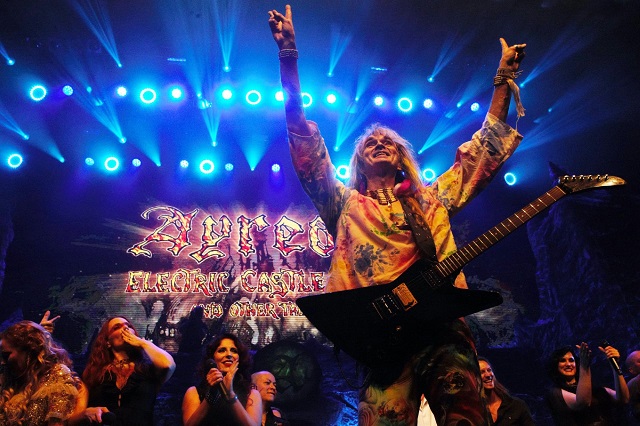 BraveWords: Joost came aboard in 2003 when you did the Space Metal tour for Star One, and he's been involved in your work ever since...

Arjen: "Joost was 19 then, he was a kid. I wanted Robby Valentine but he didn't like playing other people's material, so I called a musician friend and told him I was looking for a keyboard player for Star One. He introduced me to Joost, and I told him the music was complicated. Joost told me he knew the stuff, and he sounded self-assured rather than arrogant when he told me it wouldn't be a problem. From that point onward he's grown better and better, not just as a keyboard player but as a writer and producer. It's quite annoying, actually (laughs). And he wasn't even nervous performing Electric Castle. He had a huge job to do conducting everything, starting the videos and the click tracks, performing, and he did it all with a smile. It's really quite scary."

BraveWords: Is it safe to say that performing Into The Electric Castle in its entirety was a no-brainer after doing Ayreon Universe? As your breakthrough it deserved to be celebrated.

Arjen: "Absolutely. The Final Experiment got some attention, Actual Fantasy sold a bit less, so Into The Electric Castle had to be all or nothing and it turned out to be a success. That was definitely the breakthrough. The sad thing is that at the time of Electric Castle we didn't have the phone cameras and all this digital shit yet, so nothing was documented. Now I film everything. I only have a few photos from the time I was working on Electric Castle and that's it, so yeah, 22 years later the memory of working on it has kind of faded. So, I think the live production is something of an upgrade. It's true to the original but we made some changes here and there that we thought would make it more interesting." 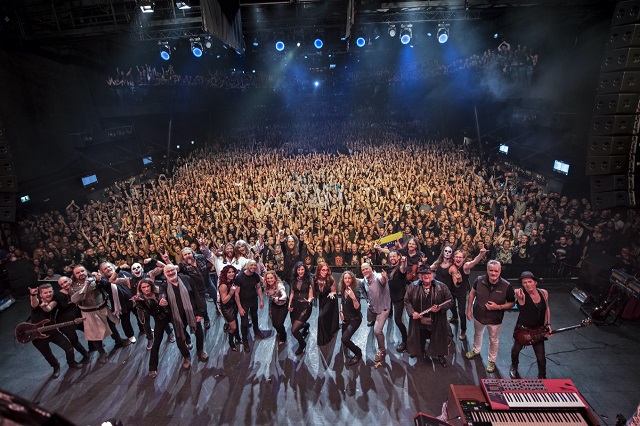 BraveWords: You managed to get almost all of the original Electric Castle cast to reprise their roles for the live shows. Was that easy to do, or was it a nightmare with a happy ending?

Arjen: "It was the easiest experience ever, because putting the line-up together for Universe was hell. I contacted all the original musicians and almost everyone said 'Yes, of course.' The lucky thing there is that a lot of them are Dutch, and they're not in super-famous bands so they had some time. The only one who I thought might be a problem is Fish (ex-Marillion) because he's doing a lot of live stuff, and he didn't have time to do Ayreon Universe. But, he was in immediately which was great because he's such an important part of the original album."

"That's the good thing about Ayreon; people take it seriously. When they hear that I've worked with Bruce Dickinson or Fish, they take a listen to what Ayreon is all about because those people aren't going to sing on crap. They have a standard, so I think that made a difference in the end when Into The Electric Castle first came out." 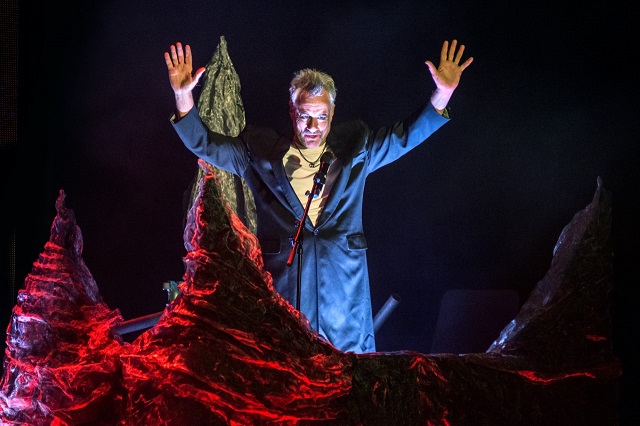 BraveWords: Getting Star Trek's John de Lancie to do the live narration... where do you get the idea "Sure, I'll just get Q to do it for me...?” That's a ballsy move.

Arjen: "(Laughs) I was going to ask the narrator for Into The Electric Castle, Peter Daltrey, but he's a grandpa now and wants to be with his family so I didn't bother. So when I was thinking about the narrator of Electric Castle, who is an omnipotent being toying with mankind... let me think (laughs). That's Q, totally, and I started to wonder if I had based that character on Q when I made the album. I approached John de Lancie through an old email address, and I got an answer from him saying he would run it by his manager, who said no, they weren't going to do some hard rock / metal opera. But, John's wife - who was also on Star Trek - is a musician so they checked Ayreon out together and they loved it. John said to his manager, 'Hey, this is my rock opera. I'm 70. How many more chances will I have to do this?"

"The next thing was Skyping with John, and that was scary. I grew up on The Next Generation; every week I was waiting for it and Q was my hero. And there I was Skyping with one of my idols. It was very scary, but he's such a nice guy that after a few minutes I was okay. He was so interested and wanted to know everything, and he wanted to write all his own narration. And he did. He worked on it for half a year and it was just incredible. It was a very emotional thing for me to meet John and to work with him."

BraveWords: Ayreon is known for the emphasis on physical product for the diehard fans, putting out box sets and limited edition formats stuffed with bonus material. With the state of the present day music industry, how has it affected your ability or motivation to spend the time and money on creating these special packages?

Arjen: "Not at all. Not for me. I'm just lucky because I come from a time when people, the fans, had to buy physical product. I think it was when I released The Human Equation that people started downloading music. I remember doing an acoustic show for the album before it was released and people knew the songs, which freaked me out (laughs). That was my first experience with downloading. All the albums before that, people still had to buy them, and through the years I've built up a loyal fanbase so even if they're never going to listen to the physical product they still buy it. Luckily, the record company understands this and they're with me on trying to make these amazing packages. So, there's the great artwork, behind-the-scenes documentaries, 5.1 mix, the coloured vinyl LPs, beautiful box sets, and these things sell like crazy. I have such an incredibly loyal fanbase, which is pretty clear when we had 12,000 people come from 64 countries to the live shows. The label has faith in it but they know they're making money off it, too. They know they'll make their money back." 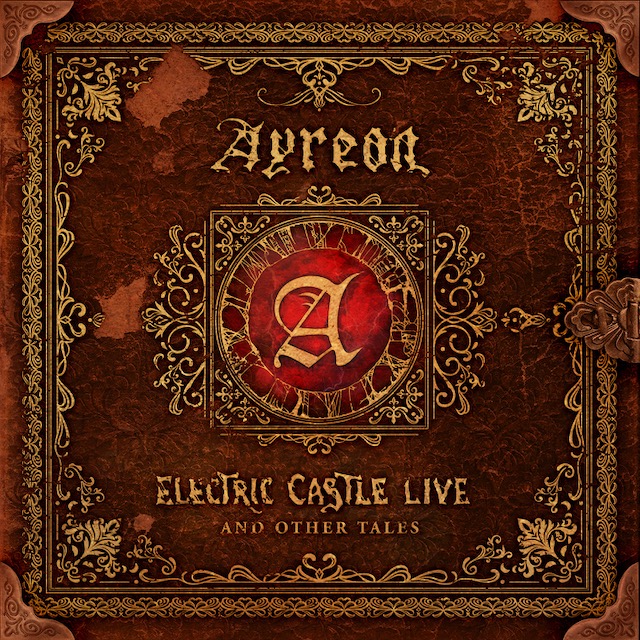 BraveWords: What's next for you? I figure you're giving Ayreon a rest for a while, so is there another project in the works?

Arjen: "I've been working on a new project for three years. It doesn't usually take that long but I had all the live stuff going on in that time as well, so between the shows and then editing and mixing the DVDs, it takes a lot of time. And, as usual, this project just got bigger and bigger as it went along (laughs). I realized earlier this year that I'm done, that I should stop working on it. I asked the record company if we could release it this year, so we're doing everything we can to make that happen, but it's not a sure thing because of how this Coronavirus has affected the industry. I'm hoping for a release in September."

BraveWords: We were quite literally about to go to press with this story when you announced via social media that the new album will in fact be a new Ayreon record. What made you decided to put the Ayreon stamp on it (album title: Transitus) rather than go by a different name?

Arjen: "Indeed, it wasn’t set up to be an Ayreon. The original plan was a movie script and a comic book, but I have this 'circle of trust' who are mostly non-musician friends, and I sent them the material. Most said that indeed it’s quite different from previous Ayreon albums, but that it definitely deserves the Ayreon stamp. Since I don’t want to wait years for a possible movie to be made - it’s really hard to get funding, movies cost millions - I decided in consultation with the record company to call it Ayreon after all. After all it has all the trademarks; many singers, a story, many different musical styles and...totally over the top (laughs)."