DORO – Hail To The Queen

On June 24th, German metal queen Doro released her latest in a string of anniversary DVDs entitled Strong And Proud - 30 Years Of Rock And Metal. For some people this may come off as overkill in that the lovely lady cranks out an audio-visual extravaganza every five years or so, needlessly showcasing the fact she’s still in top form and kicking ass. For the diehard fans it’s a celebration of an artist who continues to put her peers and performers half her age to shame (Doro was born in ’64; do the math). Strong And Proud is a monstrous three DVD set featuring an obligatory Wacken Open Air show, a two-night stand her Düsseldorf home town divided between Classic Night and Rock / Metal Night sets, a behind-the-scenes documentary, and bonus material Doro couldn’t leave on the cutting room floor even though she was advised to do so by the creative team backing her up.

“It was at least one-and-a-half years of work,” Doro reveals, as the 30th Anniversary show in Düsseldorf was shot in 2014. “I have a guy that works with me, he’s done the last four DVDs, but I always want to be there to help take care of stuff so it’s definitely teamwork. I know best what the fans want to see, so there might be an editor that’s great at his job technically but I want to see excitement of the fans, I want to see their faces. Those things catch my eye but the guy doing the editing might have a different perspective. And sometimes I’ll have to tell the people ‘No, the other guy is playing the guitar solo, not him, so focus on the other guy...’ It’s like they always focus on the wrong guitar player unless I’m there (laughs). There’s a team of people that work on editing, colour grading, sound and all these other details, so it was months and months of work.”

“The guy who did the sound for the DVD, Rudi Kronenberger, is actually a guy who did my demos in the early ‘80s even before Warlock was around,” she adds. “He did a couple of songs on the last record (Raise Your Fist) and we’ve always worked well together. But yeah, it was a team effort and I was totally involved in the making of the DVD.”

If you’ve ever attended a Doro show you know that you get your money’s worth. Her stage time averages two-and-a-half hours each night depending on the venue’s curfew, so it’s no surprise she pushed the envelope even further for the anniversary dates.

“Each night was three-and-a-half hours so I had to let some songs go when we put the package together. My editor said it was too much material, that we couldn’t do a 12 hour DVD (laughs). We talked about making some of the songs that had to be dropped available as downloads but I really wanted to have them as bonus tracks, so we ended up with three DVDs. I love to play my whole history because every album had some highlight songs. And then there are songs like ‘Egypt (The Chains Are On)’, ‘Balls To The Wall’ and ‘Breakin’ The Law’ which were always so inspiring to me.”

“There were some great moments doing those anniversary shows, like when Phil Campbell (Motörhead) came up to do ‘Breakin’ The Law’, because that was just a last second thing. Originally Lemmy was going to join us on stage but he was ill and had to stop the Motörhead set early. It was so damn hot that even if you were in perfect health it was hard to perform that weekend. And there were some spontaneous moments at the Wacken show, like when all the guests from the night came out to sing ‘All We Are’ sat the end. That wasn’t planned at all. Some of them didn’t know the lyrics but it didn’t matter, it was great fun.”

What continues to shock some long time fans is Doro’s tradition of dusting off some of the more obscure Warlock material from the early days – ‘Out Of Control’, ‘Without You’, ‘Save My Soul’, ‘Metal Racer’ – for her sets, some of which made the anniversary show in Düsseldorf.

“Yeah, like the song ‘Evil’ which was only ever available on a 12” package in the ‘80s (with ‘You Hurt My Soul’). I think it’s cool to do that and bring out those really rare songs. I love having hidden treasures like that and being able to give them new life. Some of my fans weren’t even alive when those old songs came out (laughs) so it’s cool to hear them say how much they love them.” 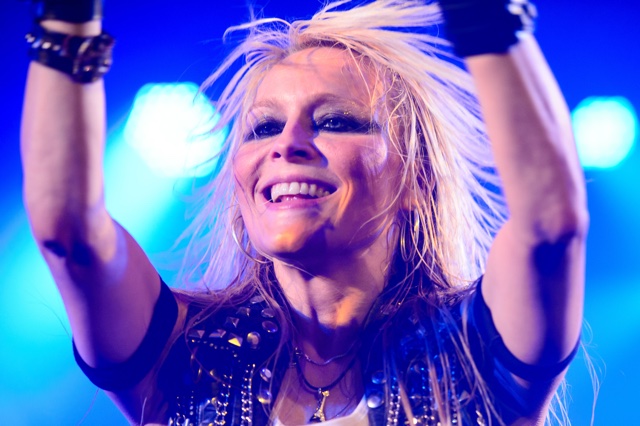 Metal queen she may be, but Doro has played around with and performed full orchestral productions of her songs for years. It makes sense that doing a classical set would require a different mindset compared to a full on rock / metal performance, perhaps somewhat more laid back or reined in?

“It always depends on the song. A song like ‘Love Me In Black’ sounds really nice with an orchestra, but there are some metal songs that I do when I say ‘No, we’ll just leave them for the metal set.’ Every song gets the arrangement it deserves, and some of the definitely call more for a classical arrangement than others. A song like ‘Metal Racer’ I definitely would not want to do with an orchestra.”

Doro continues to tour through a good portion of 2016 but she’s currently working on new music for a 2017 release. One song, ‘Love’s Gone To Hell’, was released earlier this year both as a single and video, unexpectedly premiered live as part of Doro’s Rock Meets Classic set back in April.

“I wanted to get Love’s Gone To Hell’ out now because who knows what’s going to happen next year,” says Doro. “That song had some kind of magic so I wanted to get it out there. We’ve recorded another song called ‘Fight With The Fire’, which reminds me a little bit of ‘Revenge’ from the Raise Your Fist album. I went to Lemmy’s funeral and when I was on the plane I came up with a melody for a song called ‘Living Life To The Fullest’; it’s just a working title for the moment, but it’s for Lemmy. We also have a couple anthems in the making, and I wrote some songs with my dear friend Joey Balin again, who wrote with me for Warlock’s Triumph And Agony album.”

“The new album should be out next year, but we’re always touring so we never go into the studio for six or eight months straight. It’s not like the ‘80s or ‘90s because touring has become so important to survive in this business, so there isn’t a definite release date planned just yet. ” 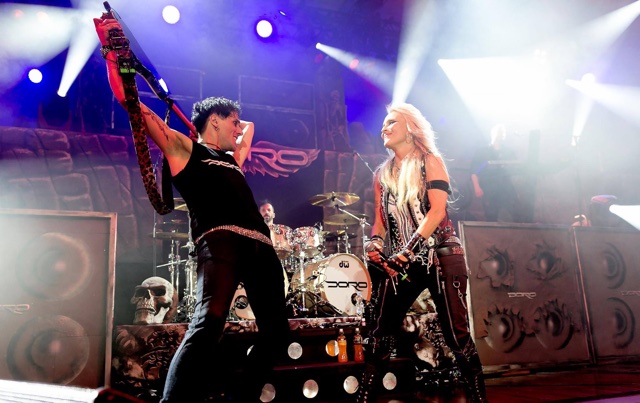 Technically, Strong And Proud is in fact two years late, as the celebration took place in 2014 to celebrate the 30th Anniversary of Doro’s 1984 debut with Warlock, Burning The Witches. One fan that was on time to the party is former Sodom guitarist Andy Brings (Double Crush Syndrome), who appears on the DVD as a guest on “Ich Will Alles”. Back in 2014, Brings released a single entitled “Hail To The Queen” dedicated to Doro and her 30 year career. Asked for her thoughts on the song and the sentiment, Doro is rendered momentarily speechless before launching into a play-by-play of how she found out about it.

“I’m so glad you brought that up and I hope Andy reads this story. I love Andy. He’s a great guy, so full of energy, heart and soul, always working so hard. But doing that song for me... oh my God (laughs). I was so blown away that someone would do that for me; it gave me chills. And it was funny because a guy who goes by the nickname Metal Racer asked me if I had some free time one weekend; with my touring schedule there was almost no time so I asked if it had to be on a weekend. Yes it did because it was a surprise for me, so I agreed to the one Saturday I had off. Nobody knew what was going to happen, not even my tour manager, but Metal Racer told me it was something I would like."

"They picked me up in a big limousine with a driver but I had no idea where we were going. It turned out to be a small club, and I had to close my eyes when we went downstairs. There were some of the most diehard fans down there that had travelled from all over; it was a huge surprise. When Andy played ‘Hail To The Queen’, that was the greatest gift I’ve ever received. The song, the video, it was all so amazing. That was definitely one of the greatest days of my life."