EINHERJER – Tales From The Norse West 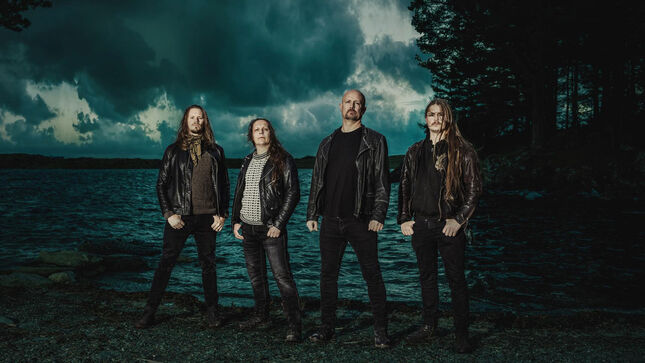 Norwegian Viking metal pioneers Einherjer have a career spanning close to 30 years, boasting nine studio albums, three EPs, history with four record labels, and an odd break-up between 2004 and 2008 when they reformed as the thrash act Battered for one album before putting Einherjer back together. Through all of this their sound has remained constant, with any major discernable changes between the early days and latter years coming from changing production values rather than musical focus. This chat with frontman Frode Glesnes began by addressing the head-scratching Wikipedia entry claiming "some of the band's albums are heavily folk influenced, while others have a more traditional symphonic black metal sound." Everyone knows that Wikipedia descriptions can be painfully inaccurate for the artists in question, but in Einherjer's case Glesnes can only smirk and suggest the person who posted the information mixed them up with another band.

"Honestly, I don't care about the labels we get, but sometime I wonder 'What the fuck are people thinking?'" Glesnes laughs. "Since the start we've had this Viking metal stamp and that's okay because in the beginning it was something fresh and new. We felt it was very fitting for the stuff we were doing at the time, and as time went on other bands began using the Viking metal label as well. Many of those bands were quite different from us because we are basically a heavy metal band; we were the old school and they were the new school. In the later years we haven't actively avoided the term Viking metal, but these days we're just using the term Norse heavy metal. It's what we do, and we add our spice to it. There is a small amount of influence in our sound from Norwegian folk music and Norwegian composers like Edvard Grieg, but we are basically a heavy metal band."

Which may be best proven by "West Coast Groove" being on the new album. Glesnes takes full credit for that curveball, and it's a song that will have diehard Viking metal purists up in arms.

"I'm a huge KISS fan, always have been," he says of how the song came about, "and I really love the cover of 'New York Groove' (from Russ Ballard) that Ace Frehley did on his 1978 solo album. I love that song. I was watching some TV series and in the intro there was this guy driving a car and the music was that song, and it was so fucking cool. For some reason that stuck with me and I came up with 'West Coast Groove' thinking I should use it for something. I was debating with myself over it for a couple of months, like 'Am I even allowed to do this?' (laughs). It's so cheesy but it's also really cool, so I decided we should do 'West Coast Groove' as a tribute to the place we're from (Haugesund, Norway)."

"It's kind of hard to take the song seriously," Glesnes adds, "but then again it's a serious heavy metal song. But really, how serious can we be? And that goes for the whole scene. Regardless of the kind of metal you're playing, the whole metal community has an extraordinarily good sense of humour. I do expect people will enjoy the song." 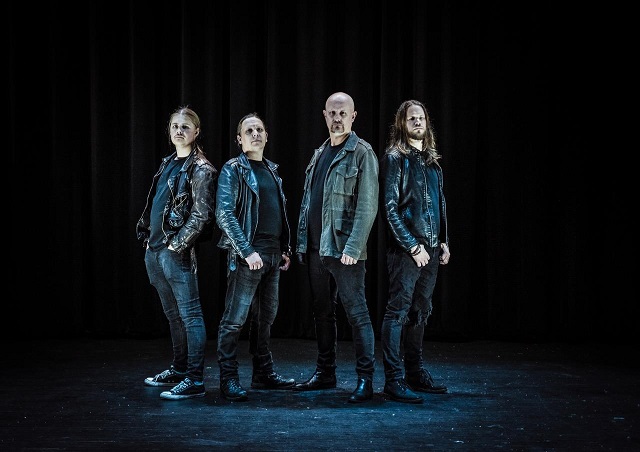 As far as Glesnes is concerned, North Star picks up where predecessor Norrøne Spor from 2018 left off. It all comes down to the simple rule of "If it isn't broken, don't fix it." Which, really, has been Einherjer's philosophy since returning from the hiccup that was Battered.

"In my mind this album and the previous one are more or less the same type of albums. I think we wrote both of them in the same musical frame of mind because when we finished recording the last one, I went directly into writing songs for the next album. It's a natural development and I don't really see where one stops and the next one starts. We didn't really discuss any musical direction for North Star; this is just the natural flow. Maybe some people hear a musical change between the two albums but for us they're very much the same."

"We've always been inspired by '80s metal," he continues, "and on the two previous albums I think we allowed ourselves to let that influence shine through much more than it used to. And that's a fun way of working for us. Me and Gerhard (Storesund / drums, keyboards) write all the songs and we come up with these Easter eggs for each other, putting in very obvious tributes for each other toa certain song or a band that has meant a lot to us over the years. We put them in there, just out in the open for all to see. There was quite a bit of that stuff on the previous two albums. It's good fun for us at least."

North Star benefits from a thunderingly fat and heavy sound; exactly the sort of thing you expect from a band that labelled Viking metal. It turns out this was an in-house production with Glesnes overseeing the entire process.

"I appreciate you saying that because I recorded, produced and mixed the album. I did know where I wanted to go with this album, more or less, because on the recording side of things I've done all of them for Einherjer since 2002. For the last two albums I also did the mix, so I kind of did the whole thing. The last album was the first time I did the whole production from recording to mix. I was experimenting with things, I knew what was missing, so I added that extra fat bottom end and all the stuff that really needed to be there. I also do sound outside of the band, both live and in studio; that's my day job and I've been doing it for many years now. I do know what I'm doing (laughs) and I think it's cool that all the pieces came together for this album. I'm really happy with the way things turned out." 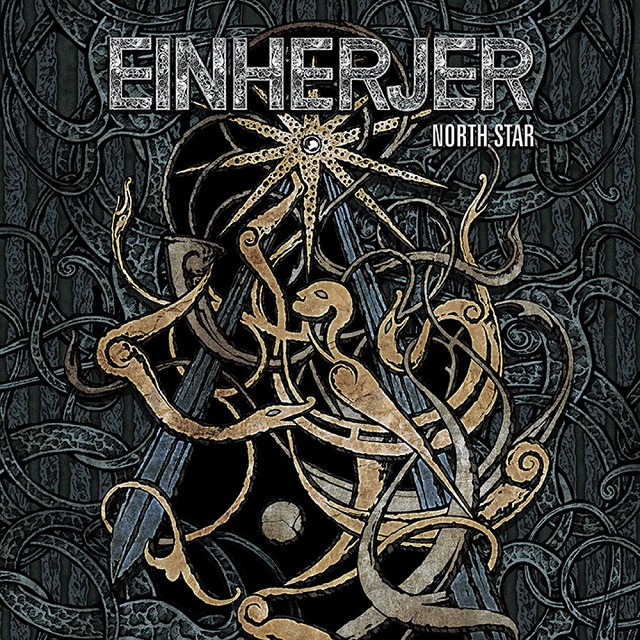 That said, does he ever look back on Einherjer's earlier works and cringe just a little bit?

"Yeah, sure, everyone does that (laughs). I might do that even more on the sound side of things than the musical side, and of course there are things that I wish we had done differently. But then again, it's a part of who we are today. It's a part of our history and development. There is nothing from our past that I couldn't play for other people and would be embarrassed to say 'This is us.'"

Asked to pick his favourite tracks on North Star, Glesnes doesn't hesitate and does not give the stock reply of all the tracks being his babies, thus making it impossible for him to choose between his children.

"We chose the three singles for a reason - the first three songs on the album ("The Blood And The Iron", "Stars" and "West Coast Groove") - and of course I'm very happy with them. Another song that I have a good feeling about is the last one on the album, 'Chasing The Serpent'. It turned out quite different from how I imagined it when I was writing it. We write all of the music first, record it all, and when I'm closing in on the mixing, that's when I start recording the vocals. At that point everything has its place and there is some sort of soundscape that I want to put the vocals into. And I write the lyrics as I'm tracking the vocals. When I did 'Chasing The Serpent' I tried the stuff I usually do - screaming and so on - and I wasn't 100% satisfied with that. I decided to try something else and ended up with the vocals that appear on the song. I like it for that reason. It's different." 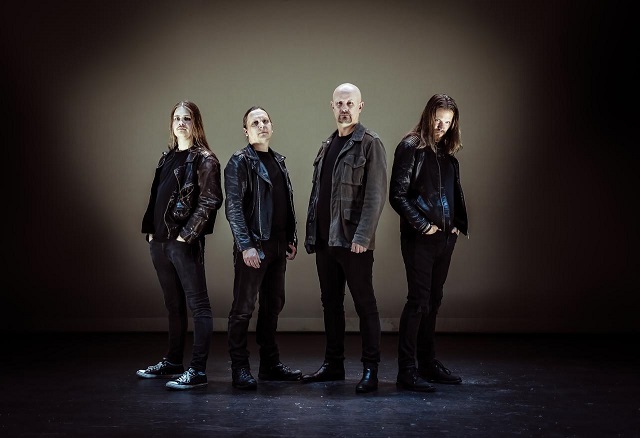 North Star finds Einherjer in what Glesnes believes is the best shape of the band's career, both in terms of internal camaraderie and reception from the press and the fans.

"We've had a lot of really, really good feedback. I'm doing a crazy amount of interviews and the journalists I've spoken to are saying what you've said, that they really enjoy the album and that it's probably the best one we've done so far. That surprises me, actually, because we're something like 27 years into our career and we're supposed to sound like shit by now (laughs). It's really cool to get this kind of reaction from people, but I can say that when we're writing songs these days it's actually easier than ever to do so. We have a really good vibe in the band these days and we've already started throwing riffs at each other for new songs. We are in a good place."