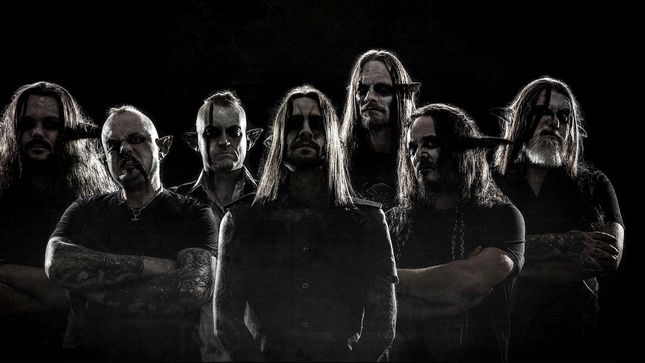 Helsinki’s folk metal berserkers Finntroll refuse to flip a middle finger to their fans by pushing back their latest album any longer. The bands’ latest studio album Vredesvävd drops September 18 through Century Media Records and comes seven years after its predecessor.

Frontman Mathias “Vreth” Lillmåns caught up with BraveWords to talk all things related to the new album, carving out his own defining niche as a frontman, his seminal albums and influences and his earliest introductions to folk metal.

BraveWords: It has been seven long years since Finntroll’s last studio album, so no question fans are hungry for this. Was there any apprehension or debate as to whether to release it now given the current climate?

Vreth: “There was some kind of speculation if the record company is gonna do it, if they want to push it back. But we said if they’re going to ask for it, then we’re going to say no. They have waited long enough. I think it would have been even bigger. You know, seven years is quite the middle finger to the fans already. So let’s not give them any reasons to give them an even bigger middle finger.”

BraveWords: What were some of the predominant factors that led to the seven year gap? Traditionally the band went no more than three years between albums.

Vreth: “During the tour already, when we toured on the Blodsvept album, I could sort of feel that it's gonna be a little bit of a longer break this time, because we had been on the road from like 2007 to 2013. It was like nonstop. We were everywhere, until 2015 actually. So for almost like 10 years, we were touring really, really much and we (were away from) home. For some reason we have always had that after the album tour, we take it easy for like a year and write some new stuff. But this time when we tried to do that, after the Blodsvept album tour was done, the material didn’t feel right. It wasn’t something that we wanted to put out there. There were some good riffs here and there, but there was something missing in the songs.

“We were asked to do this 10 year anniversary of Nattfödd album, and so we just decided to jump on that and maybe after that we could write something. But when we came off that tour it didn’t really still feel right, the material. There was still something that was not really there. And so we decided we’ll take it easy. Do some festivals, maybe some small weekend mini trips and stuff like that and just go with the flow and just see when we write something that we can actually stand behind. And for some reason all of a sudden it was 2019 and we sort of lost track of time.

“In 2019, in the summer, I had a couple of interviews at the festivals we did. And they were just like people asking me, so when are you guys going to do a comeback? A comeback?! We never quit. People hadn’t heard about us for some time and they thought we had quit. I talked to Trollhorn and the other guys in the band (and said) that we need to have an album out next year because people are starting to think that we have split up or something like that. So we just called the record company and asked if we want to have an album out in 2020 when is the deadline for the master of the album? They said if you have it in the beginning of May we can have it out after the summer and everything is OK. And it’s like, OK, we have eight months, something around eight months to write it and record it. We made it. Here we are.”

BraveWords: Yourself and Trollhorn have always been very hands on in the studio and have had that strong chemistry there. Was that pattern repeated for Vredesvävd?

Vreth: “This time around we actually decided that we won’t be that hands on because we have so much going on. Trollhorn, he’s got three kids now, so he cannot be there 24/7 in the studio. For the last three albums I recorded maybe like 60 percent of everything on those albums, he recorded at least 30 percent of all the albums, and we prevailed. But this time we decided we would bring in an external or some kind of engineer that is actually pushing that red button over there and taking care of it, that we’re not gonna be there all the time because we don’t have that.

"I don’t live in the Helsinki area either. So for me to being a month there would be kind of hardcore, either living with somebody or renting some kind of apartment or something. So we decided this time that we will try to stay away a little bit and focus on our own parts. And then, of course, when we started mixing it was, again, me and Trollhorn there every day to mix and also the same thing in the master ... So it was still quite hands on, but not as much actually as the last two albums. But still I guess it’s way more than most bands do.”

BraveWords: Early indications from fans is that what they’re hearing from the new record is very much a homage to old school Finntroll, while still carving out a sound of this new era. Has that been a conscious decision? Aiming to reinvent the band while tipping your hat to the early days?

Vreth: “We always try to reinvent ourselves in some kind of way. For example, the Nifelvind album had this bigger production and they had big orchestrations and stuff like that. That was sort of that reinvention on that album. Blodsvept album had the brass section that played, trumpets, saxophones and almost like swing kind of way at some parts. And this new album also had this kind of new twist to it, and the twist this time was actually to go a little bit back in time to bring back those nostalgic, like end of ‘90s black metal albums a little bit, too and to pay a little respect to our roots as well. For example, this song ‘Ormfolk’, that was the first single, it could easily be on the Jaktens tid album.”

BraveWords: Being the third vocalist for this band after Jan and Tapio, how much do you model yourself after the groundwork they laid for Finntroll, while also setting yourself apart?

Vreth: “I sort of took inspiration from what they did, but I still wanted to make my own versions of the old songs as well. And me coming from maybe a little bit more, so to say like a brutal past, I really wanted to go back to bring my sound into those old songs. And back then Nergal from Behemoth was a big inspiration to my voice so I tried to bring that, for example, and you can really hear that I had this like death metal, black metal kind of background at that point. But also on the way I sort of shaped my own Finntroll persona. It’s sort of developing the whole time and changing.

“It’s a little bit of everything and still with the old songs, I’m not going to change what they did. Just maybe a little bit different feel to it, a little bit more energy into some places. But I’m still sort of wanting to pay respect to what they did and not destroy and rewrite it so you wouldn’t know which song it is anymore.

BraveWords: Finntroll has really carved out the reputation as being a wild live band, with the troll ears and makeup and over the top performances. Do you think that has contributed to the success and real cult following the band has gained over the years?

Vreth: “I’ve always thought that Finntroll was a live band. It’s always been all about the live shows and all the energy and also creating these kinds of, I wouldn’t say roles, but Vreth is sort of my darker side in that way. When you put on your stage clothes and everything, like the makeup and stuff like that, you go into this sort of metamorphosis of some sorts into this other side of you. And then, for example, I feel really liberated by having this persona. If I would represent myself on the stage, I would probably feel more that I’m to be a little bit more controlled and that I couldn’t do this and I couldn’t do that. But when Vreth is coming out he’s allowed to do everything and anything, you know?”

BraveWords: Coming up in Finland, were you familiar with Finntroll or the emergence of folk metal? How acquainted were you with the group around the time you joined?

Vreth: “No, actually, I didn’t know anything about it. I had the first Finntroll album already on my shelf because I was actually back then in the end of the ‘90s, still into tape trading and I traded with a guy from Israel and he actually sent me the first Finntroll album because I had never heard about it. So he sent me back in 1999 and that was my only contact with this kind of, you know, folk metal. Of course I listen to Norwegian stuff like Enslaved back in the day, but that was sort of all that I knew. I had no idea about bands like Korpiklaani and Ensiferum, didn’t know those bands even existed until I joined Finntroll. And I actually didn’t know about the other Finntroll albums either, which I think the guys actually were sort of relieved that I wasn’t the fan or anything.

BraveWords: What were some of the big seminal metal records for you that really helped shape your sound?

Vreth: “When Behemoth released the Thelema.6 album, that was a big album for me and my voice also. And Enslaved’s Eld album has been really, really important. That’s sort of where I started from. That high-pitched screams, really powerful, like long screams, that’s sort of because of that album. Emperor has been with me since In the Nightside Eclipse as well. All those albums have been really important. And Emperor, that’s also probably why I liked the Finntroll stuff, because it had all the majestic keyboard sounds. That’s probably how I got into that area of the metal scene.”

BraveWords: Obviously no one hopes to release an album during the pandemic or have touring plans scrapped or re-routed. But an album like Vredesvävd will certainly give your fans a fantastic distraction, and the early responses have been fantastic.

Vreth: “We’ve really been waiting for those responses, too. We haven’t seen any reviews yet, but I’m hoping for some soon because that’s going to be really interesting. As you said, both worlds, because there’s definitely lots for the fans of my era of Finntroll. I’m not owning that era, but since I joined the band there’s lots of that. But there’s also lots for the older fans. So, yeah, that’s going to be interesting to see how it actually plays out.”