IRON MAIDEN's Bruce Dickinson Talks 1999 Reunion In BraveWords 25 Flashback - “I Want To Put The Band Back Together, So It Can Be Bigger Than It Ever Was”

In celebration of our 25th anniversary, we are digging deep into the BraveWords archives and blowing the dust off some classic features that ran in Brave Words & Bloody Knuckles magazine, which ran from 1994 until 2008!

This time we revisit the energy surrounding the hyped return of Bruce Dickinson and guitarist Adrian Smith back into the Iron Maiden camp. After the Blaze Bayley years were met with much debate, the prodigal sons returned home and with much excitement. In this classic article from April 1999’s issue #29, BraveWords head honcho “Metal” Tim Henderson met with Dickinson to discuss his return to the band and puts to rest any rumors of a feud with bassist Steve Harris. 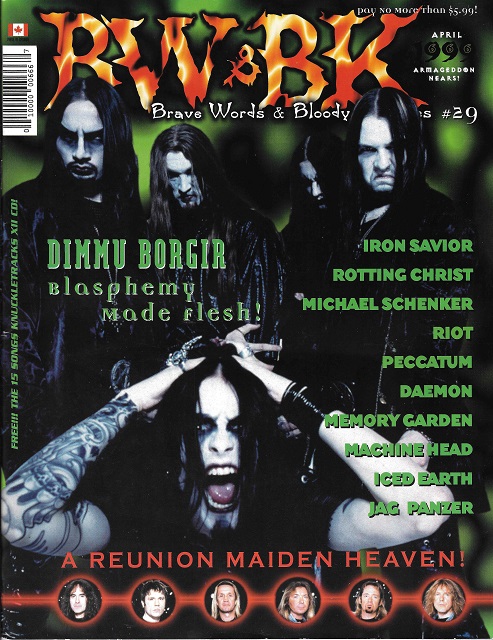 "We're going to be touring in July and August in the States; we're going to be doing two or three weeks in September in Europe. We'll be doing a major album, with a major producer, in a major studio yet to be arranged and I'm dead chuffed to be back and it's going to be great."

Whew! Prayers have been answered. With Maiden's recent following dwindling faster than Eddie's muscle tissue, reuniting with the legendary 'Air-Raid Siren' and the second half of one of the world's finest axe-pairings, seemed unimaginable, especially given the reaction to Dickinson's Chemical Wedding triumph from last year. Dickinson relives the first meeting. 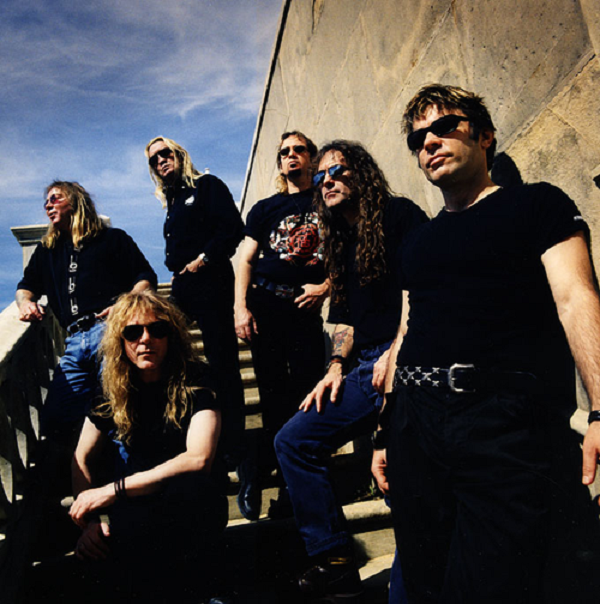 "We all got together at Rod's (Smallwood - Sanctuary Management big boss) house, which is in Brighton, the South Coast of England. I've been bumping into the guys in the band for the last six years socially anyhow. Janick and I have always been best friends, but none of us has ever spoke about a reunion, because we always thought it was off limits basically. Because they had their career and were doing great, I had my career and was very happy with that. At some point, obviously, they had made the decision that Blaze was going to, you know, leave, and I don't know anything about that or the circumstances or anything at all. Nor do I really wish to know - it's none of my business. Rod called me and said look, 'How do you feel about getting back together' and I said, 'Well, let's all meet up and talk about it.' I had always indicated that getting together and doing something live would just be a blast and then I'd always said that I'd think about anything further in the light of people's commitment of doing things in terms of making records... see how we would work together and stuff like that."

"When we had the meeting, I was just knocked over on how far people wanted to just go balls-out to get a great producer, get a great sound and just put Maiden back as the best heavy metal band in the world, bar none."

One detail that continues to annoy Dickinson is this fictitious feud between Harris and himself.  "I don't give a shit about what they think," he remarks about press fantasies, "cuz their isn't one!"

During their heyday, Maiden travelled and conquered virtually every possible nook and cranny on this Earth. Now, fans the world over are breathing a heavy sigh of relief that the X-Factor/Virtual XI era of Maiden is a nightmare to be forgotten.

"I feel very grateful," Dickinson says about fan reaction to the reunion, "but a lot of it had to do with the fact that myself and Adrian and Roy were making terrific records. That has an awful lot to do with it. Also, so many fans have stuck by Maiden as well over the period. Obviously we share a lot of those fans. I'm not stopping doing solo records. Nor does anyone in Maiden now want me to stop doing solo records. But my solo career, in terms of live performance, was never going attain the kind of numbers and arena status and everything else that Maiden did. That was just kind of common sense." 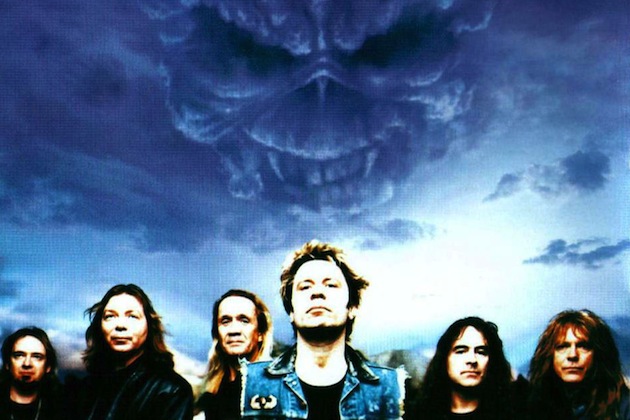 Sadly, Dickinson's solo career never really approached the levels it should have.

"But that's just the way it is, unfortunately. I guess if I plugged away at it for another five years, I could build up a kind of theater circuit... you know what I'm saying. But the point is, I can still make interesting solo records and things like that and I can still tour with the greatest heavy metal band in the world in my opinion, which is Iron Maiden. And all the more so, because the whole lineup is now complete. In fact it's more than complete - it's bigger and better than it ever was, because we're with three guitarists. We really have the opportunity to do something that people haven't done - I can't remember the last time a band had three guitarists."

As for writing new material, Dickinson reveals that "We're going off at the beginning of March and we're going to be writing together. That will be ongoing throughout the whole year. By the time we come to record the record, we should have some pretty half decent material. Certainly, there is a big, big determination from everybody that any of the criticisms that got thrown at the last couple of Maiden records will definitely not be thrown at this one. This album will absolutely take no prisoners and we will do whatever is required to make this one of the greatest Maiden albums ever.

Prior to full-on Maiden, Dickinson and Smith have touring commitments in South America in April, and he promises that "the first thing you'll see in Canada will be a Maiden show. I think that what you have to say here is that this does not affect my ability to do interesting solo records and stuff like that. But what it does do is create the opportunity for Iron Maiden to come back firing on more cylinders than it ever had before. Even when I was with the band in the '80s, the buzz now is much bigger. There are so many bands and so little content these days in music. Generally that's my impression. And Maiden is one of the last bands that can really cut it. This is not a bunch of sad ol' gits getting together. This is a very, very potent little outfit that we're putting back together here and I don't think there is a band in the world who would like to go on after us." 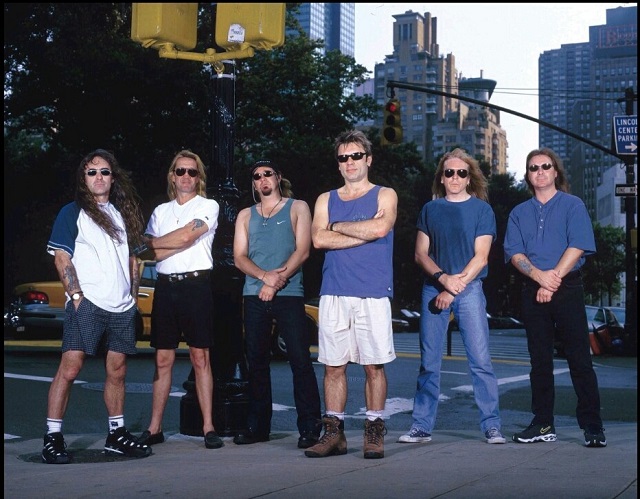 And Dickinson is quite serious that such a meeting will NOT be short-lived.

"Oh, there's no intention of this being short-lived, no intention whatsoever. When we had our meeting, which I have to say, was absolutely fantastic, I had a hangover for three days after. We went down to the pub and had a great time. We all made a joke about all the things the press have been all over like the feud between me and Steve. The first thing I said to Steve was that 'I'm definitely not making a country and western album', and we both laughed. This idea of a feud is a load (of shit). My only reservation was let's make sure we do everything right to make the right album and everybody was unanimous that that was what they wanted to do. There was no question about any compromise whatsoever. That was my question answered. Steve's only question was, 'hey, you're not going to run away after the tour this summer?' I was like, 'I want to be in this, I want to put the band back together, so it can be bigger than it ever was."
How had feelings changed since you left?

"When you leave something, obviously you grit your teeth and say 'You know, I've left it and I have to leave it all behind.' There's that element of determination - 'Damn the torpedoes, let's make a gap between the band I was in and my new future' and the rest of it. It's just human nature, it's just the way human beings do it."

At the piss-up, how much had everybody grown up?

"Actually, it was like I walked out of one door and said goodnight and walked in the next and said good morning. Nothing had changed at all. It's incredible, people said it to me when we did the photo session with Ross Halfin - people were wandering around going, 'It seems like these guys have been together forever.'

And hopefully this will work out for North America, folks on these shores requiring a lot of musical persuading to come out to the shows these days.  "All I can say is, if this doesn't blow the doors off North America... I think this whole thing will take it by storm, I really do. People are not going to believe how many people are going to come out of the woodwork and see this. I'm overwhelmed with the reaction and all I can say is that my intention and I'm sure everybody in the band's intention is not just to live up to expectations, but to exceed them."

To follow a European/North American summer tour, a new studio album is to be recorded before the end of the year, followed by a full World Tour next year. For further updates, access the Iron Maiden web site at IronMaiden.com.

Eddie is smiling in his grave!