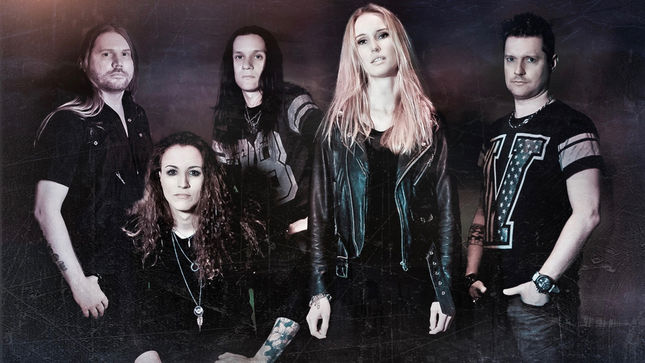 You can only make a first impression once and Metalite is making a strong one with their Heroes Of Time debut due out October 27th via Inner Wound Recordings. The music is unabashedly cheerful and very melodic, but still packs a punch thanks to founder and guitarist Edwin Premberg. Premberg took some time to answer some questions about Heroes In Time, the formation of the band and more.

BraveWords: Talk to me about the formation of the band and where did the band name “Metalite” come from?

Edwin: “Metalite started as a project with me and Emma (Bensing, vocals). I was looking for a sort of ‘poppy’ voice with a lot of energy and Emma was perfect for this role. We wanted get out of the project phase and we needed some talented and experienced members to join. We decided to ask Robert Ö (drum), Roberg M (bass) and Lea (Larsson, drums) to come and join us. Finally the band was complete and I think we had the perfect match with those high energy musicians.

“Well, about the band name. It just popped out when I was producing the first song and sounds. I needed a modern name and Metalite felt like the right name for this, from the beginning ‘project’ and now band. Well, its metal and I wanted the sound to be ‘l33t’ or ‘1337’ (Which means ‘Elite’ in the online language ‘Leet’ used in BBS and nowadays Online Gaming.) Combined it became Metalite.”

BraveWords: Jacob Hansen definitely has a lot of credibility as a producer. What was it like working with him?

Edwin: “It was a real dream to have him working with us. Jacob is very accurate person and truly mastermind when it comes to sound perfection. We are so happy that he wanted to mix and master our songs and the product sounds fantastic!”

BraveWords: How did you guys get in touch with Inner Wound Recordings and why choose to sign with them?

Edwin: “I have listened to the bands that Inner Wound has under their wings and gave it a try to send them our first song, it was actually 'Afterlife'. They answered me pretty fast and we got a nice deal with them.”

BraveWords: Why should listeners give you guys a shot and not just stick with the bands they know? What separates Metalite from everybody else?

Edwin: “Metalite challenges the metal scene with a whole new sound. A very positive and energetic sound that combines the speed and catchiness that power metal brings with a lot of keyboards and guitars. This type of metal is pretty new and there is almost no other band that delivers so many great melodies and hooks on just one album. If you looking for a metal band that plays positive and happy music you have to listen to Metalite.”

BraveWords: Heroes In Time – powerful, engaging title – talk to me why you chose that as the album title?

Edwin: “You can refer to the name Heroes In Time in two ways. First, of course we are the Heroes in Time! (laughs) Second, you can refer to the song Heroes In Time on the album which is about technology-stuff. How the big internet companies store and saves your data that they gather around your internet habits. Likes and shares etc. and the people don’t reflect over that and so on. It’s a very relevant subject right now.”

BraveWords: “Afterlife” was your first music video. Talk to me about that experience.

Edwin: “It was great to work with pros like 11 Frames. We shot the video outside Gothenburg in a storage room for boats, a really cool location that fitted the song and sound perfect. It took about 6 hours to shoot it and it was a good experience for us.”

BraveWords: What are the goals of Metalite? Become the biggest melodic metal band in the world perhaps?

Edwin: “The goals just getting bigger, but at the start there was just to get a record deal and spread this new type of metal. Now my main goal is to get out and play it live at festivals etc. Maybe later, record a new album. But of course we want world domination!”

BraveWords: How about the feeling of releasing your debut album? Has to be a special, wonderful excitement getting the album out and it’s something that can only happen once after all.

Edwin: “Yes! And we´re all very excited about this! As you mentioned, it can only happen once and we have to take this very seriously and don’t hesitate our decisions. And of course stay cool and enjoy the moment.”

Edwin: “At the time when I started play the guitar I was very in to the punk bands like Green Day (Dookie), The Offspring (Self Esteem), Bad Religion (Stranger Than Fiction) and those melodic ‘3-or-4-chord songs’-bands. I played them a lot and after that I practiceed together with the Metallica albums, Kill ‘Em All to Reload. These albums has meant a lot to me.”

Edwin: “We´re planning to have a release gig here in Stockholm this year or in the beginning of the next, which will be our first gig together with the new album. We are so excited about that! And also maybe some festivals next spring/summer. But nothing is certain yet but that’s the plans. You can follow us on our Facebook page for all the latest news and gigs. We're hoping of course to come to your country and play.”