Ego. One of the nastiest words in the entertainment world. It’s a trait not to be admired. And most that have them, don’t even have to open up their mouths. You can see and smell the stench from a mile away. That pretty much summarizes the environment Helloween axe Roland Grapow (along with drummer Uli Kusch) was part of when he was unceremoniously booted from the band in 2001, after arguably one of the most praised records of their career, The Dark Ride. Apparently Helloween guitarist and pseudo-leader Michael Weikath had issues working with producer Roy Z., who helped build the incredible solo careers of Rob Halford and Bruce Dickinson, when those icons sadly left the iconic Judas Priest and Iron Maiden respectively in the ‘90s.

Grapow has left the drama behind and focused on his latest Masterplan, who have released five studio albums and the PumpKings tribute record (from 2017), featuring Helloween songs written by the man himself. Strap in while Roland Grapow take us on his dark ride… 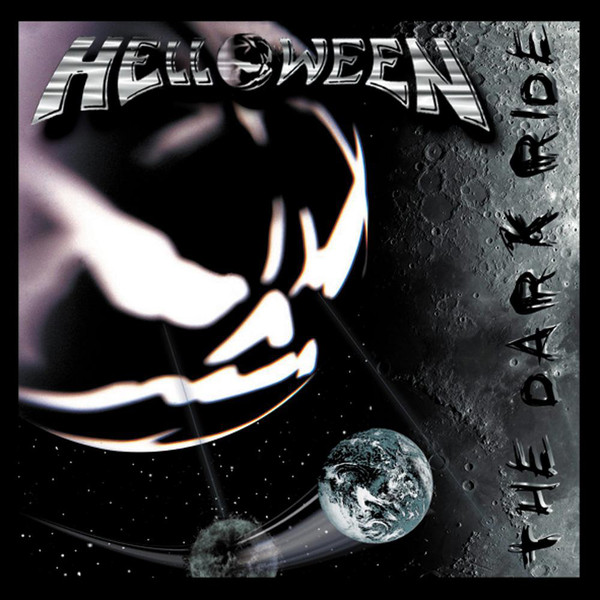 BraveWords: You joined Helloween for the daring Pink Bubbles Go Ape album (and bizarre artwork to boot!) in 1991 and lasted for a very productive 12 years. But the music industry has become a chameleon of sorts since the heyday of the ‘80s.

Grapow: “When you come from the ’80’s, when heavy metal was so great and lucrative; business was amazing. Everything you released was nearly gold or platinum, you know? It’s not so easy anymore, but it’s nice when you have a name in the business. Of course, many people still know me from Helloween, but Masterplan had an amazingly good start. I think every album has some good points, but of course Masterplan (2003) and Aeronautics (2005) have some magic. But maybe the main reason was, when I was fired, I was really crushed. I was like, ‘I just want to fuck them, I want to fight hard to come back’. Because we knew if we didn’t make something good, we are out of the business. It’s easy to be out, because no one takes you seriously just because you were in a famous band once - this is not enough. You have to deliver some quality and that’s how I thought. I take the risk, I produce the band financially and I asked Andy Sneap to record it. I found this guy just six months before, and at that time imagine, no one knew him really. And I heard some stuff he did and I thought ‘what? This guitar sounds amazing!’ The funny thing is, when Helloween played with Kreator in England - and he worked with Kreator - and he came to the show and I was like, ‘Who’s this guy?’ And someone said this is Andy Sneap - and I was like ‘fucking hell, you’re Andy Sneap?!’ I just heard your album! How much do you want?’ I was being stupid, but he liked it somehow. Anyway, we wrote together three months later. I was already in a situation where I was fired - so I told him I would like to have him as a producer. I liked his guitar sound, drum sound and now I’m an even bigger fan. The funny thing is we’re still good friends, and I always go to his studio every two-three years to update my studio experience. I love him!”

BraveWords: What kind of reaction did you get from the Helloween camp at the time?

Grapow: “I heard that Weikath didn’t like it, he said it’s horrible. Weikath’s just jealous. I heard from Markus, and I think he’s an honest guy, that they were really pissed that it was so good. They must have thought, ‘Fucking hell, you kicked him out and then these two guys deliver this? Fuck!’ Yeah, that was kind of revenge.”

BraveWords: Well, the covers record PumpKings had to be another bit of revenge.

Grapow: “Not really, no. I didn’t want to give them bad feelings. They don’t play my songs live, they ignore everything just because if they play one song live, I would get extra money. And they don’t want that.”

Grapow: “It is childish.”

BraveWords: So you have no contact with the band?

Grapow: “No, I have had contact. Well, I had, but I think I’ve given up now because I feel like the contact came just from my side. We played together in Finland (South Park) three years ago. I came back to the hotel, we had just played in Quebec and we were going to fly out the next morning, and I know Helloween was going to play the next day, but I didn’t expect they were already there. I got to the hotel and Andi Deris came out, he saw me, and immediately went in a different direction. And the roadie was coming towards me, he was a friend of mine who worked for Gamma Ray, Helloween, for Masterplan, and he plays guitar in Iron Saviour; Joachim "Piesel" Küstner. So I said, ‘Piesel, what’s going on with this guy?’ And he said, ‘I don’t know, man.’ And I thought, this is bullshit, this is childish, he did the same thing in Moscow 15 years ago. It was fresh then and I thought, ‘ok, leave him.’ And I never did anything to him so he went to the restroom of the hotel, and I went behind him and said, ‘Hey Andi, what’s wrong?’ He told me he didn’t see me. What could I say? So I told him, ‘come on, let’s talk.’ And we spoke for three hours, about everything. And I didn’t want to talk about why I was fired, I don’t care about that. I’m happy, you know? I just don’t understand when you play twelve and a half years in a band like Helloween, and it was part of my career and my life, and people ignore you like you’re dead or something. And they hate you for being something. After we talked I was okay - I mean we were not friends, but something was solved. I was sitting with all the band members - with Sasha, with Markus, with Weikath - and we spoke and I felt okay. I was happy to be honest. But by the end I wasn’t sure if I felt happy alone. Because it’s strange, you know - I had to wish to talk to them. And then one year later I met them in Slovakia where I live, at a different festival, and we spoke again. Everything was fine. I didn’t speak to Andi so much, he was smoking cigars, which he stopped doing now, outside of the backstage area after the show, and he was smiling at me. I was speaking to all of the other members, having fun drinking. I was a bit drunk to be honest. I was so happy, you know? And then I heard this announcement, and I said, ‘Fuck! Sheisse’ Uli was writing me like, ‘What the fuck? These assholes! We should make an album together and fuck them.’ I thought, ‘Uli, this is a great way of making albums together again.’ You know, the same revenge again, but he’s not my friend anymore, he left the band Masterplan. So you see its connected. There’s a lot of emotions still.” 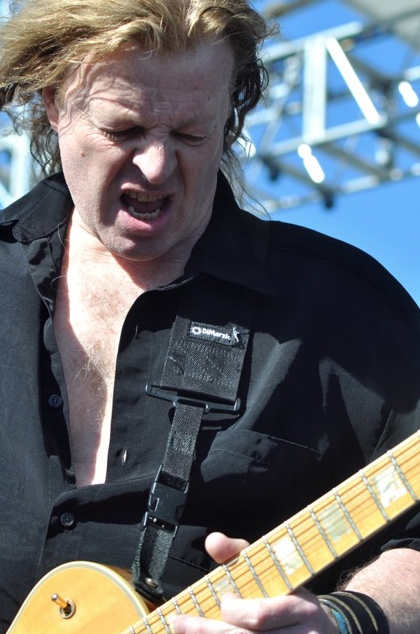 BraveWords: I can sense it. But you got kicked out of Helloween after arguably their greatest record. The Dark Ride is genius, particularly “The Departed (Sun Is Going Down)” and the melodic beauty of “If I Could Fly”. I’ve talked to Roy Z about Michael Weikath not being satisfied with the production. Did you feel any turmoil recording that album?

Grapow: “It was hard work, and a lot of emotions, and fighting. That’s why it’s called The Dark Ride - because that was the band situation. And they didn’t even realize when I wrote the song in the studio, the last one I wrote was ‘The Dark Ride’, but ‘Escalation 666’ was about the band members. And I wrote both of the songs in the studio, I was so late. They nearly wanted to fire me already. I said sorry, ‘I’ll change, I’ll do everything for Helloween now.’ Live, I did everything - I played all the shows - but after the tour we were fired. There was not even one little fight we had. I told Weikath maybe he should play more guitar, because he was really lazy. And fans always came to me especially in South America, asking ‘what’s with this guy? He always looks bored, he’s not enjoying himself”. But he’s still the same. He’s still on stage looking like he’s lost.”

BraveWords: How do you think the catalog you helped build has weathered over time?

Grapow: “I think it depends on the people who grew up with these albums.”

BraveWords: They were pretty experimental after Keeper Of The Seven Keys: Part I and II.

Grapow: “I think you see the input I have was a bit different than just only heavy metal. I think I have something, I wouldn’t say progressive, but if you see Time Of The Oath it is a bit influenced by Dream Theater to be honest. I like the different beats, I’m a very rhythmical person, maybe that’s one of the reasons why I like Rammstein so much. They have this kind of sound, there’s space for the snare - I love this kind of shit. And I come very late as a fan to Black Sabbath.”

Grapow: “When I was in Helloween already. So, imagine, the only song I like was ‘Paranoid’. That’s the one when we were 12 year old kids and we were at school and dancing - and on the other side you had Sweet and Slade and all these bands. Brilliant, but different. I grew up with the best music. But the influence on Helloween was because I was also nine years older than Michael Kiske. He grew up with Halford, Bruce Dickinson, and Geoff Tate - and that’s his influence.”

BraveWords: Have you been attentive to Helloween’s recent career moves?

Grapow: “You never know how long they’ll go, they’re still fighting. Idiots! The same shit! But it’s in every band somehow, it’s about this ego shit, you know. I hate this crap. But I’m happy, I don’t need this anymore. I said to my wife, you know, okay, it was hurting me a bit, all of this success they had, stadiums sold out, and me thinking I could have been part of it. But now it’s a bit of a break. And she said, ‘Stop it! You’re happy - you have me, and you have your studio, and you have your band’. And that’s true.”

BraveWords: She put herself first!

Grapow: “And she should.”