TERAMAZE – From Out Of The Ordinary... 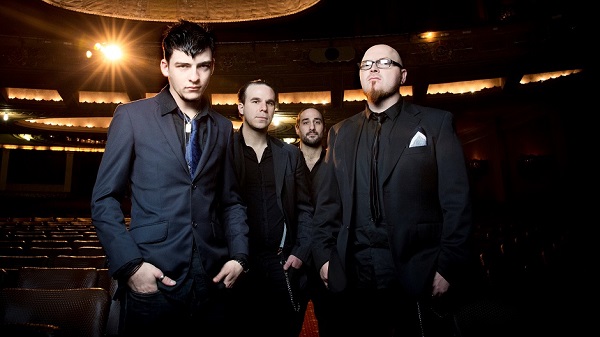 Teramaze first became a blip in Australian headspace back in 1995, launched by guitarist Dean Wells and laying claim to two full length albums by the time he was 18 years-old. It was a short-lived pursuit, as Wells abandoned Teramaze in 2000 for what turned out to be a fruitful career as a songwriter and producer for TV programs including X Factor and Australian Idol, as well as an assortment of pop artists. It was only a matter of time, however, until Wells felt the need to escape the formatted structure of the pop music machine in favour of creating music on his own terms. He relaunched Teramaze and returned in 2012 with Anhedonia, following it up with Esoteric Symbolism a short two years later. It's been a re-learning curve for Wells, which culminated in the creation of the band's most progressive work to date, Her Halo.

"It was a good eight years," says Wells of his pop industry days. "I got into writing a lot of heavier stuff and my publisher at the time told me they liked it but had no idea what to do with it. Somebody finally said 'You should do a Teramaze album.' I hadn't even thought of that because I considered Teramaze to just be something I did as a kid for a bit of fun. I realized I did want to do it again, and around the time we started taking it seriously Jeff Waters from Annihilator heard the stuff and wanted to get involved. He was down in Australia at one point and he came in to produce most of the album with me. So, I put out Anhedonia in 2012, which came out of the heavier stuff I was writing a few years earlier."

"Before Anhedonia there was nothing from Teramaze for eight years. People think we've been around for all this time, but no, there was a massive gap in between. We don't really play any of the old stuff, but now that people are starting to realize this is the same band from back then we're thinking about bringing some of it back. But it does seem to people we've done more than we actually have."

"The 'reincarnation' of Teramaze is basically a new band and the weird thing is people write to our Facebook page going 'When are you going to re-release those first two albums?' I wrote that stuff when I was a kid, the production is okay, the stuff is out there, but I'm not sure I want to relaunch it because Teramaze was such a different band back then. It's strange that people still to this day write to me and say 'I only like the first album...' (laughs)."

Wells should take the feedback as a compliment to the band's staying power, particularly considering the Teramaze debut is 20 years old.

"I didn't know what I was doing back then. I knew what I wanted to do, but when I listen back to it now... I knew nothing. I was still learning. It's good to look back at how I've progressed, though. It's interesting."

Wells has also benefitted from the way technology has progressed since Teramaze's early days, for obvious internet-shaped reasons.

"I've always been kind of tunnel-visioned with what I do," Wells admits. "It hasn't changed my drive but I've made use of the internet, for sure. When Jeff Waters came out for Anhedonia, the only way that happened is because I sent an email to him with the demo attached. I met him online, and that sort of stuff never could have happened when I was a kid. I've definitely taken advantage of it. And it feels good sitting here in my house at the bottom of the world knowing that someone on the other side of the world can get our music in about 10 seconds. That's really cool."

This story is indeed about Wells and his musical pursuits, but he insists that even though he holds the reins Teramaze is an actual band rather than an ego stroke.

"I have a very strong vision of where I want to go with the music. A big difference between this album and the last one is that once the drums were done for Esoteric Symbolism, I did it all on my own. On Her Halo, the band has become so strong in the last 12 months that they really brought stuff in. I had to actually sit back and think about what was best for the album through every little section. I'd listen back to my playing and wonder if I was just wanking in certain spots, stuff like that. Everything has been produced to suit the songs, and Nathan did come in a few times and say 'I'm not sure about that bit.' For the vocals, me and Nathan (Peachey) were about 50-50. He'd throw something at me that would stem another idea and we'd work on that. Nathan had a big part in the melodies and the lyrics; he would bring things in and we'd just mold them until they worked."

"The album was put together so easily because of the way we worked," Wells adds. "It just flowed. So, when we get into the next album - and I've already started writing material for it - will be easier again because we have that sort of vibe."

According to Wells, Her Halo has also opened things up to the possibility of Teramaze touring outside of Australia.

"That's very much in the works, in part because of Mascot and because we've wanted to do it for a long time. We're looking at tours for February and March 2016, so if they come through we'll be playing Europe and hopefully America. Now it seems to be a better time than ever. The last couple albums were out through Nightmare Records and we were actually one of their bigger sellers. We've got a small following in North America, Europe and Australia. It's one of those things as a musician where it's tough because it doesn't matter how good the music is, the question is how to get it out to the people. That's probably the biggest difference between the last album being on Nightmare and this new one being on Mascot Records."

Unlike many of his peers Wells doesn't get his back up when you give Teramaze a genre stamp; in this case, filing them under "Progressive Metal".

"It's accurate for Her Halo (laughs), but if you go back to Anhedonia, that was a lot more heavy metal. They still couldn't put it in a box, though, because it had progressive elements as well. It was just heavier, bordering on thrash with progressive elements. That was stuff I came up with after writing pop songs for years (laughs)."

"Her Halo is a lot more progressive than Anhedonia. I wanted to write something that was a lot more of an experience from start to finish rather than just being song after song after song. It was written really quickly but there were a lot of changes going on in my life at the time, so I think 'cathartic' is the best word to describe the songs. I had all this music coming out, I busted my hand at the time so I had a cast on it, but I took it off because I needed to write more than just wanting to do it. Her Halo is more dramatic, from my perspective anyway. There's a reason it sounds the way it does."

"What you hear on Her Halo is what came out when I was writing. I didn't worry about what people were going to think. In fact, the main reason I got back to doing Teramaze was because nobody could tell me what to do. Nobody could say 'This song needs three choruses and a verse, and we're going to cut that part out because the singer doesn't want to sing it.' That was the pop world, which was fine, but as a songwriter I just do what I want. If people like it, cool."

Summing up, Teramaze has essentially been taking a dump on the pop music industry since 2012.

"Pretty much (laughs). I loved doing pop music and I learned how to be a producer through doing that stuff. I learned how to construct melodies and vocal production, so that's helped me as a writer. It was a great experience but I knew deep down that I was more of a metal musician. People have said there are commercial parts here and there on Her Halo, but we start the album off with a 13 minute song so maybe that balances things out (laughs). From the feedback we've been getting online people are hearing the music the way we hear it, and that to me is a connection that any musician wants. Everything after that is a bonus."