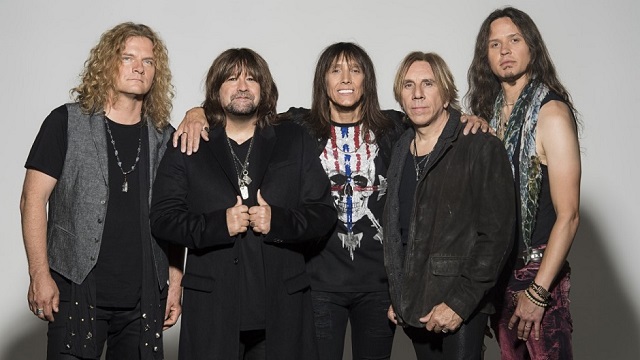 “Step outside your comfort zone, it’s time to let your spirit roam” – much more than just a song lyric on Tesla’s new studio album, Shock – this serves as a directive to fans of the blues based, hard rock band from Sacramento, California. Reason being, Tesla enlisted Def Leppard guitarist Phil Collen to not only produce their eighth album, but also to co-write every one of the twelve songs that comprise Shock.

“Yeah, that’s what happened,” confirms guitarist Frank Hannon, as we begin what turned out to be one of the most honest and revealing interviews in recent memory. “Listen, here’s the thing man… Tesla, as a group, is a team of five guys.” Those being vocalist Jeff Keith, guitarists Frank Hannon and Dave Rude, bassist Brian Wheat, and drummer Troy Luccketta. “And some of the guys, at this stage in our career, are more energetic than others. I don’t know how to word it other than, we probably weren’t going to make another album, to be honest. Phil was very energetic, and very instrumental in wanting to push us to make another album. It’s a collaboration. It’s a Tesla album, but it’s definitely Tesla collaborating with Phil Collen. Like when Bob Dylan and Johnny Cash got together and created Nashville Skyline; it’s a collaboration, there’s no doubt about that.”

There’s a song on Shock called “I Want Everything”. Going back to 1996, Def Leppard had a song named “All I Want Is Everything” on their Slang album. Given the fact that Def Leppard guitarist Phil Collen is serving as producer and co-writer, did that come across the radar? “I had no idea about that song they have. To be honest with you, Phil Collen and Brian Wheat, this is a record they put together. I wasn’t involved in that song. There were some songs I was more involved in as far as writing and recording, and then some songs, literally, I walked in and they said, ‘We want a guitar solo here,’; the rest of the song was already done. That’s the truth of it. So, I don’t know about Def Leppard’s song, I haven’t heard that one you’re talking about. And the song on the Shock album was already written when I walked into the studio. Some songs I was super involved in, and there’s other songs I really had nothing to do with. It’s really a bizarre, different way of recording, and making a Tesla album. A lot of the fans have been shocked by it. Some of them like it, a lot of them don’t. And I understand that. It’s been a different type of project. But hey man, we’re not going to be making the same freaking album we made 30 years ago. Does this album suck? No. Is it different? Yes, very different. Me, I was involved in about half of it, and I love about half of it. The other half of it, I understand that people are not used to it.” 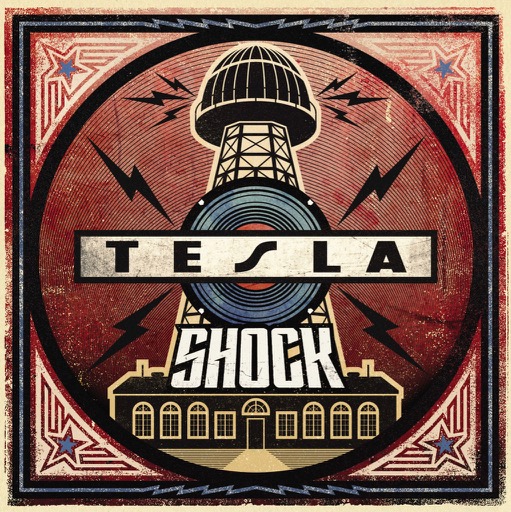 Another different aspect of Shock is the way it was recorded. The CD booklet states, recorded at J Street Recorders in Sacramento, CA and various dressing rooms across America. Capturing the guitars and bass on the road is rather unusual. “Yeah, it was recorded very differently than our other albums. I praise Brian Wheat for being able to keep all the files – Brian Wheat is the driving force on this record. Every band has different albums throughout their career, where one member can be more of a driving force than the others. For example, Led Zeppelin, I think on In Through The Out Door, John Paul Jones was more of a driving force on that album. On this album, Brian Wheat was more of a driving force, along with Phil Collen. I praise him for being able to keep all the files organized on the computer. It was done in pieces – on the road, in a hotel room, in different cities. And J Street Recorders is Brian Wheat’s studio. He took it back to his place, and him and Phil put all the pieces together.”

Tesla has toured with Def Leppard quite extensively; and they’re going out again with them this summer, across Canada. The friendship with Phil Collen came before the working relationship.

“Yeah, Phil and all the guys in Def Leppard have always been very friendly and helpful to us. There’s an undeniable camaraderie there. Like I was comparing it earlier, it’s like when Tom Petty and Roy Orbison got together to do The Travelling Wilburys. It’s the kind of thing where Def Leppard has always been mentors to us. And Phil Collen has always been a driving, coaching, friendly guy. Now, we have very different styles between myself as a guitar player and him as a guitar player; and there’s nothing wrong with that. We’re great friends, and he and Brian really worked hard on making this record. It’s not easy to make an album, it’s a very difficult process. It’s easy to criticize it, and it’s easy for people to have an opinion. But, it’s not easy to take a band that’s been together 35 years, with different members’ personalities, and co-ordinate that on the road, on a fucking computer, piece by piece, then take it home and put it all together. That’s a very fucking difficult process, and that’s what Brian Wheat and Phil Collen did. And, it’s a collaboration.”

The string section heard on “We Can Rule The World” and “Forever Loving You” highlights yet another unique element of Shock. “Those are beautiful string parts that were put together by Eric Gorfain out of L.A. And again, that’s a piece that Phil Collen and Brian Wheat orchestrated. They got a hold of Eric and had him put that on there; it’s a real string quartet. We used them on another track on one of our other records, the last song on Into The Now, ‘Only You’. But the last thing I want to say about Shock and the Def Leppard comparisons is yes, Phil Collen was a big – it’s a collaboration. People make jokes, Tes Leppard, whatever. That’s what it is. We collaborated with this guy and he wrote 80% of the lyrics and songs. Had he not done that, we’d still be without a record today. So, me personally, I’m always cranking out stuff; but it’s not a solo album. It’s a team effort when it comes to Tesla.”

One of Frank’s songs on Shock that really stands out is “California Summer Song”. It’s such a seasonal composition. When you’re listening to it with two feet of snow on the ground, it may seem misguided. But come July and August when the temperatures are roasting, it’ll be cranked on stereos from coast to coast. “I hope you’re right. That one’s getting a lot of hate from the fans, maybe cause of the timing of it. And it’s got the kind of poppy, fun lyrics; but it’s only rock ‘n’ roll man. People are taking stuff too seriously. It’s supposed to be fun and feel-good; that’s all it is. It’s no different to Steve Miller singing, ‘I’m a joker, I’m a toker, and I’m a smoker.’ It’s the same vibe as that.” Some of the disgruntlement may stem from the similarities between ‘California Summer Song’ and Kid Rock’s ‘All Summer Long’. “Well, didn’t he get that from ‘Sweet Home Alabama’ by Lynyrd Skynyrd? People can criticize whatever they want, let’s just have fun. It might be polished a little too much, but it’s just a fun song. ‘Gettin’ Better’ on the first Tesla album is a pop song.” 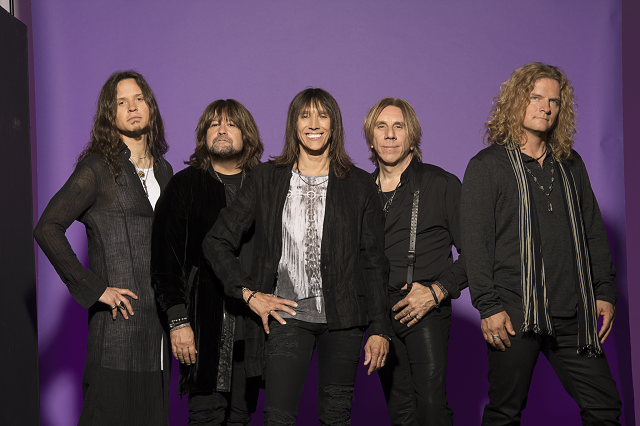 “Love Song” from The Great Radio Controversy is arguably Tesla’s most popular tune. Love is felt the world over; it’s a universal theme that’s been really good to Tesla over the years. On Shock there’s “Love Is A Fire” and “Forever Loving You”, how does Tesla continue to draw from the same muse without being repetitive? “That’s a good question. I really don’t know. Love is an inspiration. The theme of a lot of Tesla songs – even a song like ‘Hang Tough’, is driven by the concept of love and picking yourself up off the ground. We’ve always tried to have integrity and put positive messages in the lyrics. When you’re putting stuff out there for people to consume, it’s like you’re serving them up some food. Music can be very spiritual and uplifting; or it can make you fucking angry, and make people go off the deep end – which we do not want to do! Our mission has always been to try and contribute love and positive, uplifting messages to the world. But, songs like ‘Solution’ (from Bust A Nut), we keep it real. It talks about how all the kids are on dope. But we turn it around, what’s the solution to make a change? Even if we sing about something real, like ‘Modern Day Cowboy’ (from Mechanical Resonance) – ‘the foreign lands with their terrorist demands’; all that shit that’s going on in the world. We still try to put a twist to it that brings it back home.”

Despite a slight change in musical direction on Shock, when it comes to their live shows, Tesla are tried and true. “Yeah, Tesla is still a very high energy, kick ass, rock ‘n’ roll live band,” testifies Hannon. “After all this time, we’re still not running any backing tracks, or any of that shit. We’re real when it comes to playing live in concert. We’ve been playing the opening song (from Shock) ‘You Won’t Take Me Alive’ live, and it’s been going down fantastic.”

“Come see our headlining show - we’re celebrating the 30th anniversary of Great Radio Controversy and we’re playing songs like ‘Be A Man’ off that album. We haven’t played that live in 30 years. I mean, we probably played ‘Be A Man’ maybe a total of five times live back then, because it was hard to do. I transposed it to the key of D; we’re playing it and it’s been going over great. We’re playing ‘Miles Away’ (from Into The Now) and we’re playing ‘Changes’ (from Mechanical Resonance), which to me, is one of Tesla’s greatest songs. We’re really digging deep into our catalogue on this tour this year. It makes for a really great show!”