THE L.A. MAYBE Vocalist ALVI ROBINSON Auditioned For AC/DC - “I Thought It Was A Prank At First” 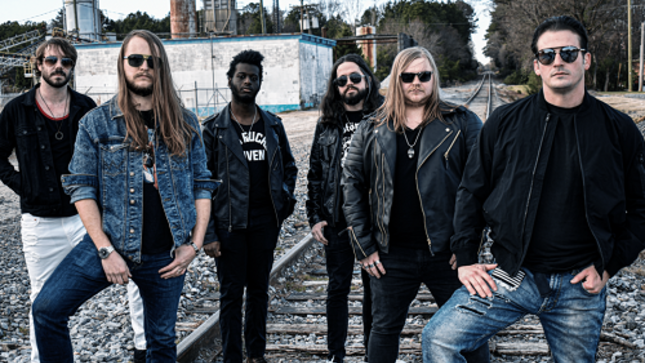 Hailing from the southern heat of the Carolinas, The L.A. Maybe is a fresh and exciting entry into the New Wave of Classic Rock. Their spectacular debut album, Dirty Damn Tricks, is out now.

Rewind five years to 2016. The L.A. Maybe lead singer Alvi Robinson got to play with AC/DC as a potential replacement for Brian Johnson! “It was crazy! That actually happened with Brian losing his hearing, and I was in an AC/DC tribute band. From what I was told, Cliff (Williams, bassist) had seen me on YouTube, and that was it,” recalls Alvi, on the line from his home in Greensboro, North Carolina.

“Their agency called my guitar player at the time, and literally asked if I would be interested? What kind of silly question is that! ‘Yes, I’m very interested!’ That experience was a good time, but it was stressful to say the least. Their next show was in Atlanta, Georgia. They were en route, on tour. My flight was about 55 minutes from Raleigh to Atlanta. We actually did about three hours of jamming in a rehearsal space; we did the current set list for the tour they were on. Then we did a few of my favorites. It was 10 AM when I went into the studio with the guys. We started out with ‘Touch Too Much’ and ‘Back In Black’, those were the first two we ran through, just to get a feel for everybody. Then we just worked through the set list.”

Maintaining composure, integrity, and professionalism when you’re six feet away from Angus Young couldn’t have been easy. “It was nerve-wracking. I actually warmed up with the sound crew first, their guitar tech and drum tech. We played through a few songs, and with those guys, I was so nervous I could barely sing at all. It made it even worse. But when the band got there and fired up, and it sounded just like AC/DC with Angus on the guitar, it was just like stepping on stage. All your nerves just vanish, and you do what you’re supposed to do; and it worked out nice. Not as nice as it could have been with me on tour with them, but it worked out a hell of a lot better than I expected.”

Alvi was one of only four singers who got to audition with AC/DC. Ultimately Axl Rose from Guns N’ Roses got the gig. “Yeah, he was actually down there with me; I didn’t know that. But he was in the hotel, same studio, and all that. I found out once my plane landed; a guy that I know is an AC/DC fanatic. My plane landed and I turned my phone back on, and he said, ‘Just a heads up. Axl Rose was down there too.’ I was like, ‘Oh, great.’ At that point, I kind of knew I had lost the gig, but… to be honest with you, I thought it was a prank at first. I was actually texting around, jokingly, once I saw the paper headlines that Brian was off the tour, I was saying to my friends, ‘Anyone know how I can get in touch with AC/DC and offer them some help?’ Then a couple hours later, my guitar player was calling me and claiming they had got in touch with him. I thought it was a bad joke for a long time. They did a really good job of getting me to the airport and faking everything,” laughs Alvi.

It’s rather ironic that after Axl Rose lands the AC/DC gig, Alvi Robinson goes on to front a Guns N’ Roses tribute band called Nightrain. “Yeah, I’ve got a buddy who makes fun of me for that all the time. He’s a guitar teacher, and he tells his students my story.” In fact, Alvi got to see Axl fronting AC/DC on that short-lived tour. “Actually they came through Greensboro. I was still talking with the tour manager and he got me backstage passes. I was sitting right up front watching Axl do my job. I’d already met the band, but I went backstage, hung out; Cliff and (drummer) Chris Slade were actually back there. Never did meet Axl, still to this day have not; and I may never. It’d be cool to meet him. At the time, the media made it sound like I hate the guy, or we had some kind of feud, but the reality is, I can only sing the stuff I can sing cause as a teenager, I worshipped Axl and pretended to be him all the time. There’s no animosity there, at least on my side.”

Shifting focus to The L.A. Maybe, there’s obviously some AC/DC in this young band’s sound. Jackyl comes through loud and clear, along with hints of Junkyard, even some Buckcherry. Those influences are melded together to create a unique style of rock ‘n’ roll. “Yeah, it’s been interesting,” says Alvi. “I think the group of guys… we all come from different backgrounds, and that’s what has helped it to have its own sound. Dallas (Dwight, guitarist) is a big part of the songwriting and he loves Buckcherry. We just want to play rock ‘n’ roll and have a good time; put something out there that people can hear and feel good about.”

Alvi shares how he connected with The L.A. Maybe. “So, I’m currently in a GN’R tribute band called Nightrain; we’re based out of Raleigh, North Carolina. But Dallas from The L.A. Maybe was doing a project as well, and he had contacted me to fill in for his singer at the time; they were going to do a bunch of GN’R tunes. I actually kind of blew it off because I get asked pretty frequently to do stuff like that. I didn’t want to be part of another cover band. We spoke briefly about it, and I told him if I had the time, sure, I’d help him out. A week or two later, he contacted me with the words ‘Original Music.’ After that it was game on! He and Rahsaan (Lacey, bassist) drove up to Raleigh, we jammed a couple songs just to make sure we could get along, and I think four days later I was in Dallas’ studio behind a microphone. And six months later we’ve got an album!”

If you’re wondering about the significance of the moniker The L.A. Maybe… “Ah, well, Dallas actually coined that one. As I understand it, he was in an airport, and some guy was on a cell phone having a conversation, and the comment was, ‘Yeah, I’ll give ‘em the old L.A. Maybe.’ Which, I guess is a more or less… probably not… an indecisive yes. He thought it sounded cool. It’s funny with band names, you can have what you think is the best band name, and everyone hates it. Or you can have Lynyrd Skynyrd – he was a teacher, and everyone loves it.” The album title arose in a similar nature. “That was coined as a phrase that came out of the drummer’s friend’s mouth. ‘That woman and her dirty damn tricks.’ They thought it sounded cool, and we went with it.”

Dirty Damn Tricks was recorded in Rock Hill, South Carolina. “We did all the studio work ourselves, so we weren’t paying anyone for it. With that being said, we’d record, and if we wanted to go get a pizza, we’d go get a pizza. If I was having a bad night, not singing well, we’d come back tomorrow. So, we saved a lot of money, and it gave us time because we were writing the songs as we were recording them. If we wanted to try a different vocal track or guitar lick, or add something, we had all the time in the world. I will say though, about six months is what we spent on this album. The final masters however were sent to Machine down in Texas; he did Lamb Of God and Clutch.”

One of The L.A. Maybe’s peers, Dirty Honey, are also unsigned and had a #1 single with “When I’m Gone”. Coincidentally, there’s a song on Dirty Damn Tricks also called “When I’m Gone”. Was that cause for concern at all? “Dallas actually wrote that about a friend of his who passed away from suicide. So, the message is quite different. I guess you’d never really name a song if you were worried about if somebody else had already named their song that. I think 3 Doors Down has a ‘When I’m Gone’ as well. You’d never get anywhere if you just worried about that. I would strongly disagree with calling the album whatever their album name was obviously.”

Completely self-taught, Alvi reveals how he honed his amazing voice. “Growing up, my Dad was in bands. So, I just kind of watched him do it. They’ve got home video footage of me behind the microphone stand with a little plastic guitar, three years old. As far as taking it seriously, I did chorus and all that stuff in school. I stopped that in elementary school because I tried out for a solo part that I did not get, and I just kind of gave up after that point. Plus, when you’re ten years old, you don’t really know anything. I was in high school and one of my best friends was always in the theater classes, and he plays guitar. I was on stage one day hanging out with him, and the mics were hot. I grabbed one and did the ‘Screaming For Vengeance’ line that Rob Halford does, and my buddy Justin who is all into that sort of music just runs up the stairs – ‘Dude, you’re the singer of my band now!’ So, pretty much around 16 or 17 years old is when I started putting any real effort into it.”

“I have no vocal training on how to be a singer. A lot of it was just copying styles of other singers. Priest is one of my top three favorite bands. Trying to imitate Rob Halford is pretty much impossible. But I’d listen to him and I liked that sort of sound. What actually helped me a lot was Geoff Tate from Queensrÿche, because he hits the same notes, but he doesn’t have any grit or gravel in it; mostly clean. Adding that was something I did later on, once I was capable of capturing the note, then I learned to add that growl to it. Butch Walker from Marvelous 3 was a big vocal influence of mine. He does a lot of falsettos, so training his style got me into that area. It’s just a lot of different vocal influences I copied in order to learn how to sing certain ways.”

Throughout it all, Alvi doesn’t take himself too seriously, as evidenced by the video for “Mr. Danger”, in which he’s wearing a purple Golden Girls shirt. “Actually, the drummer hated that shirt, and he did not want me to wear it. I was like, ‘Dude, I’m wearing that shirt and people are going to love it!’ It’s funny, and sure enough, everyone has commented on that. Some people take music so seriously… I’m more like the ‘80s hair band kind of guy. Those guys didn’t take anything seriously. I just want to have a good time. I don’t have a message to send. I’m not trying to change the world or tell anyone how to live; or write a song about politics. I just want people to smile and get a beer.”