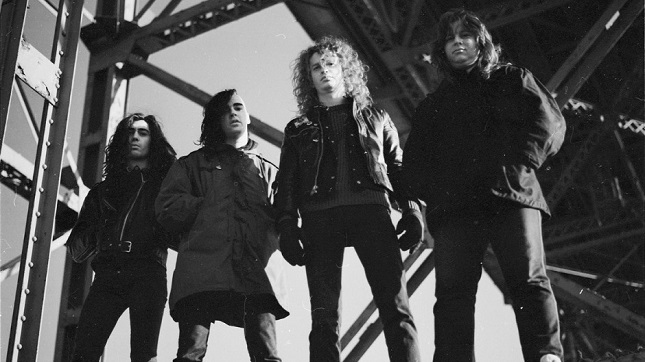 When we wrangle up Voivod drummer Michel “Away” Langevin to talk about the new reissues of the band's classic albums two, three, and four (that's Rrröööaaarrr, Killing Technology, and Dimension Hatröss, from 1986, 1987, and 1988, respectively), the man is under the gun designing artwork for upcoming Voivod fest appearances and releases, and juggling writing the band's next album with gigging, but he's still eager to talk about the three albums, which are now re-delivered to fans with excellent packaging and a wealth of bonus material, each reissue being made up of two CDs and one DVD.

“I’m very happy,” he says. “It was about 10 years of work, but half of it was in limbo when Universal bought Sanctuary; it slowed down the process. It was a lot of work to put the Iron Gang archives in digital format; photos, cassettes, VHS tapes, art, a lot of work. Finally it’s out and it sounds amazing. Also, like you said, the packaging is top notch. The people into Voivod are really excited about it.”

Langevin says that this whole project started in 2007 when he was contacted by Sanctuary to reissue the albums. He started in on it back then, dealt with the record-label delays, and was eventually contacted again by BMG to finish it up.

“By then I had more material that was handed to me over the years, on DVD-R and all that. So finally, everything is there. Everything from the Iron Gang archives. If you combine that with the reissue by Alternative Tentacles of To The Death '84, everything is available now. Finally. I can move on,” he says with a laugh. 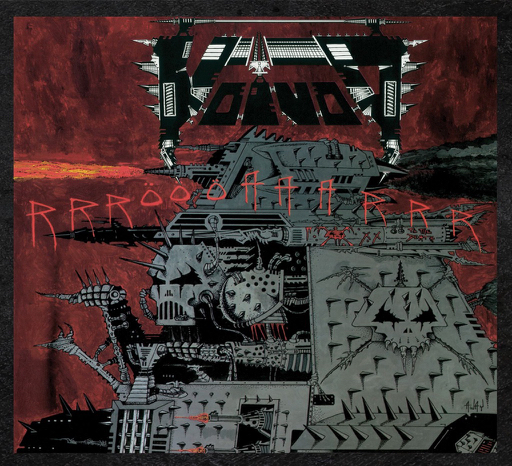 “A box of tools down a stairway” - Rrröööaaarrr

Rrröööaaarrr – The Bravewords.com review by Greg Pratt
The first of the three 2017 Voivod reissues is 1986's Rrröööaaarrr (9/10), a glorious mess of speed/thrash metal played way too fast, the barbaric sounds of isolation and progression clashing for top shelf space. You can't really remaster something that sounds like Rrröööaaarrr in the first place and expect it to shine, but that's the beauty of this album. The live material on CD 2 is the Iron Gang Spectrum '86 recording, which has sound quality that's going to horrify anyone born after 1990 and an ultra-cult early-Voivod track listing. The DVD is filled with more goodies than anyone could get through in a reasonable amount of time: slideshows of artwork, studio and live photos, video of four concerts (including the band's first US show in 1986), audio of the band's first live show, audio of rehearsals from 1983 and 1984 (!), a Piggy sound collage from 1980 (!), and, most interestingly, a rough mix of Rrröööaaarrr that, I think, sounds cleaner than the album itself. Fascinating treasure trove of material here.

“A friend of mine told me it sounds like a box of tools down a stairway,” laughs Langevin about Rrröööaaarrr. “For a few years I had mixed feelings about this one, but when I listen to the new version, it had been a while since I’d heard it, I totally understood the context and the urgency of the music and the attitude and all that. These were very happening years, ’85 and ’86, for us, very exciting, the whole thrash metal movement was exploding and everybody was trying to play faster than Venom and Slayer and DRI, so there is a lot of energy on the album.”

A lot of energy, or maybe even, as Langevin admits, too much energy.

“We might be playing a little too fast for what we could achieve,” he says. “But it’s great; it’s really impulsive and youthful. It really represents well the Cold War years we were living in. It’s a mixture of all that. I understand it more now. I remember we were not disappointed after the release, but we thought we could do better. If I remember well we actually slowed down the bass a little to really be able to play every note and every kick drum for Killing Technology, so Rrröööaaarrr is definitely the fastest it was done.”

Langevin says that the album represents the times well; for those who lived through the '80s, some of the representative moments of that era that he mentions will ring a bell.

“Back then, there was lots of headline noise about the Challenger explosion and the Chernobyl explosion and the Reagan Star Wars project and all that,” he says. “It really influenced us in terms of expressing our anxiety.”

As far as the extras go, Langevin says that it's really exciting to watch the crowd in the videos and that despite the sometimes-shaky quality, they serve as a great document of the Rrröööaaarrr era.

“Most of the VHS tapes were sent to the Voivod PO box in the '80s and were filmed from the mosh pit, so it’s really raw,” he says. “It makes it exciting; you really feel like you’re there. Of course, some of the footage is a copy of a copy of a copy that ended up in our PO box, so some of it is really grainy. But it’s a miracle that I was able to retrieve all of that stuff, especially the Iron Gang demo cassettes. The live footage has some historic value, in some cases. The first show in the USA we did, with Cro-Mags and Venom, is there. The quality is very raw, but I was very happy to dig that out of the archives.” 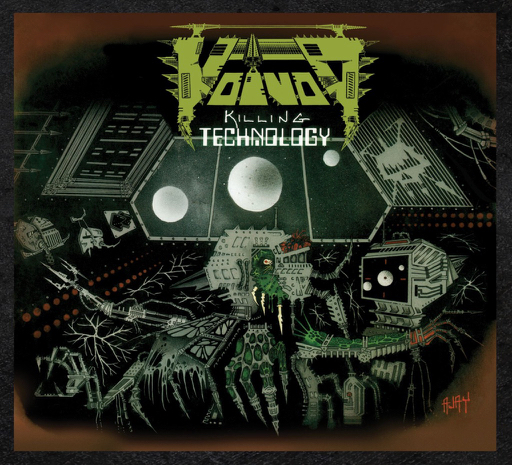 This Is Not An Exercise - Killing Technology

Killing Technology – The Bravewords.com review by Greg Pratt
The second in Voivod's reissue campaign is 1987's Killing Technology (9/10), which is when the band really started to come into their own. Showcasing a much more progressive sound, Voivod was still dealing in ultra-abrasive caveman trash metal, but it was leaps and bounds ahead of their first two albums; they started utilizing slower tempos and progressive elements and finally realized what they were trying to be. It's a classic album, and it's great to hear it again while enjoying the deluxe reissue packaging before diving into the second CD, which is another Iron Gang live release, this one the Spectrum '87 show, which, much like the live show on the Rrröööaaarrr reissue, sounds like a vacuum cleaner, but it's a vacuum cleaner playing totally killer early-era Voivod tunes. Over to the DVD and, again, there's a ton of great stuff here: video of five (!) concerts, more artwork and photo slideshows, and audio of a live show to round it all off.

“Killing Technology is my favourite album from Voivod,” says Langevin. “I love every album, but this one is really my favourite. It really has all the ingredients of what we’re trying to achieve: prog rock, psychedelia, punk, metal, goth, it’s all combined in there. Also the sound of it is representative of what we had in mind. It was our first experience in Berlin in a recording studio, and the city really rubbed on us. The studio, Musiclab, was right by Checkpoint Charlie and we tried to go on the other side of the wall and they wouldn’t let us through because we looked too funny (laughs). The atmosphere, it was a bit oppressive still. We will always have a special relationship with Berlin.”

The extras here have one concert in particular that is special for Langevin: live at Rex Club in Paris, France in 1987 (all the live shows on this reissue are from '87).

“My favourite is Paris ’87,” he says. “Through my career, they were very raucous and chaotic shows, great energy from the crowd, like in Sao Paulo from a few years ago, but my favourite one that I will always remember is Paris ’87 when we played there with Kreator, it was just the most insane crowd ever (laughs). So I was finally able to track down some footage of this show from a fan of Voivod; I was really happy.” 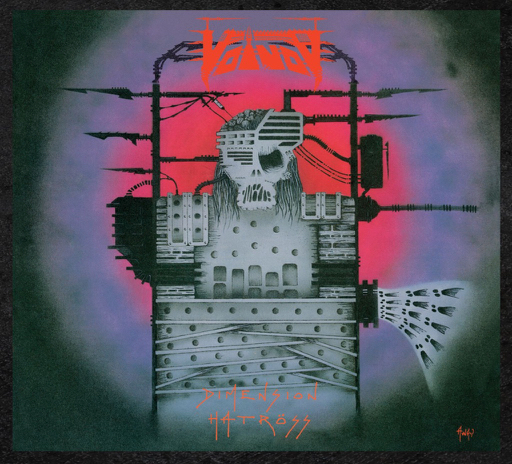 Dimension Hatröss – The Bravewords.com review by Greg Pratt
By the time 1987's Dimension Hatröss (9.5/10) rolled around, Voivod had taken what they laid down on '86's Killing Technology and were getting ready for their Nothingface masterpiece with this collection of songs that pulled back the tempo, upped the songwriting ante, and showed a band improving on their instruments at a shocking rate. It's just classic after classic (“Tribal Convictions”!) on this mind-melter, which, like all their albums, has held up remarkably well. The second CD continues the Iron Gang reissues, this one the A Flawless Structure? live show from December 1988 in Montreal, notable for the inclusion of “Batman” and the “War And Pain Medley”, which basically sounds like four songs you can't understand instead of just one. Awesome. DVD contains an audio track of the Dimension Hatröss demo, which is definitely of note for Voivod fanatics, as well as video of no less than four '88 concerts, and more artwork and live and studio slideshows.

“Everybody was really improving individually, musically, so I think on Dimension Hatröss, it’s the first time that I really felt that I could not hear mistakes in my playing after,” says Langevin. “On the first three albums I can hear them, and I’m trying to reach a certain level… [Guitarist Denis] Piggy [D'Amour] had started playing guitar when he was nine but the rest of us were still kinda new at it in a way. So it’s only on Dimension Hatröss that I find I personally reach a level I was looking for and sort of became professional, in a way. Like, it could have been done on a click track but it was not. At this point, we had been rehearsing so much and touring so much, we were really tight as a unit and we were ready when we got into the studio.”

Which isn't to say it was an easy album to record. Langevin says it was complicated as the band was touring for Killing Technology and had to record Dimension Hatröss in Berlin at the end of the tour, so they had to write it before leaving for tour with Kreator.

“Everything was done very quickly,” he says. “We did try some songs live, before recording it in Berlin during the Kreator tour, but they were different arrangements. Harris Johns from Musiclab had moved his studio in a bigger place with more electronic equipment, so we had fun with his gear as well. Blacky [bassist Jean-Yves Theriault] and Piggy had already been using effect pedals, but for me it was new to use sampling technology and electronic pads. Although I didn’t overuse it, it’s only on a few songs, but it did give an industrial side to the metal we were playing.”

Langevin says he was limited in the choices for the bonus material on this one because right after Hatröss came out, Piggy was diagnosed with a brain tumour and the band cancelled a world tour.

“Once he was under treatment with pills and was able to tour, we did a US tour with Vio-lence in ’88, and that’s about what I had, a few shows from this era. But I was really pleased to hear Snake [vocalist Denis Belanger] in some of the footage telling the crowd, 'We’re back; he’s back,' and I remember the feeling of being back when we did that tour with Vio-lence in the USA. It brought memories back for sure.”