ACCEPT - The Drought Is Over! Live Music Returns!! 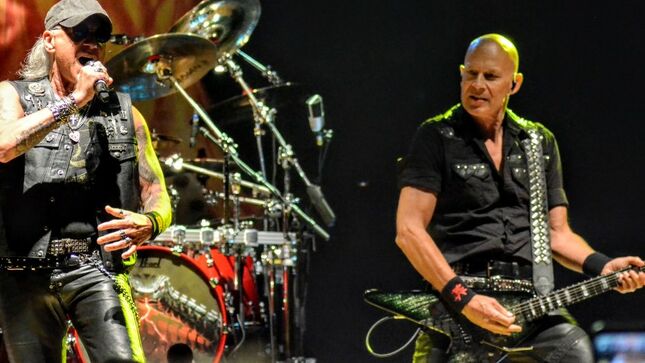 After 16 months without experiencing a live concert, in-person (a period of musical inactivity I could never have foreseen) and having to cancel a half dozen international flights, to overseas festivals that never took place, it was FINALLY time to rock again! How fitting the show took place on the Friday of a holiday weekend, celebrating Independence Day: freedom. First time to Penn's Peak, in the namesake Pennsylvania hometown of Native American track/football star, Jim Thorpe. Due to the pandemic, this gig was repeatedly cancelled/rescheduled and was supposed to be just one of many US dates. As it was, Accept were now using this gig as a warm-up for the high profile M3 (predominately) 80s hair metal festival, a stone's throw from the nation's capital, later that same weekend: the only other North American stop left on their 2021 itinerary. Also appearing, in PA, was Blackfoot.

This is four-wheel drive territory. Need to navigate gravel covered switchbacks to get to the mountaintop venue. Remote location (picturesque rural countryside, two hours from either East Coast metropolis: Philly/NYC) and holiday weekend conspired to skew the crowd towards an older, predominately male demographic. Then again, on the current release, singer Mark "Analog Man" Tornillo skewered Millennial touchstone like mindlessly incessant digital screen worship ("Zombie Apocalypse"), social media/Influencer so-called "culture" ("Overnight Sensation"), and a self-absorbed, whiner/complainer perceived victim ideology ("Sucks To Be You" / "Not My Problem"). Never mind Manowar's proclamation, "Wimps and posers, leave the hall." They never even made it into the building! 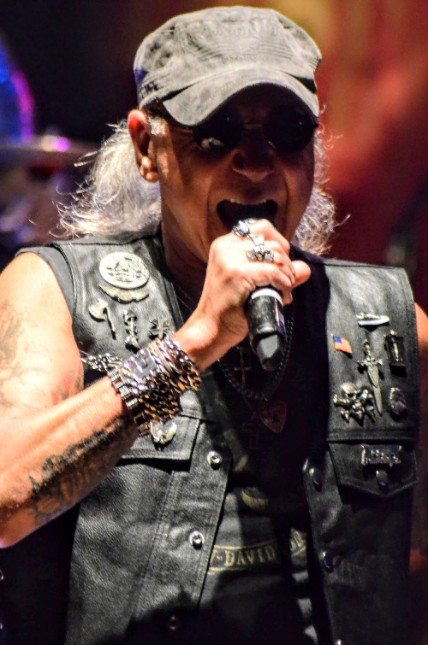 From the outside, the venue looks like any other 2,500 capacity club. Inside, an all wood constructed hunting lodge (befitting its natural surroundings), with a balcony on three sides. A lone can of Bud Light sat on the drum riser, for the singer, while Christopher Williams had a quart of Gatorade behind his drum kit. The rest? Several bottles of water, near their respective stations. During the opening "Zombie Apocalypse", I was thrown out of the photo pit (hence the reduced number of images accompanying the story). Apparently, even with a photo pass, the barricade is only for show, no one allowed in (not even security stationed there). After "Too Mean To Die", Tornillo said, "Feel like something's missing," and explained guitarist Uwe Lulis' absence, due to pandemic restrictions preventing overseas travel. Hence he's still stuck in Germany! No matter, two showy axemen were still onstage.

"Restless & Wild" saw the aforementioned (Wolf Hoffmann and Phil Shouse) initially sway in unison, on Wolf's side, but later repeated the procedure on the opposite end of the stage. Bassist Martin Motnik remains stationary, virtually tied to his backing mic, and offset, stage right, half-way between the edge of the stage and William's riser. As Wolf switched guitars, they started the undercurrent of "London Leatherboys". Eventually, he and Phil appeared center stage, the headstocks of the twin Flying Vs aimed directly at the crowd.

Maybe it's the triple guitar threat, minus one, scenario (or pent-up inactivity: their last show was Dec. 2019, in Estonia), but Tornillo was all over the stage, like never before. At times, he was the meat in a twin V sandwich! Just once did they experience any technical difficulties (as opposed to the openers, who had several sound/mix issues), Hoffman switching guitars on the fly, but that's what this "warm-up" show was about: working out any layoff-induced kinks. "I'm tired of being cooped up," shouted the frontman, prior to "Overnight Sensation", which he wryly dedicated to "keyboard warriors." He was at the front of the stage, behind him, the two guitarists matched mild, forward hip thrusts. 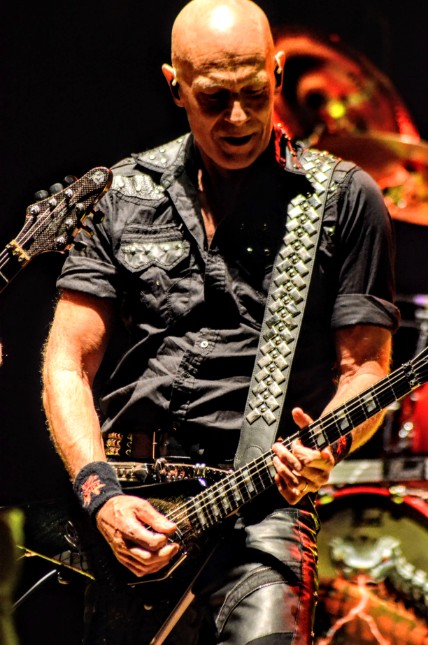 Williams pounded out the start to a fast, punishing "No Regrets", albeit still a bit of a surprise inclusion. In a complete change of tempo, "The Undertaker" came next. Hoffman pumps his fist to the beat and others clap along, without prodding. During the solo, Wolf at the fore, behind him Mark does a little "dance". The final notes belong to Phil, alone. A revved up "Final Journey" is another unexpected guest. Tornillo, standing in the wings, air drums, as the two guitars square off, center stage. Williams stands behind the kit, sending the beat from the kicks drums (and clicks his sticks, overhead) to commence "Shadow Soldiers". Tornillo does his toy soldier march. Everyone sings the titular chorus. Fists are thrust overhead as the familiar "Princess Of The Dawn" rhythm begins. The crowd sings along (Tornillo commands, "Louder!), as a yellow spotlight pendulums from side-to-side, illuminating the singer. Later the color scheme is purple. Having played the song so many times, Wolf hams it up, with some whammy bar action. Having earlier left the stage, to fetch a V, Shouse eventually returns and the six-string tandem emphatically lay down the trademark sound.

Everyone has a vocal part, on the yellow/green lit "Midnight Mover", which is short and ends crisply. "Corona 19 can stick it up your ass," bellows Tornillo for the appropriately prophetic "Pandemic". Hoffmann takes a rare solo foray to stage right (across from his usual post). On the way back, strobes gently flash the two axemen, bending at the waist, hair flailing. At least Phil's anyway! As the song winds down, the two are cranking away and ultimately in lock-step, twin leads. They share a celebratory fist-bump, once done. The pre-recorded voices of children singing introduces the scratched record, Tyrolean melody that becomes "Fast As A Shark". Strobes are blasting onstage and off (atop the crowd). This killer display of twin leads closes the proper set.

The empty stage is bathed in blue, awaiting the encore. Like he did to begin the night, Williams leads them onstage. Well, actually, it's just he, Wolf and Mark, to kick off "Meta Heart'. It's sing-along mode, once again. The drummer again stands, as he plays. Tornillo has finally ditched the leather biker vest, now resplendent in sleeveless tee. The song concludes with a thunderous Williams flourish, the others surrounding his riser, eyes watching the skinsman's skills. "Teutonic Terror" follows, with Hoffmann venturing to the lip of the stage, bobbing his head along with fans plastered to the barricade rail. So how to end this rejuvenated night? Like so many others, before it. All the lights focus on Hoffmann, alone, center stage. He's actually lit from below, for "Balls To The Wall", one last chance for the audience to join in the singing. Looks like the musicians were having as good a time as the fans.

Like any addiction, rekindled, the thrill is back. Long may it remain!