An Evening With BRUCE DICKINSON Takes Off In Florida; Review And Photos 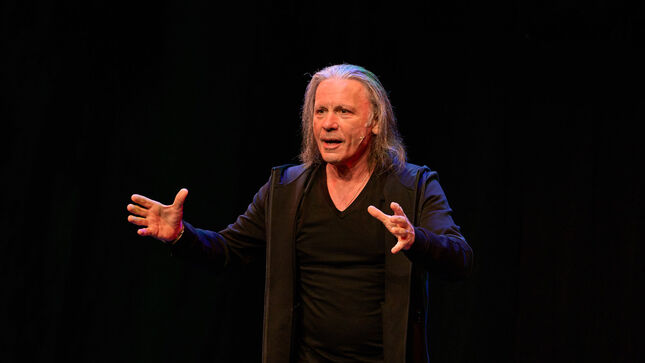 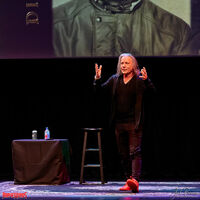 If one were to seek out the quintessential modern-day Renaissance man, we’d need to look no further than legendary Iron Maiden’s front-man Bruce Dickinson. Over the years he has borne an array of accolades that are hard to grasp (it honestly feels like he had lived 9 or 10 lives into a single one): one of the most acclaimed heavy metal vocalists in the history of the genre, commercial pilot and marketing director, olympic level fencer, published novelist, radio DJ, ale brewer, accomplished scriptwriter, military veteran – and of course, a bloody darn incredible entertainer.

His talent as a performer is not constrained to headlining spots at metal festivals, his unmistakable stage presence soaked in the splendor of pyrotechnics and raucous cheers. Undoubtedly his varied life experiences have given him myriad stories to tell, and An Evening With Bruce Dickinson has been the opportunity to hear these anecdotes in the flesh. It is also the occasion to see this artist’s softer, more humorous side as he recounts the fables of his lively and unique life. Some have even been made to wonder if Dickinson missed his true calling as a comedian as he weaves his tales, balancing hyperbole and the impossible with incredible charm.

Rather than a sea of devil horns awaiting him as Dickinson took his tour on its North American debut, he was met with laughter and joyous applause. His current long trek across the United States and Canada began last night (January 17th) in Fort Lauderdale, Florida at Parker Playhouse. Just as with Iron Maiden in all of its pomp and glory, this presentation brought all of the bells and whistles along with it, though in a more subdued than his usual metallic fury. Dickinson took to the stage simply with a large monitor behind him to provide visual aids to his narration, a stool chair, and a stage presence that was truly larger than life. 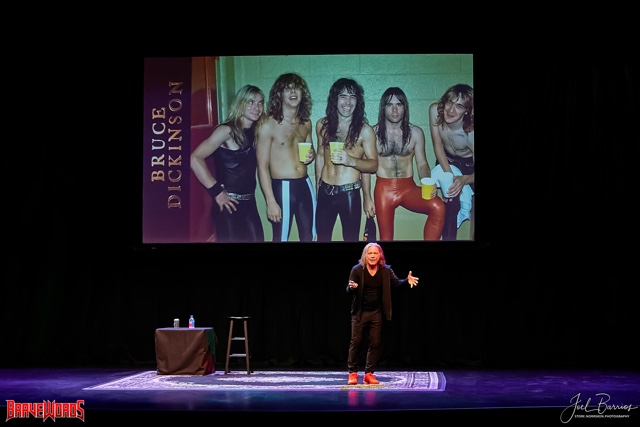 His charisma lit up the room as he told each story, taking the audience through the journey of his vibrant life, starting with his adventures while navigating the strict British school system, getting kicked out after taking a piss in his headmaster’s soup, tricking his teachers to either escape a spanking or to not participate in school activities by pretending he couldn’t sing a single note. Spontaneous laughter and cheers accompanied his amusing recollections, in a trip back memory lane to when he began to dabble with local bands – one coincidentally named “Styx” – ,  how he was offered the singer’ job for Samson and how during the next two years “we did everything that could have been done wrong in the music business, including firing our manager” As the screen showed archival photos of the late 70s, the crowd unanimously applauded when one of Bruce and Maiden’ late drummer Clive Burr appeared.

Delving into his time with Iron Maiden was inevitable, yet Bruce managed to walk through off-beaten path, remembering witty moments of the early days. A couple of my favorite tales of the evening came when he described losing his patience while trying to explain to Nicko McBrain (Iron Maiden’s drummer) some ideas about slowing down his playing in a track, and screaming “Steve!!!” calling for his bandmate’s help in frustration. As the crowd burst in laughs he smiled and added “That’s what God made bass players for!” Gesturing to a collage of him wearing four different trousers in the screen he described how they were made, and went on to divulge how for the photo sessions of his solo album Balls to Picasso he wanted to be photographed in front of a toilet wall:  “There has to be hundreds of cheap toilet in London, yet EMI (the defunct record company) decided to build a 30,000 pound wall inside of the studio for me to lean against for the album photos, that’ probably one of the reasons they went bankrupt!”, he concluded.

Each ounce of humor and drama swelling to reach the story’s climax, and perfectly knowing how to keep the crowd enchanted, Dickinson encouraged even the most stoic of faces split with smiles and mirth. Diving into the more sensitive subjects also appeared to come to him with ease as he spoke on his time in cancer treatment (presenting some images on the screen, in a couple of which his face was barely recognizable) and recounting how he fought his disease by treating as if it was a real, tangible enemy, how he decided to grow a beard during the time he was receiving the radiation treatment, and how – half comically, half scary – such beard literally fell out from his face one day while he was having lunch at a local pub.

Before leaving the stage after the evening’s first segment, Bruce explained him he had planned to do a full-blown theater premiere for the Iron Maiden’s single and video of “The Writing On The Wall” with the surround effects and “all the bells and whistles”, but since at the time Covid-19 halted such plans, he had brought the video with him. At that point the screen was overtaken by the massive animated clip and the hall filled with thunderous audio, a delightful treat to serve as an exhilarating intermission.

The second part of the show proved that Dickinson’s impeccable delivery and a flawless storytelling was not constrained to a pre-planned foray through his past. Holding a list of questions submitted by the audience previous to the show, he fired off answers with smiles and honesty as he ran through a gamut of interests: “Would he ever like to become a chef?” Of his many skills, that’s not one he plans to nurture. “What are his favorite produced Iron Maiden albums and how often he listens to them?” Although he confessed that he doesn’t often go back and listen to them, the magic of “Powerslave” still blows him away. “The superpower of flight or invisibility?” The singer would have his fans know that he would much rather be invisible (assuming that the conditions didn’t involve complete nudity while doing so). “Will Iron Maiden ever play Alexander the Great live” It’s been discussed, and it’ll happen, he assured. “We don’t know exactly when, because some parts are truly challenging, - we don’ know what we were thinking when we wrote it, but we’ll do it”

Bruce didn’t flinch as more serious questions rolled through, taking them with earnest honesty as he discussed his cancer diagnosis and the pain of treatment, not pulling any punches as he detailed his perspective with the disease. The depth of his thought process and clear inquisitiveness gave the vocalist, so famous for one role, so much additional depth. Not just a front-man, but a whole person laying his soul out for all to see. In the moments of greatest empathy with the audience there was pure silence, all in attendance latching on to each and every word.

Punctuated with an undaunted closing a-capella delivery of the first verses of Iron Maiden’s “Revelations”, littered with curses, and overflowing with heart, An Evening with Bruce Dickinson is the opportunity to see the iconic singer in a familiar setting like never before. Not only for Iron Maiden die-hard fans, but simply for those seeking a good story narrated by a man who has achieved and excelled at almost everything imaginable, this is one evening certainly not to be missed.

Last Saturday, January 15, BraveWords presented a very special episode of Streaming For Vengeance, in which Bruce Dickinson joined "Metal" Tim Henderson to talk about his spoken word tour. During the 30-minute video interview, Bruce also revealed that Iron Maiden are officially getting ready behind-the-scenes to hit the road later this year in support their latest album, Senjutsu. As well, he updates us on his forthcoming solo effort that he's working on with long-time partner Roy Z and cracks open the Trooper beer plans for 2022! Watch below: