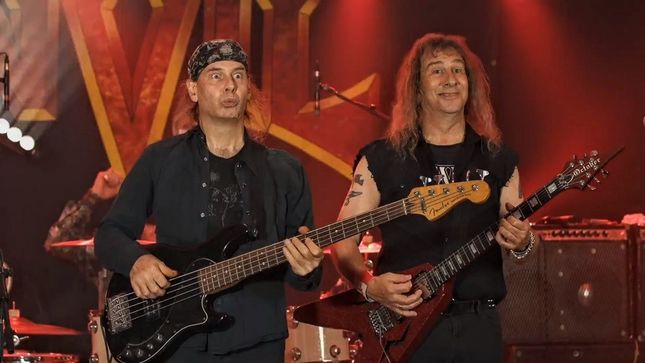 Nice of Canada Day (July 1st) to piggy-back on the celebration of America's Independence Day... any excuse for an extra two-four & a long weekend, eh? Legendary proto-thrash pioneers Anvil opted to join the burgeoning livestream field, performing at L'Anti Bar & Spectacles, in Quebec, on the 4th. First saw them in '82, at the old Cleveland Agora. Touring in support of Metal On Metal (attendees received a free special, promotional stamped: "Tour Edition" vinyl), a handful of fans got to go backstage, afterwards, for autographs and a hang. Never would have envisioned either one of us still at it, almost 40 years later and certainly not being "thrilled" to just watch a show online. But such are the current circumstances, any show is better than none, no matter the transmission medium.

90 minutes, a career spanning retrospective, kicking off with "March Of The Crabs". Frontman/guitarist Lips has always been a bit madcap, pulling faces or a toothy grimace. Never shy, so a live show, where there's no crowd, but a camera, you know where his attention will be focused. From the start, he leaves the stage, to visit the stage front lens, speaking into the guitar's pick-ups. Between songs, there's imitation crowd noise. Blue lights for "666", Chris Robertson could be the human form of the Simpson cartoon's nefarious boss Montgomery Burns. Throughout the show, in addition to backing vocals (and a fair mugging/facial contortionist himself) he seems to perform musical calisthenics, with the bass (left to right, up, down, touch your toes, etc.).Once more, Lips is out front, this time, playing from his knees, but it will be the last time for a while (perhaps the director told him to stay put?). 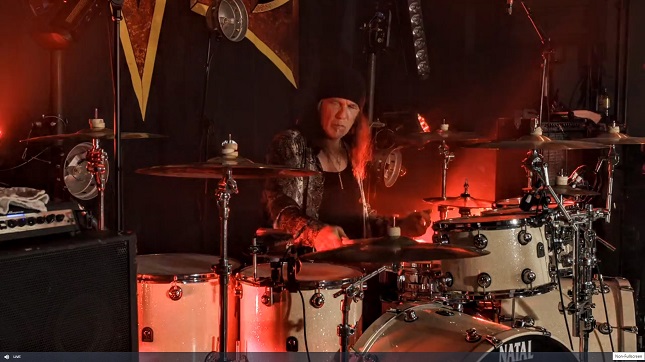 Surprise of the night had to be the inclusion of the mid-tempo sing "Ooh Baby". There are certainly a lot better known tracks off the '81 debut. Afterwards, Lips talks about Chuck Berry and how he placed cameras in the ladies room (at his St. Louis restaurant), saying, "Guess he was looking to share a room with Bill Cosby!" Cue "Badass Rock N Roll", where he briefly adopts an Elvis impersonation and then puts his hands overhead, attempting to get the viewers to clap along. Upon completion, the stage goes completely dark, for a second or two and seemingly on-the-spot Anvil opts for new material (at the bassist's insistence) rather than the old school material, to which Lips had alluded. "An homage to Canada", the pro-marijuana "Legal At Last" (title track from the latest album) was followed by the plodding, autobiographical "Nabbed In Nebraska". 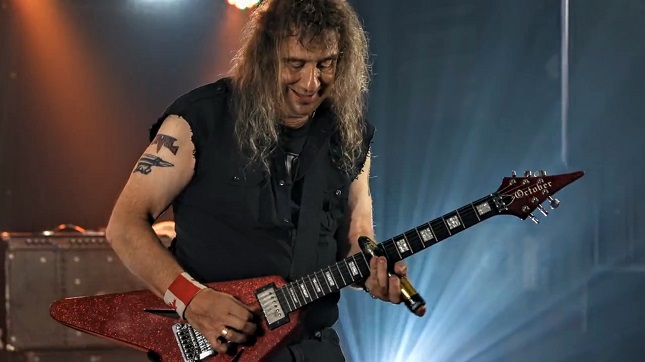 Robertson was introduced, his four-string pounding out the start of "Winged Assassins", as Lips quipped, "This one is about keeping the peace. We could really use that right now!" Green lit "Free As The Wind" was dedicated to Lemmy, the frontman relating the oft told tale of a substance fueled night-off in Birmingham (UK) with the notorious Motörhead legend. During the titular chorus, Lips shows he can still hold those protracted vocal notes. "I love the canned audience," Lips says. "It makes me feel like I'm on a game show or something." Ironically, once "On Fire" is complete, there is no applause (for the first time tonight). Maybe they thought he was taking the piss, but for the remainder of the evening (until the finale), the songs end in silence! 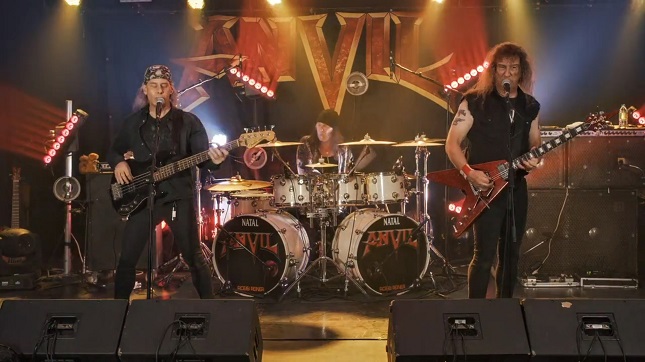 Sustained chord and crash of cymbal begin the staccato stomp of "This Is 13", which affords the musicians a bit of slowed down jamming. It segues into "Mothra", with Lips moving center stage. Does anyone play the bottom of the fretboard (virtually atop the pick-ups) more? The voice is a little raspy on this one, as he's out front, once again, yelling "Hell yeah" into those aforementioned pick-ups. An extended vibrator solo ensues, Lips using his "tool" for hammer-on and as a slide. The ode to car mounted GPS, aka "Bitch In The Box" is up next, then the instrumental "Swing Thing". Lips bills it as (drummer) "Rob Reiner's best moment in the set. The drums are gonna crush your brain." While the understated and overlooked talent behind the skins does get a lengthy workout (the other two actually out-of-sight, off stage), in fact, it provides a showcase for all three members. Close-ups show the guitar strings bending.

Another newbie, before they leave, "I'm Alive”, although from the start, actually triggered my memory as a cover of ‘70s Ted Nugent, until sanity prevailed. The clang of ride cymbal heralds "Metal On Metal" as fists are thrust aloft. Sensing the show's finality, hands overhead, Lips again attempts to get the viewers to clap. Wisely timed to coincide with Saturday night throughout Europe (still their stronghold), even at home (in North America) it was an appetizer for the holiday weekend and until we can rock-out, in-person, that's about as good as it gets.