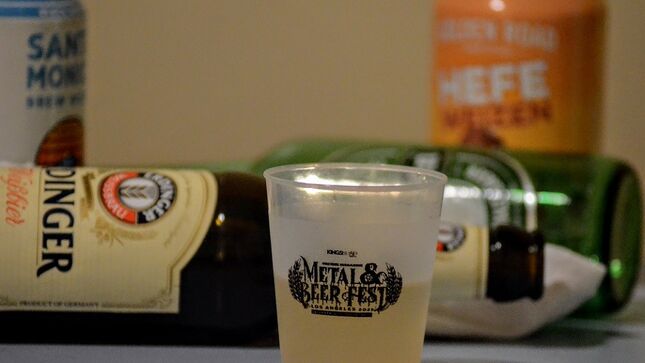 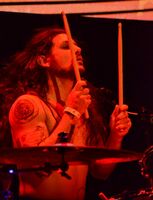 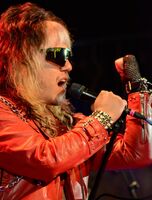 My German friends see the event's title as redundant, laughing at the prospect that a metal festival and beer are not synonymous. Overseas, they are one and the same. While never crossing an ocean, still found myself as far away from my, and Philly based Decibel magazine's homes, albeit the opposite coast. Know some will find it hard to believe, but it was really the musical line-up, not the beer (nor sunny weather, as there was a freeze warning, night of my arrival), that led me to The Belasco, in downtown LA, come early December.

Finding a reasonably priced hotel, within walking distance of the venue, proved a bit of an adventure, ultimately holing up in a quirky establishment that was several decades past its prime. Imagine if Nora Desmond (Sunset Boulevard) lived in The Shining abode! Due to Covid, entry between midnight and 7AM was forbidden (in a major nightlife city?), information not presented until check-in. As friends pointed out, the virus is just as likely to enter during the daylight hours as well, so it's probably due to the lack of hiring overnight staff, but I digress. There's a mask mandate throughout Los Angeles (although once inside The Belasco, many did not heed the rule). Proof of vaccination is required to enter indoor restaurants (not alfresco dinning, nor in the open Grand Central food market). Same piece of paper is needed for rock concerts.

$10-12 to park, all day, in a metropolis, is a godsend, to us Northeast folk. Enjoy. Proliferation of scooters throughout the city makes sense, in a culture raised on surfers and skateboarding. When it comes to the festival, must say that the number of beer vendors and their offerings, overall, were a third, if not a fourth, of those at the Philly event. And many of the same East Coast establishments were reprised on the left coast. Come on, there's HAS to be more micro-breweries out West! As a denizen of the East, tried to prioritize sampling the Left Coast breweries, but unfortunately they were few in number. In fact, the total number showcasing their wares was only in the single digits! Compared to the more establish PA event, the beer aspect almost seemed slapdash: less signage, most vendors didn't really try to advertise/"sell" the public on their product, even when asked (simple inquiries, like ABV, often required the pouring/server to get another member of the partying entourage, behind the table, to come forth). An interesting twist, the inclusion of non-alcoholic (0.05%) entries from Connecticut based Athletic Brewing. Their hazy IPA and now defunct dry hop Brave Noise pale ale are real alternatives for those seeking a tasty sip, without any possible consequences. Similarly, Societe Light Beer at 4,5% is rather heavy!

With time necessary for much needed camaraderie (bands hanging in merch area before/after gigs), was not possible to sample all the beverages in-house, nor was I inclined to over-indulge on things beyond my musical taste. Thus what follows are the highlights of both bands & brands. Come 6 PM, Saber (remember that name!) kicked things off, and in many ways, was the most anticipated band of the evening, even though many of the posh LA "metalheads" couldn't be bothered to show up in time. No worries, as the band's talent and scope transcend LA LA land. Energy, intensity and fun: founding heavy metal principles (yet often forgotten these days), Saber brings it and pull it off live! They deserve to be seen/heard on an international stage, most prominently, Germany (take notice) and probably will be, before long. Proud to say, their set was definitely worth the airfare/hotel expense. 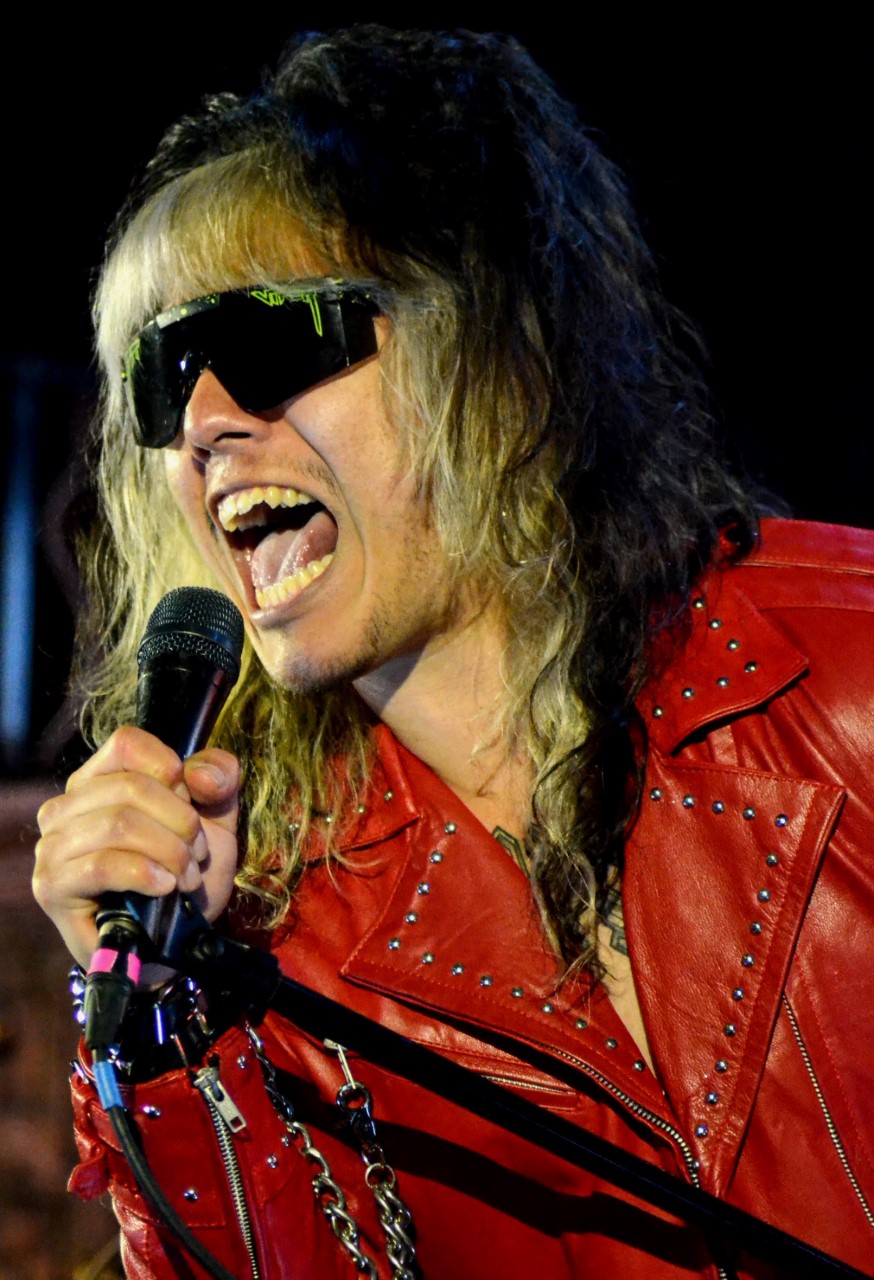 The lead guitarist Joel Dominguez and singer, Steven Villa (small, ornamental spiked mace hanging from his waist), are both stars in waiting. The latter is a visually combination of David Lee Roth and (BulletBoys) Marq Torien, foot on the wedge monitors as he mugs for the cameras down front, yet actively moving about all parts of the stage. Musically, the band is a throwback to the days of the Sunset Strip, with infectious melodies that reference early Mötley Crüe (thumping "We'll Meet Again") and Jake E Lee era Ozzy (speedy "Leather Laced Lady"), but with added, real metal oomph. Opening, like the record, with "Storm Of Steel", it's then on to the title track. If the audience can't/won't reciprocate the onstage energy, no problem. Villa belts out the high notes and the guitarist is afforded a solo spotlight, while the rest of the band, headbanging/hair flailing (often grouped in twos or three) raise their instruments, vertically. Only "Outlaw" was skipped, off their Without Warning debut. You need to hear the power and height reached for the vocal sustain on "Midnight Rider". Their night ends with Villa, shirtless, for "Speed Racer", a no-holds-barred speedster that caps a glorious, but all too short, set. Can't wait to watch them rise. We'll meet again, perhaps overseas.

Found Claremont Craft Ales' 35 Miles an enjoyable drink: hazy IPA, even at 7%, more so than their Buddy, a black double IPA weighing in at 7.4%. So not sure people understand the dynamics. Why show up and buy $16 PBR tall boys versus a couple of (albeit admittedly unknown) "free" shots with the (unlimited samples) beer ticket? That said, come the Night Demon set, initially there were more people hanging in the third tier balcony (no one was checking if entrants had the proper wristband) than were on the floor, watching the band. What's wrong with you people?! Speaking of stepping up your game, time for a big-boy beer. Oogpogo's hefty 10.5% pineapple Yucamama is a hazy triple IPA with sweet after taste. As opposed to the intimate, headlining gig, witnessed in Asheville, NC a month ago, this was a quick, wham-bam set from the Demon: no time for embellishments like cover tunes and of the pandemic released singles, only "Kill The Pain" gets an airing. The rest was the hits, from the Night Demon canon, kicking off with "Screams In The Night". Although from nearby Ventura, it was just the trio's first gig in the city since '18. 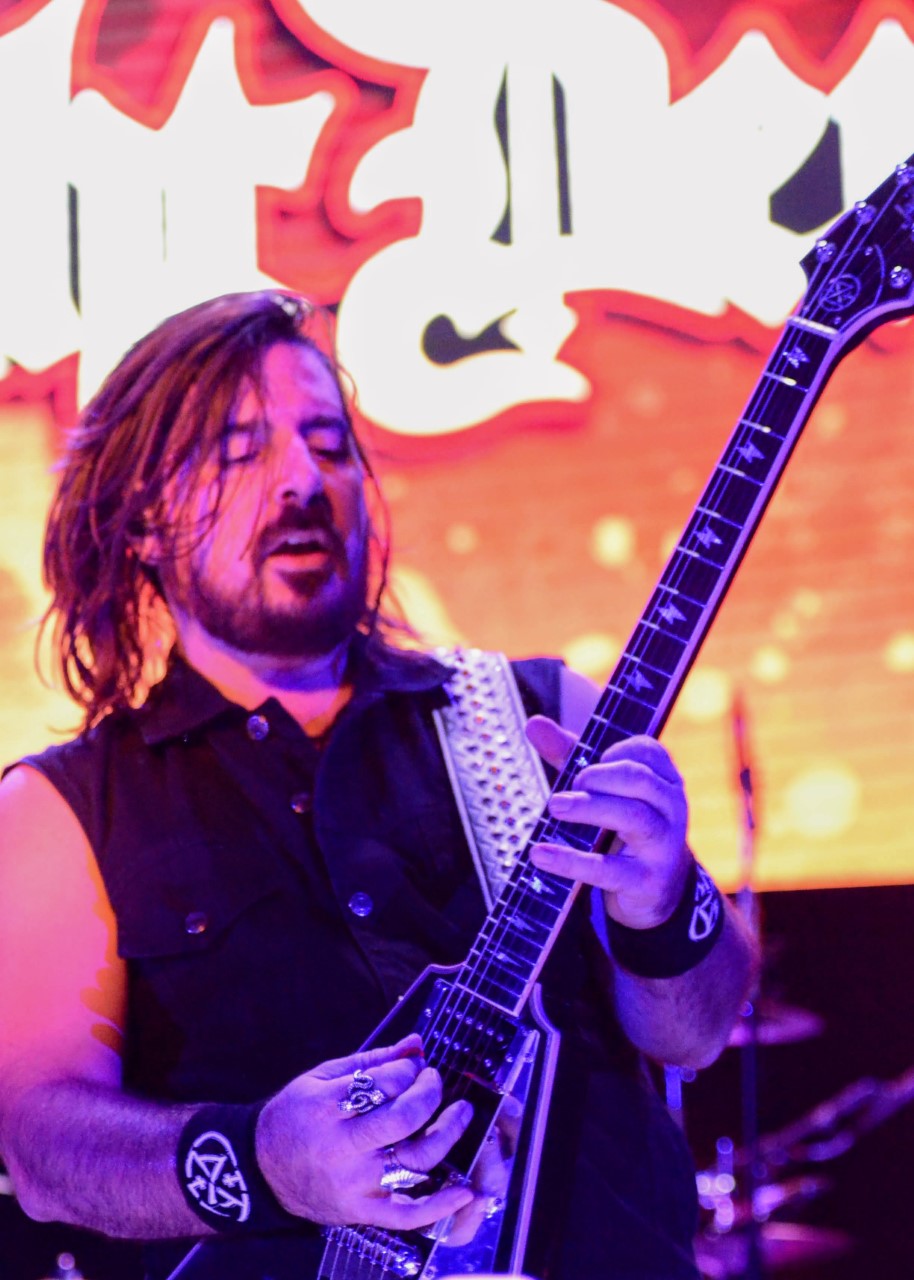 Jarvis Leatherby (bass/vocals) didn't waste much time with small talk either, hammering home one blazing, old school inspired tune, after another. Not only does his new look (Fu Manchu mustache, longer hair) give him a distant resemblance to James Hetfield (check out the photos), but the lengthy coif catches more sweat, and as the night rolls on (even an abbreviated one, like this), stringy strands flop around and are draped across his face, by the end of the performance (makes for better live photos too!). Staccato "Hallowed Ground" and "Ritual" are delivered back-to-back with almost punk-like speed and intensity. The onslaught grabs the attention of the fans, now starting to fill the area in-front of the stage, rather than watching from a distance. Maybe it's the four flights of stairs in-between.

Dusty Squires' drums herald the start of "Dawn Rider", another quick hitter. Then it's time for the appearance of Rocky (aka "The Chalice"). The skeletal mascot lumbers between Armand John Anthony (guitar) and Leatherby, brandishing namesake drinking vessel, much to the delight of the crowd, who shout the "Drink from the chalice!" chorus. As usual, the night draws to a close with their signature track, Jarvis' head on a pivot, ratcheting back and forth in a headbang that would shame men half his age. Unfortunately, there's a long time before our next chance to catch them live: (fingers crossed) a North American run, in the spring. Somewhat aptly, Early Graves were calling it quits, their final show, so bands, friends and new beer discoveries proved a stronger draw. That would include a pair from Oakland's Ghost Town: offering their Numbskull, a 9& red IPA in collaboration with the band Ghoul, who would be onstage tomorrow, and a 6.4% hazy IPA (The Keeper), cloudy/dirty in consistency.

Also tried a red IPA (6.8% War Blood) via Soundgrowler during the intermission. Had planned to shoot OG thrashers Repulsion (having done so previously, at the Philly fest, back in '18), but what seemed like a protracted, between band changeover, especially for just three musicians (standing in the photo pit, waiting and waiting...) opted to return to friends/bands congregating on the patio/merch area, including Bewitcher, who played the Thursday pre-show, but came for an informal, but informative Friday hang, nevertheless. Also time for more cardio, aka Stairmaster to the brewery penthouse in the balcony: Ghost Town west coast IPA (Inhumane, but despite the name, very manageable at 7%). 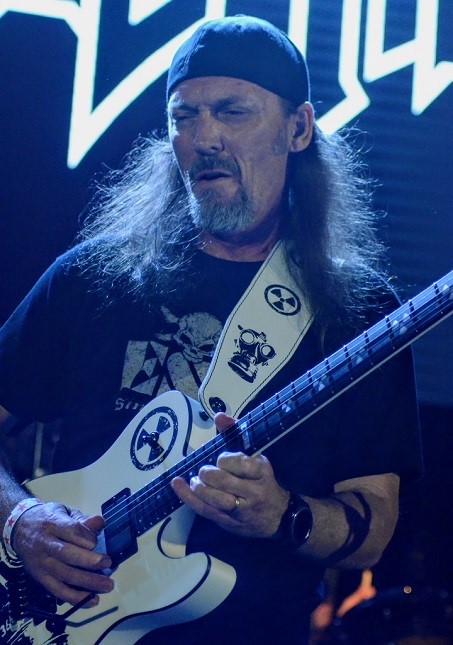 Almost from jump, Sacred Reich was the first band to actually engage the crowd. Outspoken frontman/bassist Phil Rind announcing "Start the pit!" practically from the opening of "The American Way", which was followed by "Independent". Come "Divide & Conquer", early in the ten song set, moshers were on the floor, in full force. Nice to see people actively engaged in the show, rather than capturing (or live streaming) it, on their phones. As the night wore on, smart to downshift from the hi-test choices. Difficult to find, since they're few in number, but settled on Illinois based Wake Brewing's smooth 4.5% Boiled Over Lager (which is actually a collaboration with the band Gatekeeper). Over the last couple of pre-pandemic years, had seen the Arizonians at various Euro festivals as well as (with Night Demon), in Karlsruhe, Germany, December, 2019. So tonight, didn't watch the set, start-to-finish, splitting time between saying goodbyes, a last liquid sample, or two, and classic thrashers. It was an almost 50-50 mix of nostalgic hits and their most recent album, 2019's Awakening. After "Ignorance", intermittently popped back to the ballroom, witnessing "Love...Hate", and then the concluding run of "One Nation", "Awakening", "Death Squad" and "Surf Nicaragua". In a divided political nation, these pointed anthems (prophetic at the time) ring truer than ever.

Cheers to Decibel's efforts. See you in 2022, albeit probably closer to home.