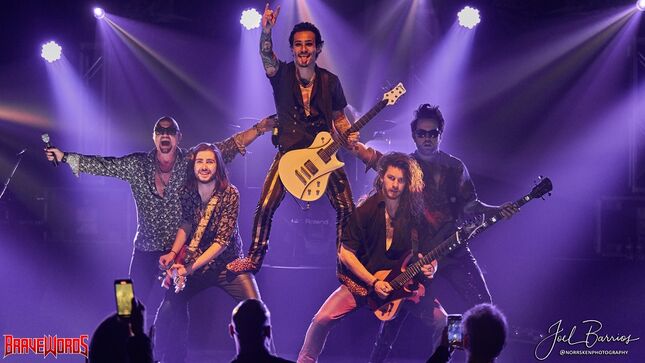 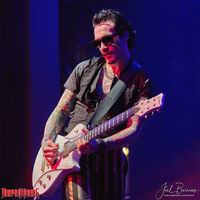 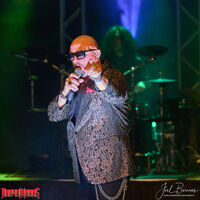 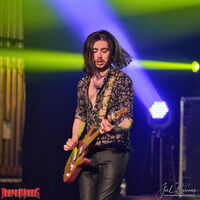 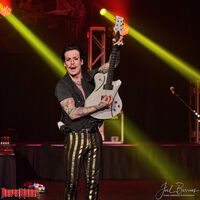 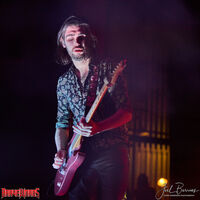 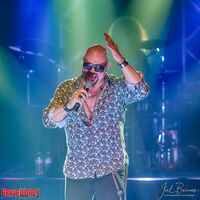 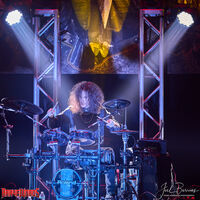 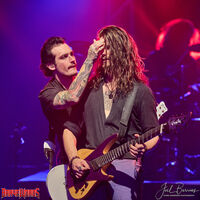 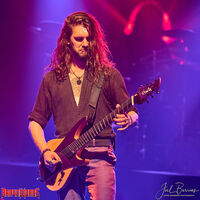 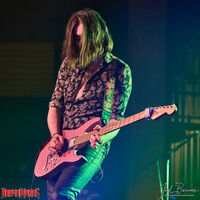 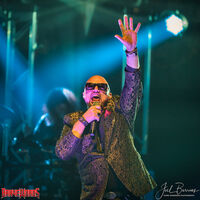 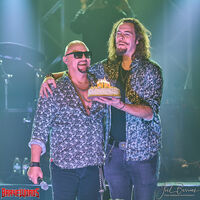 It is said that with age comes wisdom, but in the case of former Queensrÿche front-man and highly prolific solo artist Geoff Tate, the onset of his late 60s has brought a newfound drive in the concert setting that has been paying massive dividends for the past month and a half. Riding high on his Big Rock Show Hits tour since December 1, Tate and the rest of his international seven-piece touring band would bring their A-game to the Florida masses gathered at Fort Lauderdale’s state-of-the-art sounding Amaturo Theater on this past January 14, making his 64th year on this earth and more than 40 years delivering his unique vocal persona to the metal faithful. Though only a few years ago this Seattle native turned superstar seemed amenable to the idea of retirement, and despite his recent heart-surgery, there were zero signs of slowing down from this iconic impresario as he tore through one certified classic after another, covering nearly every era of Queensrÿche through a grueling two-tour set. 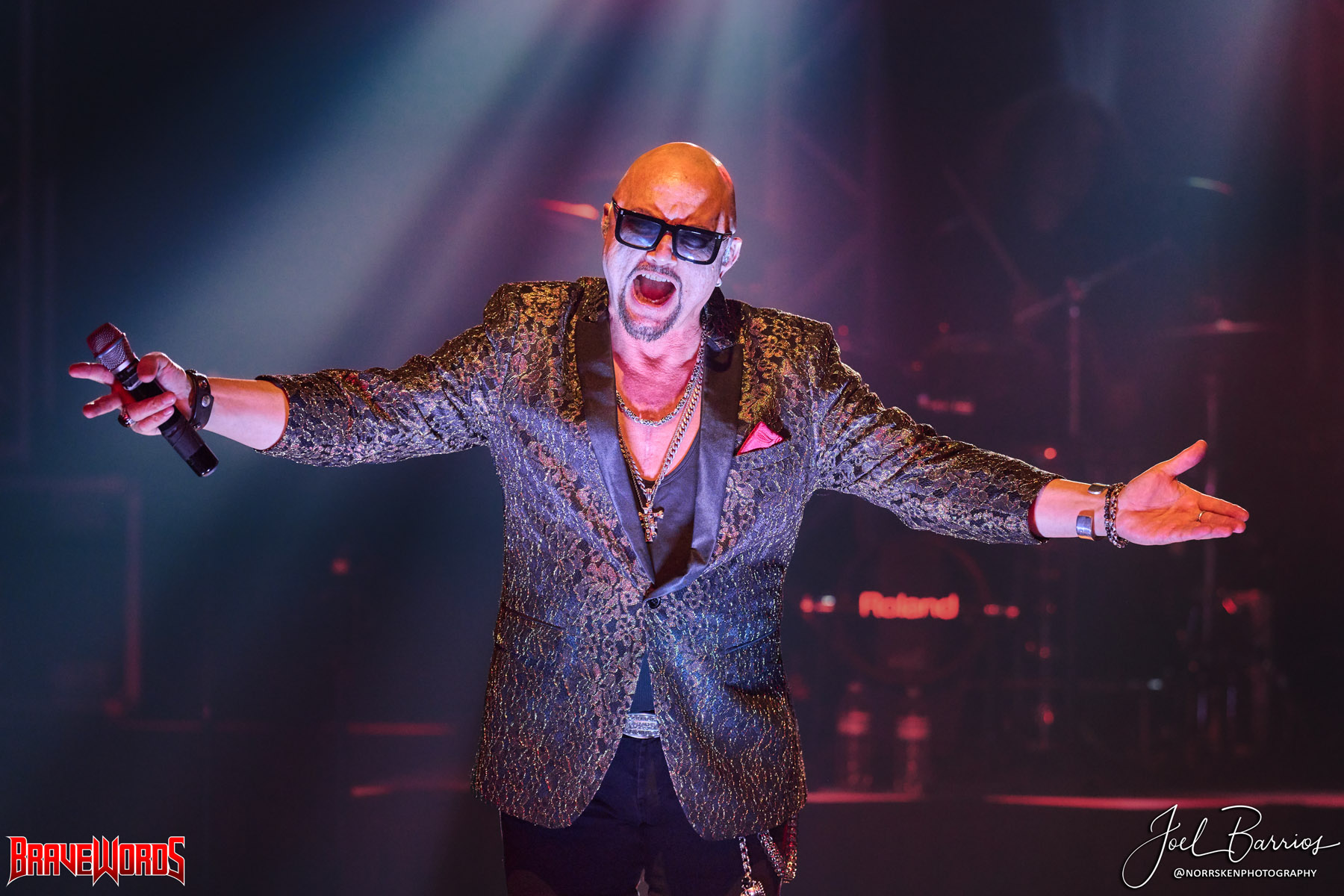 Hitting the stage with dusk hanging in the sky above the indoor venue seating roughly 600, Tate and company wasted little time in drawing a rousing respond from all in attendance. A highly cinematic intro featuring a sea of symphonic ambience and some haunting piano work courtesy of touring keyboardist Jason Ames would mark the band’s entry amid a ballet of moving stage lights. The fullness of the arrangement would become palpable immediately courtesy of the three-guitar ensemble consisting of Scottish six-stringer Kieran Robertson, Ireland’s own James Brown and Bostonian Alex Hart, with the super-tight rhythm section provided by bassist Jack Ross and drummer Danny Laverde, producing a sound all but identical to the colossal and highly polished one that graced Queensrÿche’s celebrated magnum opus “Empire.” In what can be described as a riveting opening to a grand spectacle, a massive one-two punch of the aforementioned album’s title track and infectious power ballad “Another Rainy Night (Without You)” kicked things off as masterfully as if Geoff’s former band were headlining an arena back in 1991. 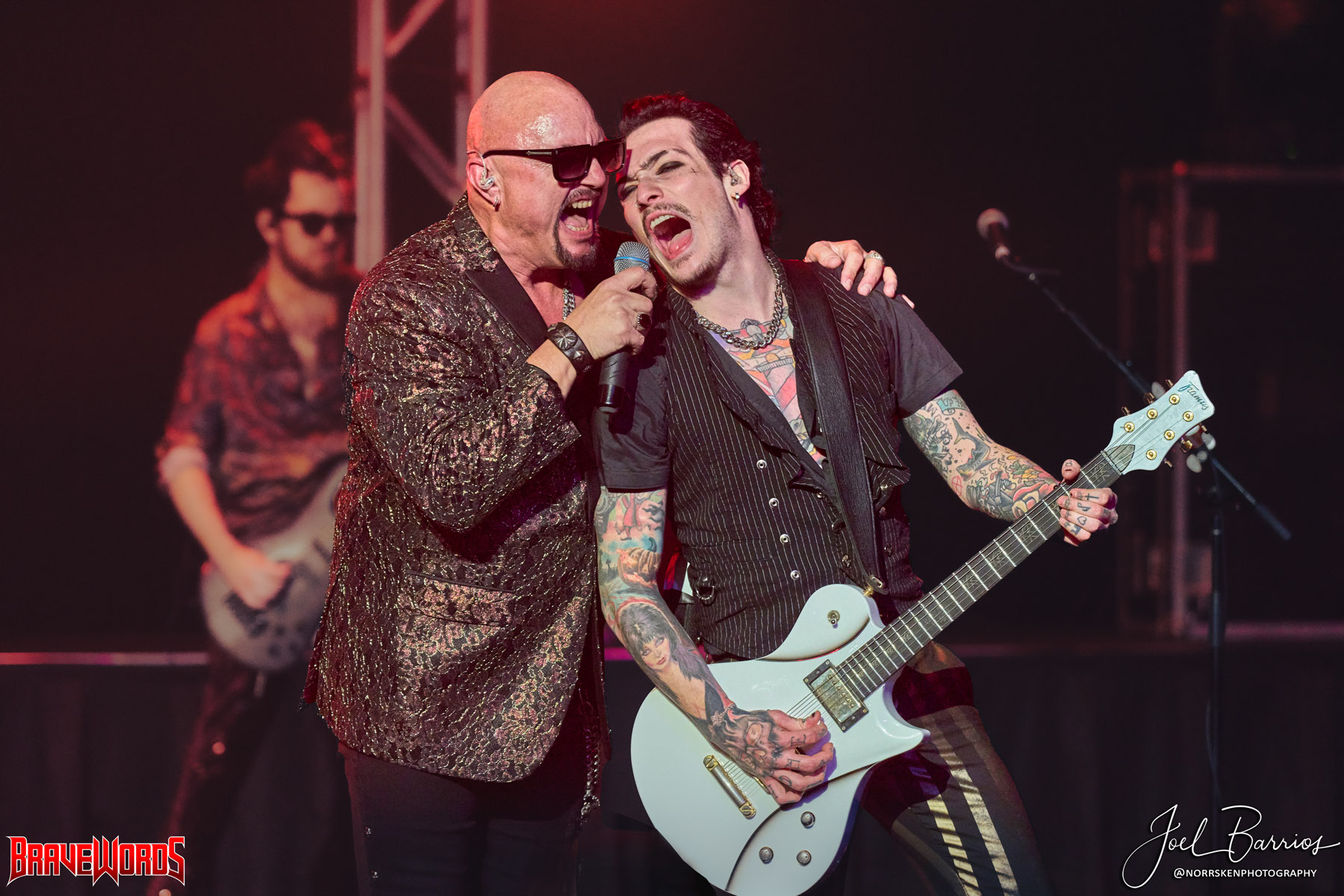 Barely a stone in Tate’s extensive career was left unturned as the show progressed, presenting certified classics in a clustered, non-chronological order that proved highly methodical in terms of pacing and general flow. The most heavily represented era would natural be that of Queensrÿche’s commercial breakthrough and foray into the changing musical landscape of the early ‘90s Empire, with powerful renditions of “Best I Can” and “Jet City Woman” eliciting heavy cheers from the venue’s entire complement, while a heartfelt performance of smash hit and ballad “Silent Lucidity” would adorn the tail-end of the primary set, and showcase an aged Tate coming off as a fine wine as he seamlessly transitioned from his signature high-ranged theatrics to a subdued, deep-ended yet highly dynamic bass baritone. But despite his advanced years, this metal god with a progressive edge was no less averse in covering the insane vocal gymnastics that marked his early career via classics “Screaming In Digital” and “Walk In The Shadows” off 1986’s “Rage For Order” and 1984 hit “Take Hold Of The Flame” off “The Warning,” the latter two songs seeing Tate still capable of nailing crazy high notes. 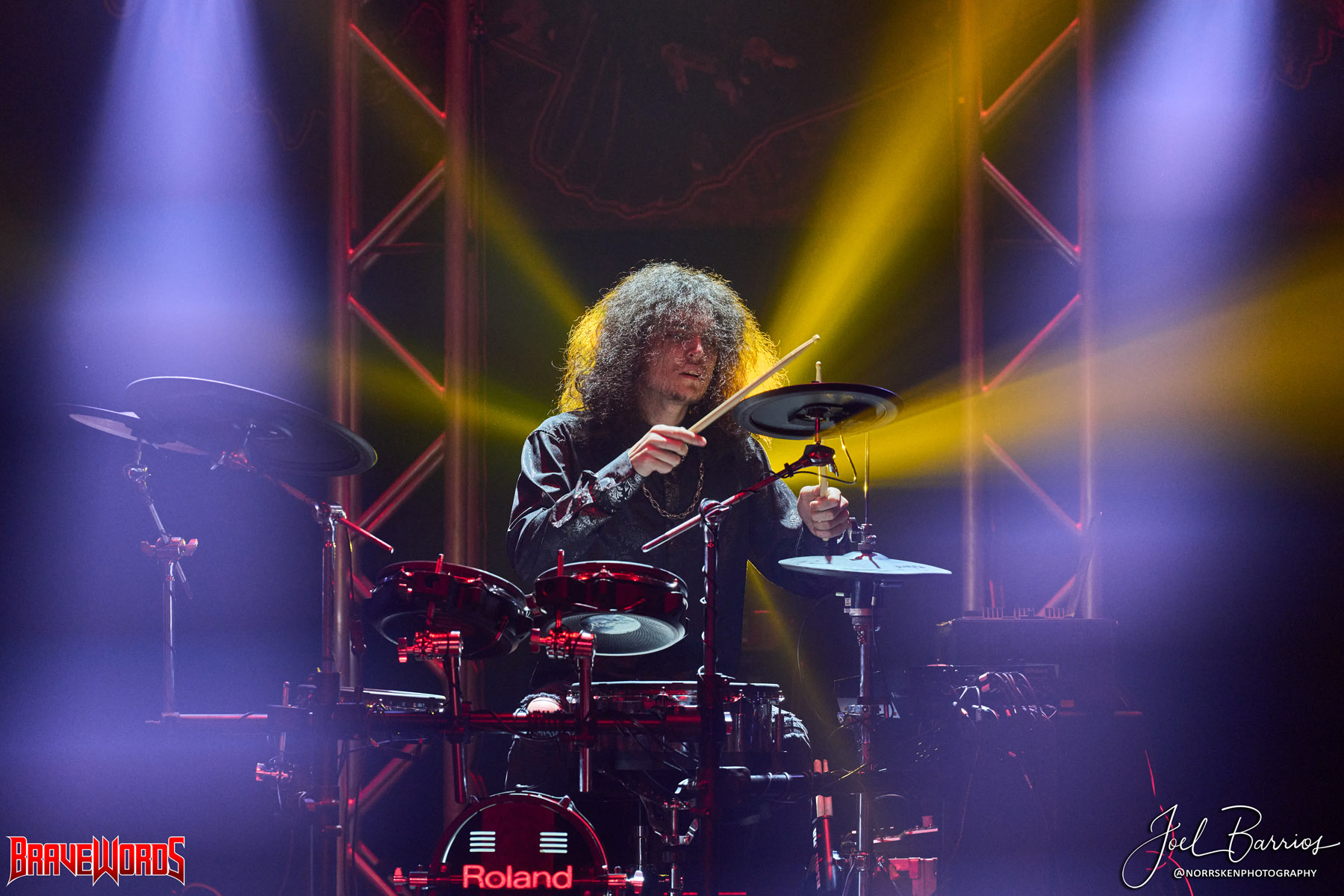 Though it was fairly clear that the decibel level of the crowd response was at its zenith during this fold’s performances of Queensrÿche’s ‘80s material, they did not shy away from getting some cheers from the latter day entries of Tate’s run with said outfit. Groovy mid-paced numbers like “Sacred Ground” off 1999’s “Q2K,” “Desert Dance” off 2003’s “Tribe” and especially the haunting nuance of “I Am I” off “Promised Land” marked the highlights of what is often considered a black hole in Tate’s career, and the singer himself made a humorous jab at this eventuality in the form of an anecdote about an encounter he had with a fan at a gas station who had no idea he’d put out any music since “Empire.” Suffice it to say, the songs themselves brought their own sense of nostalgia, sharing a sort of melodic mystique that seemed appropriate to their era, yet also were presented in a heavier and more animated fashion that transcended their original studio versions. Likewise, an especially poignant chord would be struck following a surprise performance of “Last Action Hero” soundtrack entry “Real World” as Tate recounted Queensrÿche’s extensive collaboration with composer and arranger Michael Kamen, whom sadly passed in 2003. 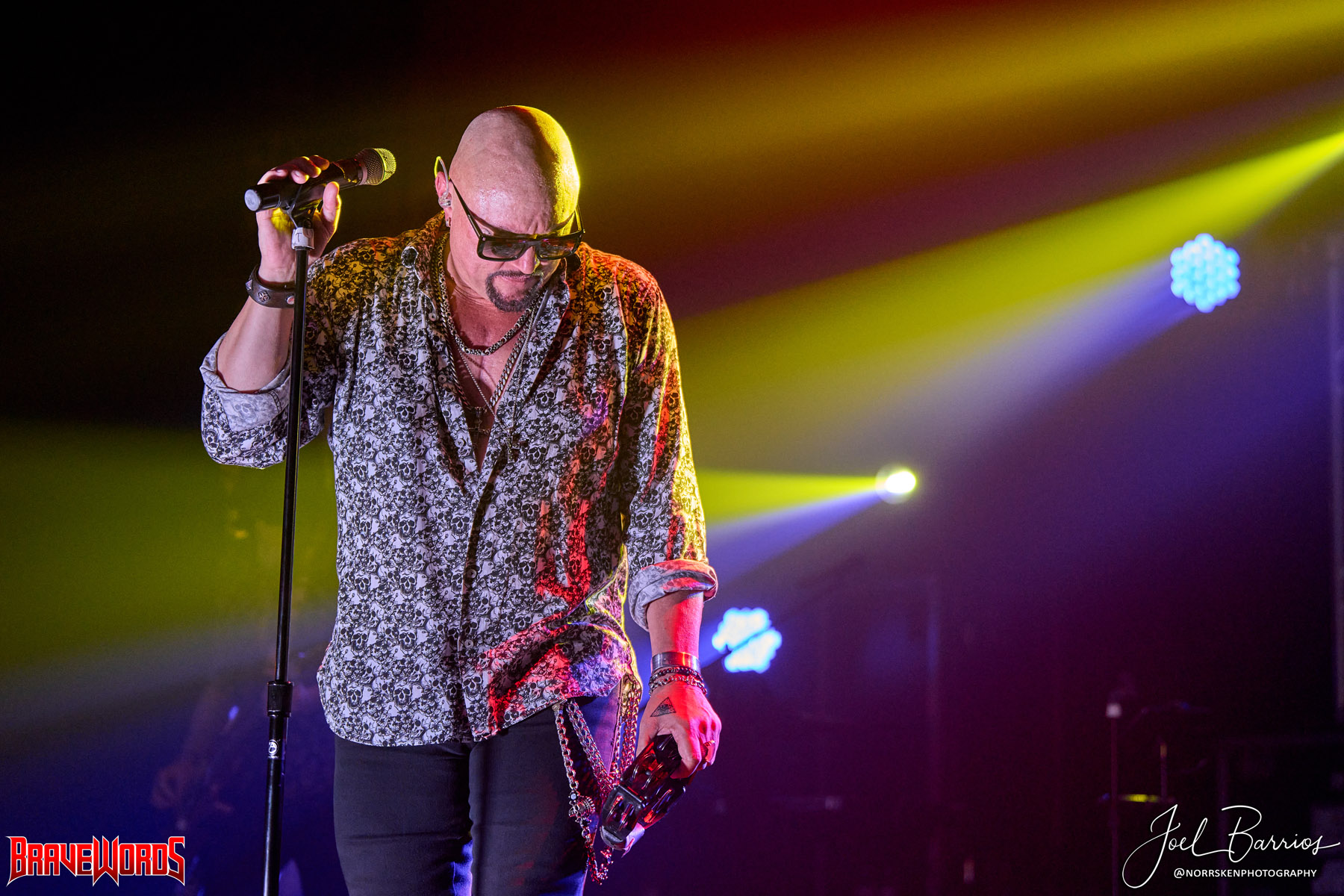 It goes without saying that the performance that had graced this Florida evening was, in many ways, a typical exercise in excellence by one of the best voices in the business, but that’s akin to seeing something typical in the habitually atypical. Indeed, for a man that many might suggest is in the twilight of his career as a live performer, Tate seemed to scoff at the suggestion with every note, particularly when delivering a stellar showing on the classic “Operation: Mindcrime” trifecta of “Breaking The Silence”, “I Don’t Believe In Love” and “Suite Sister Mary”, the latter of which had not been heard prior on the current tour and functioned as the climactic point of the evening if crowd response was any indication. Then again, following another poignant moment where the audience joined in wishing Tate a happy birthday, complete with a cake being presented to him on stage, the fire seemed to burn even brighter as Tate soared into the proverbial stratosphere to the metallic fury of the band’s 1983 breakout anthem “Queen Of The Reich”, concluding what was sure to have been among the strongest showings of his latter day career. Time may well continue to march on, but it’s a foregone conclusion that retirement will remain an alien concept to this heavy metal mainstay. 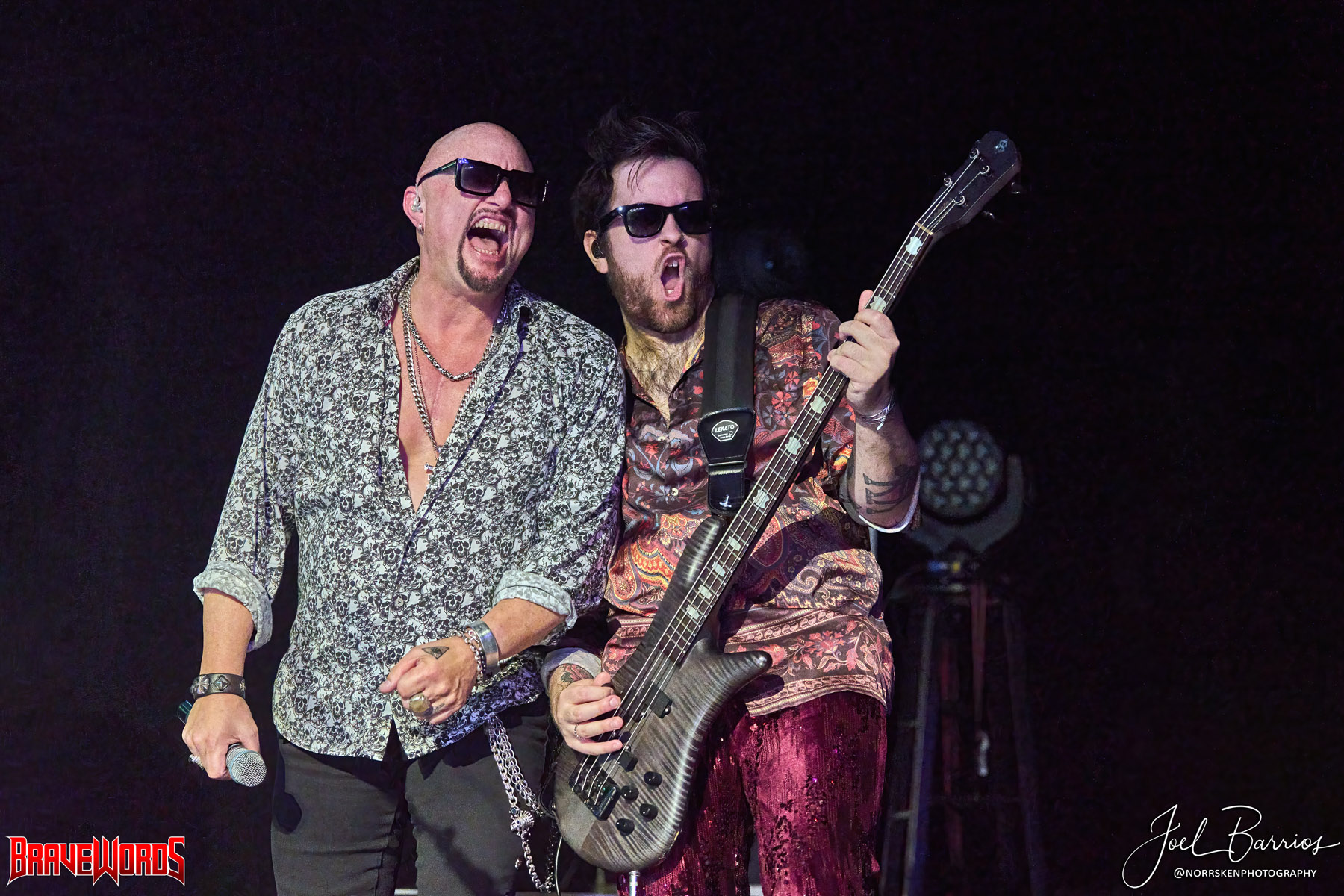