GHOST Scares Up a Hell-Raising Performance in Cincinnati 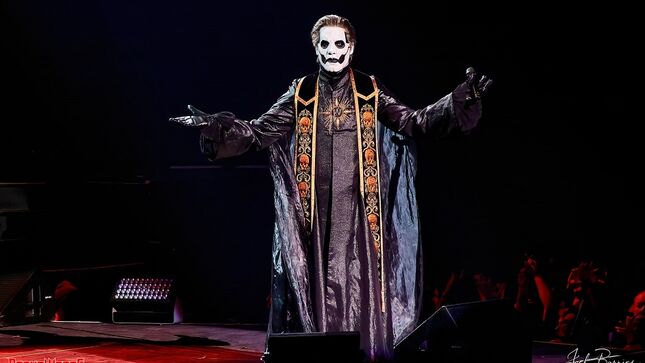 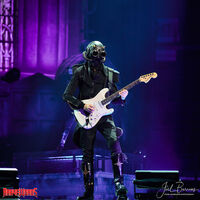 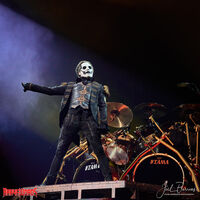 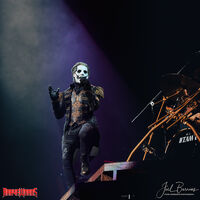 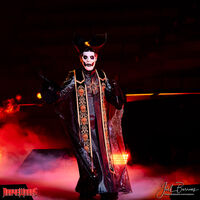 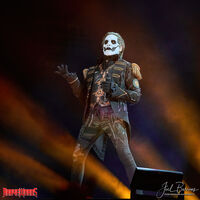 What the hell am I doing here?

It’s an obvious question for a Protestant pastor who has ventured into the belly of the beast (Cincinnati’s Heritage Bank Center) to witness the performance that is Ghost.

What the hell am I doing, experiencing a band that espouses religious hatred, Satanic freedom, a bit of blasphemy and a touch of the risqué (all with a blasting rock framework)?

It’s a question for the ages, posed on a cold Saturday night in February. And I’ll give you an answer.

But first, let’s talk about the show. It was brief, only about 75 minutes in 16 songs. There were no ballads, just crunching rockers. It wasn’t really metal, not with Ghost’s preferred blend of hard rock, punk, power pop and prog (and a few other things tossed in). It was punchy and powerful and the perfect vehicle for the human named Tobias Forge, the man who is Ghost—it’s his brainchild, his project, as he writes the songs and lyrics, designs the costumes and makeup, handles a bit of choreography, and probably helps sweep up after the shows.

It was not a concert to plug “Impera,” the new album which comes out on March 11. The band played just three cuts from it; the rest were more-or-less greatest hits. Yes, Papa’s got a brand new bag—but he’s not publicly emptying the contents quite yet.

But this was all Ghost. When the lights went down, the band was behind a white curtain, silhouetted as they cranked into the opening from Impera: “Imperium” and “Kaisarion.” The curtain arose and Papa Emeritus IV (the aforementioned Mr. Forge) swept out, spinning a tale from ancient times about a brilliant mathematician/philosopher who was murdered by a Christian mob. It also alluded to modern religious intolerance—and did so with exploding guitars and a huge beat. The crowd roared, whether the song was familiar or not. The din didn’t stop until the end of the concert (which had no encores, interestingly enough).

Then it was on to the known and cherished: “Rats” (with crowd shout along). “From the Pinnacle to the Pit.” “Mary on a Cross” (the most recent pre-Impera cut). “Devil Church.” The Grammy Award-winning “Cirice.” And more.

The seven-person Nameless Ghoul orchestra was precise, loud, super-coordinated and energized beyond 10. Wearing coordinated outfits of something of a combined deep sea diving helmet/gas mask and military duds, they did their musical duties. And it was powerful—it had to be when you’ve got three guitars, two keyboards, a bass and a drummer (with many singing background). The guitarists in particular moved around the huge stage, alternately doing rock star poses and then short comic bits (one guitarist pushed another to finish a long, drawn out note that seemed endless). Papa couldn’t do his thing without the Ghouls (even if they are replaceable).

Yet Il Papa, the painted and wildly garbed front-man/emcee/lead singer with more costume changes than a Cher concert, was the focal point. He strode across the stage, side to side and front to back, as a man in control over everything. Charisma? Beyond belief. Funny? Definitely. A talented vocalist? Check.

But Papa was also in check, his stage patter seriously curtailed in an effort to cram as many songs in as possible. And for the uninitiated, especially those who have heard of Ghost through rumor and innuendo: there were no commands to slaughter children or to give the finger to God. No orders to drink blood, or worship Satan, or practice black magic (unlike one of the opening acts). And no suggestions that we give in to the Dark One and his temptations, allowing us to have whatever we want even if it’s at someone else’s expense. Indeed, at one point, the pit crowd was pushing too hard to get close to Papa, threatening to hurt the folks at the front. Papa—very gently and kindly—asked the audience to be considerate, to pull back a bit, to allow everyone to enjoy the show. They complied. This was Tobias allowing us, ever so briefly, to see and hear the man behind the mask. The real McCoy has his own power of grace, one used to the common good.

More on that later.

To my ears, the more recent/upcoming songs are the synthesis of Tobias Forge’s work in Ghost, and that was confirmed in concert. Those selections packed a lot into a relatively short song package—music like “Hunter’s Moon,” which was in the movie Halloween Kills and will be on the new album. Or the band’s unique take on the Metallica classic “Enter Sandman,” part of the finale trinity of “Dance Macabre” and the power closer Square Hammer. These pieces have huge hooks, great breaks, blasting guitars, singalong sections and the big beat that you can dance to; the audience loved them, and deservedly.

Heck, I’ll go ahead and say it: they are singles.

It’s not that the older songs lacked anything or were tepidly received. “Mummy Dust.” “Faith.” “Ritual.” All great. But Papa and the minions are moving on to something greater, something truly Ghost-like. I think future, full-length shows (and I predict that there will be many) will demonstrate that. This is a project that has not yet reached the pinnacle (or the pit, to be punny about it). I believe bigger and better is in store for Ghost. I’m guessing that the Cincinnati crowd agrees.

Again I ask—what the hell was I doing here, a man of God among the godless?

In part, I was looking for answers about this band and this guy Forge. And I got some. Prior to the public display, while the opening acts were blasting away, I and a hundred or so of my closest fiends—er, friends—were led into the very bowels of the building. And there, the man behind the curtain, Papa Emeritus IV. I wasn’t sure exactly what to expect (other than that we’d have a photo taken). I needn’t have worried.

Papa greeted me warmly—and I mean genuine warmth. He thanked me for coming and hoped that I’d enjoy the concert. I used the encounter to make the big reveal: that I was a pastor who was intrigued by so much of this Ghostly project. The hooks. The lyrics. The persona. The whole package. The grand ghoul seemed a little taken aback when I told him of my calling—but he again expressed gratitude for my attendance and prayed (well, not literally) that I’d be pleased with the show.

I used the opportunity to hint that I’d like to do an interview with him, talking about faith and religion and lyrics and rock and roll. He said he’d like that as well and hoped we’d speak soon. I almost felt like we should bless each other as the brief encounter came to a close.

I was—and am—impressed. Now how could I give this guy and his band a bad review?

The answer is I couldn’t. Not because of my impression of Papa (Tobias Forge) as a person, but because the group put on a helluva show. The fires burned hot and singed everybody. I’ll bet the crowd see Ghost again. I’ll probably be there as well.

And when/if I ask myself, “What the hell am I doing here?”, I think I’ll have a more definitive answer. Drinking in the power of a band at its peak. Being grabbed by so many musical hooks. Marveling at the newest papa or cardinal character and his ability to command people while providing incredible entertainment. Realizing that much that is said about Ghost is either exaggeration or just plain wrong. Knowing that the image is just that—similar to that of Alice Cooper, King Diamond, even Kiss. Blasphemous? Yes, to some degree. Offensive? To various groups, of course. Controversial? Absolutely, intentionally.