MERCYFUL FATE / KREATOR - A Night Of Heaviness In Montreal! 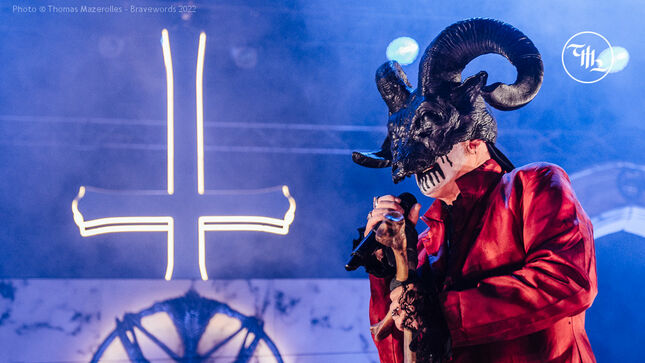 For all the old-school metal fans, the Place Bell in Laval was the place to be on Remembrance Day as it would be the only Canadian date to see Mercyful Fate in concert for the first time in over two decades. For the occasion, they were accompanied by Kreator and Midnight.

The weird thing about this show was that it was a seated floor, not general admission and I must say that it frustrated many people as soon as the tickets were on sale. That being said, fans filled the floor and the lower balcony but the place felt very empty when Midnight got on stage. The trio is a high energy band and they gave a dynamic and very loud performance like only they can do. They got a few fans going as many were discovering their music. Their short set was well received by most and they warmed up the place nicely for the next bands.

Kreator is very popular in Montreal, or should I say Laval, since the show is just north of the river. You could see that the Place bell was filling up as the band got on stage while "The Patriarch" was playing in the background. Even if they have a new album, the band only played "Hate Über Alles" and "Strongest Of The Strong" from it and played all of their other hits instead of focusing on their latest opus. Mille Petrozza was fired up but seemed a little tired compared to newcomer Frédéric Leclercq on bass who overflowing with energy. The Frenchman does not hesitate to interact with his cousins in French and that really pleased the crowd. The backdrop illustrates the cover art of their most recent album and they also have impaled and hung mannequins on each side of the stage. The lights are also used to perfection to showcase the musicians and create the right mood for each song. Again, the fact that it was a seated floor felt wrong for the fans as well as for the band. Mille was taken by surprise and could clearly not request his usual wall of death, but asked the crowd to headbang like there was no tomorrow instead. One thing is certain, the Kreator will return next year as headliners in a proper environment so fans will be able to have as much fun as they want in the mosh pit. Their show ended with the usual "Flag Of Hate" and "Pleasure To Kill". The band is always on top of their game when the play here and fans were enjoying every second of their set.

It was now the time that everyone was waiting for, it was the time to see Mercyful Fate on stage once again! Since their last tour was in 1999, it was probably the first time that most of the fans were seeing them and we could feel the excitement. They could not believe that they were going to see King Diamond front Mercyful Fate once again after all these years. Goosebumps appeared as soon at the introduction of ‘The Oath’ started and once the front curtain dropped, we could see King Diamond atop of the band’s double-tier stage. This setup is very reminiscent of the one used recently by King Diamond on tour but it had new things like an illuminated upside down cross in the background and a huge devil’s sign. King is accompanied by Hank Shermann (guitar), Mike Wead (guitar), Bjarne T. Holm (drums) and since Joey Vera is out on the road celebrating Armored Saint’s 40th anniversary, Becky Baldwin is playing bass for this tour. "A Corpse Without Soul" followed and we could see that the band was firing on all cylinders. The sound was perfect and the musicians were very dynamic. "The Jackal Of Salzburg" was the only new song that was played and it should appear on their new album next year. But besides that, all the other songs were from their first two albums and from their self-titled EP. Fans were singing along with King Diamond, and we could feel the electricity in the air. The cascade of hits that followed was amazing. "Curse Of The Pharaohs", "A Dangerous Meeting", "Doomed By the Living Dead", and "Melissa". For the younger crowd that only saw King Diamond with his solo band, this show is a little more stripped down and more to the point, there are no interludes, no props and no characters, just the musicians and the music. But I have to say that the music does all the talking and besides the eternal goosebumps, we could see tear of joy in the eyes on the faces of older fans!

Towards the end, fans on the floor started to gather in the aisles closer to the front and tried to get up front and fully enjoy songs like "Black Funeral", "Evil" and "Come To The Sabbath" and they gave the security crew a run for their money. Again, this show should have been conceived with a general admission floor, like almost all the other shows of this tour except one or two. I think that the simple fact that the floor was seated, added fuel to a very volatile crowd that simply wanted to enjoy every second of this amazing performance.

The band came back with the 11-minute song "Satan's Fall" as an encore and that was the end of the show. We could hear the crowd chant "Mercyful, Mercyful, Mercyful", but that was all for the night. We could clearly see many groups of fans talking to each other after the show and they were all unanimous, this was an awesome show and you had to be there. We can only hope that we will not have to wait another 23 years to see them again in concert!