RAVEN - Mad & Wiped Out, But Never Felt So Good! 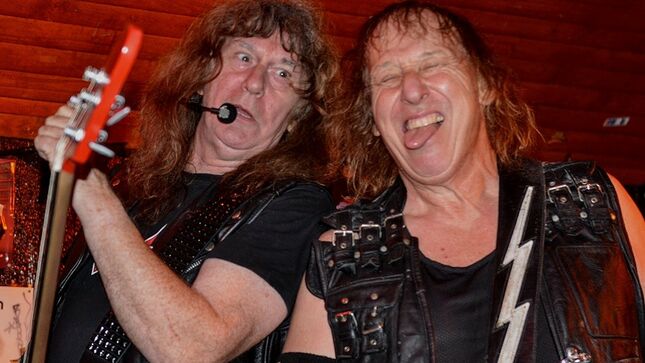 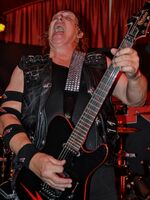 Can it really be 40 years? Damn, we all still look/feel so young! Shoehorned into Kung Fu Necktie, a mix of old school (accent on OLD, felt like a jailbreak from the old folks home, with most of the crowd north of 60) and a few curious second/third generation fans came out to witness a live play-through of the classic Wiped Out album. Some of us grew up on the Neat Records imports, praying one day we'd get a chance to see/hear the band live. Although the brothers Gallagher (John, on bass and vocals, Mark on guitar) emigrated to the States decades ago, the opportunity to witness the sophomore effort (released back in '82) en masse, was a dream come true. Riot Act, featuring guitarist Rick Ventura (who played on the Riot albums from Narita through Born In America) opened. A one guitar foursome, the music is mostly Guy Speranza era material (plus a couple of new compositions). In 2022 never thought I'd hear the likes of "Don't Hold Back" and "Altar Of The King" by a cover band, let alone one of their creators!

Ten people or 10,000 (seen both), Raven deliver with the same intensity, every night. Anywhere, anytime, just wind 'em up, step back and let them go. They plug in and play, regardless, and not too many ‘80s musicians can claim to have the same hairstyle (hair at all?) like John Gallagher. The small stage works wonders between the brothers, starting with rather mid-paced (by comparison) "Take Control", which also affords them the opportunity to check the levels/mix erupting from their amps. John has the headband mounted bar mic, so as to wander about. Mark still has the lightning bolt guitar strap and well-worn catcher shin pads (relics from the Athletic Rock heyday), now gaffer taped to his legs, the elastics long since having given up the ghost. Down his right arm, from bicep to wrist, there's a quartet of black sweatbands. "Hell Patrol" ends with ritual crash of strings-on-strings crossed guitar/bass. Prior to showcasing Wiped Out, there are a few appetizers (as John called them), including a pair off the Metal City record, beginning with "The Power", where his falsetto wail is prominent. Sort of surprised they didn't do anything off the just issued Leave 'Em Bleeding. "Top Of The Mountain" starts with Mark, center stage, tongue waggling. Song gives him the first opportunity to go off on a histrionic guitar run/solo. If there's one thing the man loves more than pulling funny faces, it's torturing the six-string to make all sorts of ungodly noise. "Rock Until You Drop", complete with call & response audience participation, come the titular chorus, is a popular number in the band's hierarchy, but still not the over-the-top Raven immortalized on Wiped Out. Sweat plastering his hair to his face, despite the violent gesticulations as he plays, Mark's solo leads into that sophomore album, as John headbangs, then lifts his bass overhead, backwards.

Straight into "Faster Than The Speed Of Light", no fanfare. There's an almost boogie groove to "Bring The Hammer Down", most atypical musical territory, but somehow it works live. It starts with John leading a clap-off and the cadence just continues. "Fire Power" sees John sustain the vocal high notes, come the chorus. He claims, "In '82, we were ahead of the curve, all the bullshit (news) media," as he introduces "Read All About It" and demanding the crowd offer up the line, on cue: "What's in the news, read all about it." The Gallaghers don't just play, they compete, jousting for stage room and running into one another, especially Mark, leaning on his brother. Wonder if he's every injured John, with a playful, albeit overzealous, romping. As close as any co-vocal approach as there is in the Raven repertoire, "To The Limit/To The Top" sees Mark once again at the front edge of the stage. John got everyone to punch the air during "Live At The Inferno". The interlude between tracks sees Mark go off, leading to the falsetto happy "Star War". The next stretch of Wiped Out offers deep cuts, which the bassist/singer claimed they'd never performed live, prior to this tour. Speaking of which, the band has started their own bootleg series. Each tour will offer a vintage performance (remixed/remastered and pressed on CD) available solely from the merch booth at Raven concerts. They're now hawking Volume #1, a Detroit appearance (at Harpos) on the Stay Hard run, back in '85.

"UXB" the shorthand for post-WWII warning signs denoting "unexploded bomb," is another chance for Mark to explode, a quick hitting dose of speed, plus a gallop of drums. The concluding trio is just bedlam, starting with "Hold Back The Fire", as John shrieks like a man possessed and Mark cranks his guitar. "Chainsaw" is more of the same, if only more manic, with John hitting those high notes of emphasis. Hell of a way to bring a night to a close, but while it concludes the night, the guys had one trick left up their sleeves, "Wiped Out". While not part of the album of the same name, it was originally the B side of the "Don't Need Your Money" single, released two years prior. Chugging guitar and more vocal insanity. Rare chance to hear some of the off-the-beaten-path catalog, while celebrating a milestone. Long may they continue!