THE DARKNESS Step Into The Light At Webster Hall

Words and Photos by Michael Dinger 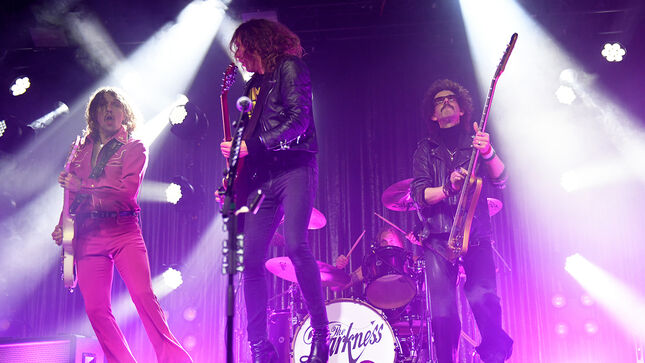 Touring in support of their seventh studio album Motorheart (Cooking Vinyl) released in the fall of last year, the hard rock outfit from Lowestoft, England known as The Darkness (originally known as Empire) performed their lone New York City area show this past Monday night at Webster Hall. As they approach the conclusion of a 34-date North American tour that kicked off on March 9 in San Diego, the band that came to prominence nearly 20 years ago is world-renowned for their live performances, and tonight would be no exception.

On a chilly evening that would soon be pounded by torrential rain, a queue of growing fans arrived outside Webster Hall more than two hours before doors along the East Village sidewalk of lower Manhattan. A landmark building constructed in 1886, Webster Hall is a unique, dual-purpose venue that functions as both nightclub and concert hall. In 2019, after having closed its doors to the public for almost two years, the iconic venue re-opened after a $10 million makeover, much to the delight of concertgoers and clubbers alike.

At 7:00 PM sharp, Webster Hall’s security team opened its friendly confines for business and patrons of all ages speedily entered the lobby before flying up the stairs to the second story stage, all hoping to land themselves in a coveted position along the front of the stage.

Providing opening support for The Darkness on their current tour were The Dead Deads, a commanding trio who call Music City their home. The up-and-coming band are on the verge of stardom, having already been noticed by Slipknot’s Corey Taylor, who co-wrote and performed on the track "Murder Ballad II," a duet featured on the album Tell Your Girls It’s Alright (Rumble Records) which was released in August 2021 to critical acclaim.

Conversing with a group of devoted fans along the stage apron, I learned that they were all part of The Dead Corps, the group’s family-style fan base. Displaying a painted trademark “X” around each eye (just as the band members do for each performance), a few of the corps members gleefully revealed that their makeup had been applied by The Dead Deads’ bassist herself, Daisy Dead. Originally a five-piece unit formed in 2013, The Dead Deads are presently rounded out by Leticia Wolf (a.k.a. Meta Dead) on vocals/guitar and McQueen Dead on drums.

The Dead Deads meld together a unique recipe of musical genres, resulting in a glorious fusion of punk, hard rock, metal, indie and grunge. With McQueen seated at her drum kit center stage, Meta at stage right and Daisy stage left, the first offering song from their 8-song set was “Thinkers and Preyers” from the aforementioned Tell Your Girls It’s Alright. Easily winning over the crowd with their explosive, raw energy set that lasted an all too short 35 minutes, highpoint songs from The Dead Deads’ set included “Dead Inside,” which is another killer tune from Tell Your Girls It’s Alright, and a rousing cover of Pink Floyd’s “In The Flesh” which led directly into “Push Me” (Sketches and Animation, 2018). The Dead Deads’ penultimate number from the night was another track from Tell Your Girls It’s Alright, “In For Blood,” featuring a metal riff perfectly balanced by a sweet melody. The Dead Deads closed their set in the usual fashion with “Nope,” taken from their first studio album released in 2014 (Rainbeau). The song is laced with Meta’s forceful vocals that range from an engaging harmony to a guttural growl that would be met with any death metal singer’s approval.

Later in the evening, The Dead Deads would be thanked by The Darkness’ frontman Justin Hawkins when he announced, “I want to say thanks to The Dead Deads who have been supporting us, because it’s a long drive between these [shows], and they’ve been doing it all on their own. They’re really out there slugging it, so you really ought to support them. It’s very good music, played by very good people.” The Dead Deads are a sonically-exhilarating band destined for a bright future that must be checked out in a live setting at your first opportunity.

Until you can, however, a gateway to their growing catalog is 2018’s The Dead Shall Dance, a live album recorded at The Cowan in their hometown of Nashville.

A few minutes past 9:00 PM, The Darkness took the stage with their customary backing entrance instrumental track playing over the house PA. Apart from some standing room in the balcony lounge, the house floor was packed from the front to the back as the always debonair Frankie Poullain (bass) was the first to appear, taking his position stage left and sporting chunky black frame glasses. He was soon followed by the shirtless Rufus Tiger Taylor (drums), son of Queen’s Roger Taylor, who waved to the audience before disappearing behind his drum kit set upon a center stage riser. Last to appear were Justin Hawkins (vocals, lead guitar) who was dressed in fuchsia cowboy-themed trousers and a button down shirt, along with his younger brother Dan (rhythm guitar) at stage right, dressed in a black leather jacket and a gold logo Thin Lizzy t-shirt.

Equipped with a falsetto scream resembling that of Freddie Mercury that was accompanied by a scorching riff played on his trusty alpine white Gibson Les Paul Custom guitar, Hawkins and his bandmates sprung into “Welcome Tae Glasgae,” the first track on their aforementioned Motorheart album. Counting off in French – un, deux, trois, quatre - The Darkness erupted into “One Way Ticket” from 2005’s One Way Ticket To Hell And Back, a song about Justin’s cocaine addiction that would result in him departing the band in 2006 and checking into a rehab center. Following his successful hiatus, the band reformed in 2011 and accompanied Lady Gaga for a tour of South America and Europe.

The crowd, already euphoric ten minutes into the show and chanting “Darkness,” “Darkness,” “Darkness,” were addressed by an inspired Hawkins for the first time, “Guess what? We’re gonna fucking blast this place.” Taken from their debut album Permission To Land (2003), which was an overnight success that put the band on the map almost two decades ago, “Growing on Me” was presented next. Over the course of 20 minutes, The Darkness blasted through a collection of six tunes covering a span of four albums, including “Open Fire” (Last Of Our Kind, 2015), “Solid Gold” (Pinewood Smile, 2017), a song about the record company industry, and “Givin’ Up,” another number from Permission To Land that according to Justin, “features the all-time favorite riff that [they] ever did by [his] younger brother Danny.”

After briefly exiting the stage while the band played on, Hawkins darted back out to us donning his second outfit of the night, a gold and sparkly, open-fronted catsuit complete with fringe. He then went on to introduce one of The Darkness’ “secret weapons” named Ian Norfolk, the two brothers’ guitar tech who suddenly appeared from his hidden, side stage perch with an acoustic guitar in hand for “Heart Explodes,” a song about losing a lover from 2019’s Easter Is Cancelled.

Hawkins is the quintessential embodiment of the rock star persona, and per usual, he was at the top of his game this evening. His flamboyant, explosive on-stage energy is truly a spectacle to behold. Coupled with killer vocal chops and exquisitely-delivered guitar solos featuring an intricate fingerpicking style, Hawkins gives The Darkness a magnificent pageantry that stands up in comparison to the likes of his biggest influences, notably Bon Scott, Steven Tyler, Robert Plant and Mick Jagger. Whether it be his dramatic gesticulations, a high-flying leap off the stage riser that would make David Lee Roth proud, or a show of strength by holding a self-supported handstand for what seemed like an eternity, he is a true showman passionate about his craft. The NYC crowd represented themselves exceptionally well too, enthusiastically belting out the infectious chorus to Permission To Land’s pop anthem titled “Friday Night,” an early smash hit for the boys from across the pond.

With their 85-minute set winding down, The Darkness did not pull any punches as they tore into the final four songs before the encore, which included fan favorite “Love Is Only a Feeling,” a power ballad from Permission To Land, “Japanese Prisoner of Love” (Pinewood Smile), a song inspired by Hawkins’ visit to Alcatraz, “Barbarian” (Last Of Our Kind) and “Get Your Hands Off My Woman” (Permission To Land), The Darkness’ first ever single which again highlighted Hawkin’s dynamic, high-end vocal range. Nearing this last song’s closing refrain, Hawkins’ playfully coached the audience to repeat the high-pitched chorus lyrics back to him, and hilarity ensued. While waving to the crowd and thanking all of us for our support, the entire band approached the front of the stage for a few brief moments before walking off.

For the next several minutes, the crowd screamed, yelled and begged for just one more song, and they would not be disappointed. But before the rest of the band would reappear for a final curtain call, including one last wardrobe change by Hawkins into another eye-popping catsuit while he also adorned a Rob Halford-esque black leather biker cap, Poullain would have the stage to himself. Also revealing a new wardrobe, Poullain donned a brilliant “smoking jacket” as he strutted onstage to mesmerize us with an electronically-overdriven and distortion-filled sonic experience. As he continued to clutch his gorgeous Gibson Thunderbird on either side with his hands, the epic bass solo came to an end as he raised the instrument high over his head while the remaining trio had suddenly rejoined him for the night’s finale.

Not long after launching into their classic track from 2003, “I Believe in a Thing Called Love,” Hawkins instructed his bandmates to halt their playing so that he could deliver a message to those in attendance grasping a phone or camera that were attempting to capture one last photograph or video before the show ended. He acknowledged that “It’s great [that you want to capture one last photograph or video with your phone or camera], because we’re awesome and I want the whole world to see us by the medium of the internet, but let’s just have a moment where we enjoy the time together. You guys made the effort to come see The Darkness and The Dead Deads tonight, and the people that you’re filming it for didn’t, so fuck those guys. This one’s for you, and literally nobody else.”

The Darkness’s Motorheart tour wraps in Boston on April 23rd and will be followed by a much-needed rest in May. The British quartet will then hit the road again from June through September, taking them to the Netherlands, Sweden, Isle Of Man, United Kingdom, France, Norway, Belgium and Spain. Several tour stops along the way will also include major festival dates, such as the Download Festival (June 12), Hellfest (June 18), Alcatraz Festival (August 12) and Raismesfest (September 10).