A Man For All Seasons - JEFF BECK In The 1960s Documentary Coming In February; Video Trailer Streaming 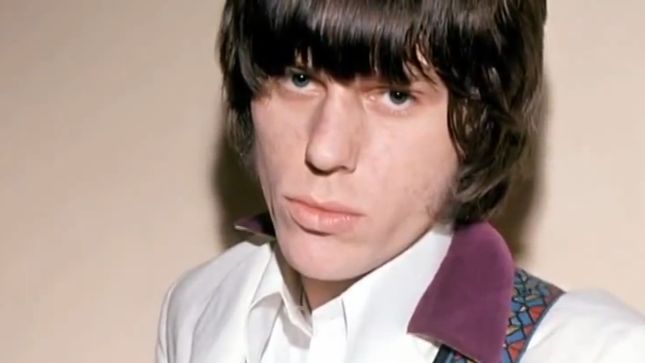 At the end of 1964, celebrated guitar maestro Eric Clapton left the Yardbirds, a band still searching for their first hit. His replacement was a player of very different capabilities - a technical and sonic pioneer who helped propel the group from their former status as a blues covers act to become one of the most innovative and daring musical collectives working in the UK.

This film traces Jeff Beck's music and career throughout the 1960s - his formative influences and early groups, his work with The Yardbirds, his brief, bizarre reinvention by producer Mickie Most as a solo pop star, and the first, radical incarnation of the Jeff Beck Group, during which he played alongside vocalist Rod Stewart and second guitarist Ron Wood.

Featuring a plethora of rare performance and studio footage, exclusive interviews, contributions from those who worked with and alongside Jeff during this period and a host of other features, all of which combine to make this documentary - the first yet to singularly focus on Beck's career  - a legitimate tribute and enthralling history of this often underrated musician, writer and performer.

Jeff Beck will headline a string of solo dates, beginning April 16th with a pair of intimate engagements in Huntington, New York before wrapping up on April 26th in Greensburg, PA. Beginning April 30th in Cedar Park, TX, Beck and ZZ Top will make-up the rescheduled dates from this past September when the hugely successful double-bill tour was cut short due to an unfortunate injury to ZZ Top bassist, Dusty Hill.

“We’re so glad that Dusty made a full recovery and now, we are looking forward to getting back out there and finish what we started,” stated Beck.

Beck's career took off in the mid-1960s, after replacing Eric Clapton as lead guitarist for The Yardbirds on the recommendation of his friend Jimmy Page. He played on several of the rock group's hits, such as "Heart Full of Soul," "Shapes of Things" and "Over Under Sideways Down." Over the years, Beck has collaborated with Stevie Wonder, Diana Ross, Mick Jagger, Tina Turner, Roger Waters, Les Paul, Jon Bon Jovi, Stanley Clarke, Herbie Hancock and Joss Stone among many others.

Beck has twice been inducted into the Rock And Roll Hall Of Fame: once with The Yardbirds in 1992 and once as a solo artist in 2009. He has won numerous Grammy Awards, including two at the 2011 Grammy Award Celebration when he won Best Rock Instrumental Performance for “Hammerhead” and Best Pop Instrumental performance for “Nessun Dorma”, both from his last studio album, Emotion & Commotion.

Recently, in London, Beck participated in The Poppy Appeal song "No Man's Land", a tribute to the men and women that served in World War I, resulting in 4 performances, culminating in the NFL pre-game entertainment that was broadcast from Wembley Stadium. The song featured singer Joss Stone on vocals and a gospel choir with vocals arranged by Antonia Wilson. For Beck, 2015 looks to be a banner year. In addition to both solo and co-headlining dates with ZZ Top, Beck will complete work on his new studio album, expected next year.

Joining Beck on both the solo and double-bill tour are his band - Jimmy Hall on Vocals, Rhonda Smith on bass, Jonathan Joseph on drums and Nicolas Meier on guitar.


On November 24th, Eagle Rock Entertainment released Live In Tokyo by Jeff Beck on DVD, Blu-ray, and digital formats. The show features Jeff Beck with his new band performing some brand new, as yet unreleased, material. The set also includes “Stratus”, “Led Boots”, “Cause We Ended As Lovers”, “Big Block”, “A Day In The Life”, “Rollin’ And Tumblin’” and many more.

Check out the Emotion & Commotion song "Hammerhead" below:

Jeff Beck is undeniably one of the world’s greatest guitar players. Technically brilliant, he is renowned for pushing musical boundaries and has excelled across many different genres from rock and jazz to pop and blues. His versatility and unmatched musicianship is captured beautifully on Live In Tokyo.

Filmed at the Tokyo Dome City Hall in Japan on April 9th 2014, these Japanese dates were the first to feature Jeff Beck’s new backing band of Jonathan Joseph (drums), Nicolas Meier (guitars) and Rhonda Smith (bass). The setlist includes some freshly minted songs that fans will never have heard before. In contrast to Beck’s previous visual releases, Performing This Week... Live At Ronnie Scott’s and Rock ‘N’ Roll Party (Eagle Rock Entertainment), which both filmed in small clubs, Live In Tokyo is filmed in a major concert arena and has a very different, more expansive feel.

"You Know You Know"

"Cause We Ended As Lovers"

"Why Give It Away"