AC/DC Guitarist MALCOLM YOUNG Discusses The Band's Early Days In Previously Unpublished Interview On The Coda Collection - "We Were Going To Play Rock ‘N’ Roll, It Was Simple As That" 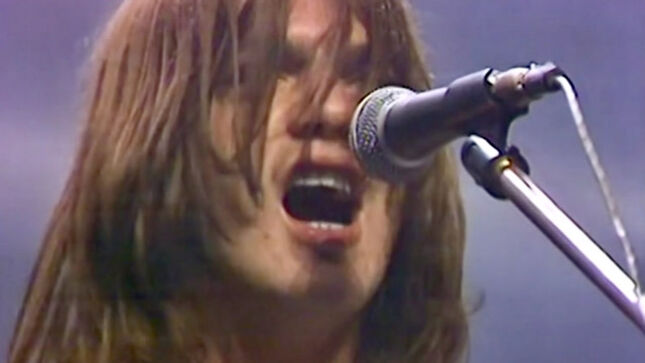 The Coda Collection features seven hours of video documenting AC/DC’s various eras in addition to an in-depth collection of essays + a never-before-published interview with the band’s co-founder and driving force - the late Malcolm Young.

In the newly unearthed interview, Young discusses growing up in Australia, being influenced by the blues, the group’s early shows, how he meshed with Angus as a guitar player, how Bon Scott fit in with the group, and more.

Highlights from the interview below:

Malcolm on AC/DC’s early days in the early 70’s: "All we were doing is trying to entertain people. When we started as a band we were told by club owners: “We want people to dance so they drink more.” That’s how we cut our teeth - getting people hot and sweaty and drinking. We stayed on that same thing. People paid money for tickets and we’ve never forgotten that. Anything after that was a bonus. We were just a club band. As things evolve, you evolve with it."

On discovering music growing up in Australia: "You felt cut off from the rest of the world in the early ‘60s. You got the hits from America two months later. We had all these mini-stars who dominated the TV. We got the Top 20 on the short-wave radio, Radio Luxembourg. We’d tune in to find what was really happening in the music world. We saw The Beatles on TV in Glasgow before they had a hit, and before we left for Australia. Six months later we found out about them when they hit big. It took about six months for it to catch on in Australia."

On how blues influenced him: "I’d heard Chicago blues from my brothers. One of them, John, loved Big Bill Broonzy. You start picking up other names from the albums and listening to them. We could relate to that music. It doesn’t seem a lot these days, but when a family uproots itself and moves to the other side of the world because your dad couldn’t get a job, you didn’t feel part of the system, if there even was a system. It was a bit of a struggle in many ways. We related to what the blues singers were saying. They could make you laugh. It was just about everyday life, and that pushed a button. We just fell right into it."

On the first step towards forming a band with Angus: "We never really played together. I was more into The Beatles and Stones, and Angus was more into the heavier stuff, Hendrix and Cream, with the lead guitar. I used to listen to songs as songs - the drums, the vocal, the music side of it. I tended to pick up on the chords, the whole picture around the guitar. It just happened at one point when I was putting together a band. We were going to get a keyboard player, but I got Angus instead (laughs). Angus had his own band, a little rock outfit, but they just packed it in. He told me they were finished, and I said, “Come down tomorrow and have a bash.” We were going to play rock ‘n’ roll, it was simple as that. When Angus came in, it was a big piece. He hadn’t come into his stage act yet. George and my sister helped him a lot with that. They said, “You gotta have a gimmick, Angus.” They thought a good act always had something people could relate to. My sister said, “Why don’t you get your school uniform with the shorts?” She knocked that up for him and this little guy became larger than life. Believe me, he can fire up. It’s not an act. He takes it on full. I don’t think anyone could become that intense method acting. That’s what people expect and he does it. Even I don’t know how he gets himself into that state."

On AC/DC’s early shows: "We had a good thing with the clubs. Rowdy, mad, brawling Aussies...it made Angus do it more. By the end of the night everyone was won over. He wore the outfit, but he could play that guitar. We used to go to clubs and check out what was going on, and none of them were playing music that was getting people up and rocking and dancing. People would dance to the records between the bands. We thought, this is rock ‘n’ roll. (The Rolling Stones’) “Jumpin’ Jack Flash” would come on the jukebox, and the dancefloor would be filled. All the bands were doing that hippie period of music, that hippie hangover stuff. They didn’t have a clue. It was just wide open for us. The very first show, the very first song we did, we had them won over. We’d play “Jumpin’ Jack Flash,” and jam in the middle, drag it out, some Little Richard, “Great Balls of Fire,” a couple more Stones tracks. Stuff we all roughly knew. Have a quick bash, and we just bluffed our way through. As long as they were up dancing, we were doing our job. The more they dance, the more they drink. Everyone was really happy. Everywhere we played, we were getting offers for residencies. The band was up and running. Melbourne, which is a bit like L.A. and London in size, there were people calling us in Sydney asking about the band. We were moving up quickly. At the time we weren’t fazed. It was like, “Oh, good, another gig.”

On how he meshed with Angus as a guitar player: "I was more into the chord thing, the complete song, rather than the individual part. I was glad in a way, because I was more of a melodic player. Angus was more into the rock world. Straightaway I said this is great. There was never any question. I thought Angus, it’s pointless for me to play solos. It was never a brotherly squabble, but the opposite, because we just wanted to do good as a band."

On being in a band with his brother: "It’s not that dramatic. We have our moments. That’s what we do, knowing each other all our lives. But it’s got a lot of big pluses. Brothers do fight, but there is a closeness too. Within the band, a little bit of aggro rears its ugly head. But it’s certainly not a major problem for AC/DC. During the making of the albums it’s the worst, because everyone is under a bit of pressure. You’re in a confined area and things happen. We’re pretty lucky overall with that though."

On how Bon Scott fit in with the group: "Bon basically took charge, to be honest. He was older and he’d been around in another band. He was the man of experience. We’d written one or two songs, and he encouraged us to write more. He’d say, “I’ve got an idea about that motherfucking wife I’ve left: ‘She’s Got Balls.’” We’d already written some tracks, but when he came in, we had the voice of experience. We kept our ears wide open. He pushed us a little further. The first singer (Dave Evans), people cheered when he left, so we could jam. He was so bad. Bon was in a week later. He had songs, ideas, motivation. He’s serious. We were happy to be with someone like that. We were just happy to be playing. He had bigger plans."

Check out the full conversation here and the full list of AC/DC titles available to stream on The Coda Collection here.