ACE FREHLEY Talks BRUCE KULICK Guesting On New Album - "When He Found Out I Was Doing Origins Vol. 2 He Wanted To Be A Part Of It" 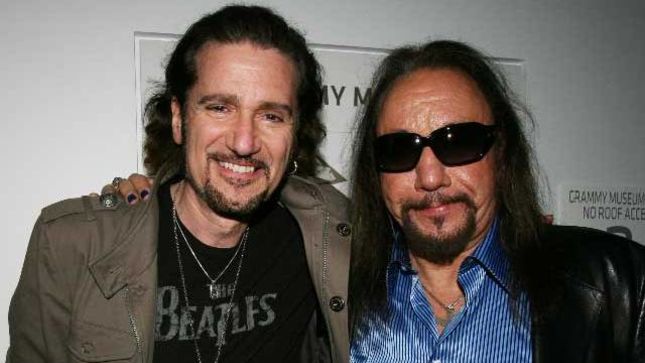 Founding KISS guitarist and Rock And Roll Hall Of Fame member, Ace Frehley, will release his highly-anticipated second collection of eleven rock 'n' roll covers, Origins Vol. 2, on September 18 via Entertainment One (eOne). Metal Express Radio's Mick Burgess caught up with Ace to talk about the new album, and those artists and musicians that first inspired him to form a band back in the ’60s. Following is an excerpt from the interview.

MER: Have you recorded the songs on Vol. 2 recently or are some of the recordings from the Vol. 1 sessions?

Ace: "We actually recorded 'Space Truckin'' and 'We Gotta Get Out Of This Place' a couple of years ago for Origins Vol. 1 but they didn’t make. I just rearranged them and redid the guitar solos and spruced up the vocals a little and they ended up sounding better so we decided to put them on this one and now the record company is talking about an Origins Vol. 3, it’s like a never-ending saga. These albums are a lot of fun for me as I grew up listening to the songs and performed them in my covers band, and the fans seem to love them as well. I’m introducing the songs that influenced me to young fans, encouraging them to go back and discover music from the ’60’s, which is great."

MER: Bruce Kulick plays guitar on a couple of songs. Bruce, of course, is a fellow ex-KISS member.  Do you recall your first meeting?

Ace: "Bruce is a good friend. I met him years ago. I played a guitar solo on an album he did with my old guitar player, Karl Cochran, in a band called ESP and Eric Singer was the drummer. When I did the KISS Kruise a couple of years ago Bruce was on that as well. When he found out I was doing Origins Vol. 2 he wanted to be a part of it so I let him pick the song and he thought 'Manic Depression' would be a good one. I think he made a great choice."

MER: Bruce’s brother Bob, who recently passed away, played on a few KISS songs while you were still in the band. Did you know Bob very well?

Ace: "I didn’t know Bob that well, but I was friends with him and jammed with him a couple of times. Believe it or not, but when I auditioned for KISS, Bob was also auditioning for KISS and he was actually playing when I walked into the room. I was intimidated by how great of a guitar player he was. Paul and Gene decided that I fit the band better because I had the right image. Of course, I could play and I pulled everything out of my hat. When they played 'Deuce', I just ripped every riff that I knew and did a 5-minute guitar solo. Paul told me that they knew immediately that I was the one but they didn’t let me know for two weeks. They kept me hanging on."

MER: You’ve also covered one of KISS' songs, "She" When the song was originally written it was a Wicked Lester song with flutes and strings. Did you hear that version before you recorded it with KISS?