ADRIAN VANDENBERG On Being Unable To Record Guitars For WHITESNAKE's Slip Of The Tongue Album - "It Was Incredibly Frustrating; I'm Very Happy That STEVE VAI Played The Guitar Parts" 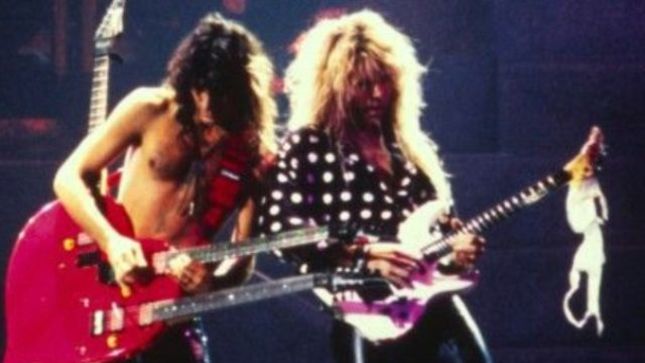 Former Whitesnake guitarist Adrian Vandenberg spoke with Kylie Olsson for Life In Six Strings, and during the conversation he looked back on the injury that orevented him from playing on the band's 1989 album, Slip Of The Tongue. Guitar duties were taken over by Steve Vai for the record.

Vandenberg: "It was incredibly frustrating. What happened was - I only found out actually in 2000, so 10 years later, what the actual problem was. And then I had surgery. I was in a car crash in the early '80s and apparently, I developed a whiplash, but nobody told me. I had pain in my neck for a couple of weeks and then the pain went away, and I thought, 'Well, that was it.' But apparently, I had two neck hernias resulting from that, and they were pushing against the nerves that go to my right hand. So at one point, my wrist just kind of stopped.

The surgeon compared it to a garden hose - you double it over here and you double it again over there, and there's no water coming out. The nerves didn't have enough time to send back the signal, so to speak. So yeah, that was a big bummer, of course. I'm very happy that Steve, a player of his caliber, played the guitar parts. And Steve and I have become good friends on the road, so we're in touch and everything.

It's just one of those unfortunate things that make life worth living. You got your ups and downs."

Vandenberg recently guested on the Eddie Trunk Podcast, and during the chat he looked back on recording guitar parts for "Here I Go Again", the smash hit from Whitesnake's self-titled album released in 1987. All guitar parts on the album were recorded by John Sykes except for the breakthrough single.